Treasure carp scale is a special item in Sekiro: Shadows Die Twice. It can be obtained by hunting down a rare, red carp. It may seem like a useless trinket, but you can actually use them to buy mask fragments from a certain NPC who collects them. However, you’ll need to kill the treasure carp before it swims off into the murk. Additionally, they won’t respawn after you kill them. This guide is going to show you a list of all Sekiro treasure carp scale locations, so you can stockpile this rare resource.

How to get mask fragment – Pot Noble merchant

The reason you’re collecting the scales in the first place are the Dancing Dragon mask fragments. You can buy these from the two Pot Noble merchants – one is near the Estate Path idol in Hirata Estate, the other by the Near Pot Noble idol in Fountainhead Palace. Each of them sells a single fragment, and when you get both (along with the third, which is sold for sen), you’ll be able to piece together the ancient artifact.

How to kill underwater treasure carp

Although some scales can be found as ground loot, you’ll get most from killing red carps. They are pretty timid, and you’ll have to either approach them stealthily, or quickly. If they run away, just let them calm down before trying again. One hit from your sword is all it takes.

However, there are also underwater treasure carps who swim in the deep. To get to these, you’ll have to get the ability to hold your breath for extended periods of time. This skill is acquired in Ashina Depths, and if you need detailed instructions on the location, check out our guide on how to dive.

We found the first five carp scales in Hirata Estate. As you cross the big bridge, turn right and go down to the bank. Look to the other side and you’ll see a giant pink carp swimming around. If you follow the river away from the bridge, you’ll soon find a couple of boats on the beach. If you stand on the boats and toss a fistful of ash into the water, a carp will appear. After you get him, jump into the water there and swim to the big rock in the middle of the river. There will be a carp in the reeds there, near the scale vendor.

Return to the bridge and cross it again. Jump off to the right once you’re on the other side, and look for an item on the beach, next to a big rock. It’s a treasure carp scale, even though it’s not one with the fish anymore. The next one is near the Bamboo Thicket Slope idol. Start from the idol and climb the wall on the left using the grappling hook. Jump into the water and swim under the bridge. The carp will be near the waterfall, and you can use the ledge to sneak up to it. There’s another one under the water there – you’ll have to dive for it. If you prefer a video guide, check this one out.

You can find two more scales at Senpou Temple. Spawn at the Temple Ground idol and head down the stairs. Go past the building and jump into the pond at the bottom of the cliff. The carp will be there.

There’s also a trio of scales in the Sunken Valley area. Before you can get them, you’ll need a certain key – you’ll get it after beating Genichiro. Talk to Kuro, then visit Isshin at the castle. Return to Kuro’s room, and you’ll find the key there. Once you have it, spawn at the Gun Fort idol, then go down the stairs, past the place where you fought the Long-Arm Centipede Giraffe. Open the door and jump off the broken bridge and into the pond. You’ll find two scales on swimming carps, and another one as an item, at the bottom of the lake near the Riven Cave idol.

You can buy one from the Exiled Memorial Mob. If you jump into the stream next to him and head left, you can get another from the ground next to the first enemy you encounter. There’s a third one as well, on a carp this time, near the bridge that crosses the village river.

You can get 5 scales if you give the monk in Mibu Village (the one with a shinobi door in the floor of his house) a key item called Water of The Palace. Once you give it to him, leave the area, then return. He’ll turn hostile, and when you kill him, he’ll drop the scales. To get the item, you need to go to Fountainhead Palace. It’s near the Flower Viewing Platform idol – spawn there and go into the yard behind you. On the right, you’ll notice a hole filled with water. Dive in, and you’ll end up inside a building. The item will be in a chest there.

We’ve only found two carp scales at the castle, and both were in the moat – one on a fish, another as a pickup. Spawn at the Upper Town Antechamber idol, then go out the window and onto the roof. Drop down into the moat and look for a carp among the hostile fish there. The pickup should be near the place where you dove in. 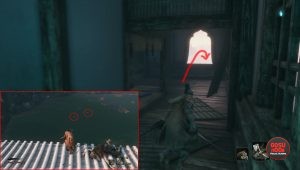 You can get three scales from the room where you get the Water of The Palace (see Ashina Depths section for images). There’s another ten or so in the area’s main body of water – just take your time and explore the whole lake, especially around sunken buildings and other interesting objects, like the giant carp skeleton.

Finally, you can get four more by feeding two pieces of Precious Bait to the Giant Carp. Go to the Feeding Grounds idol, ring the bell and give the bait to the fish once it appears. Talk to the NPC that tends to the grounds, and he’ll give you the scales (one for the first, three for the second bait). 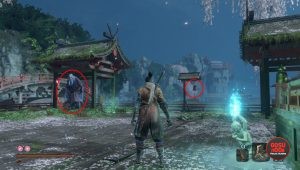 NEXT POSTSekiro Lapis Lazuli – How to Get Prosthetic Tool Upgrade Material