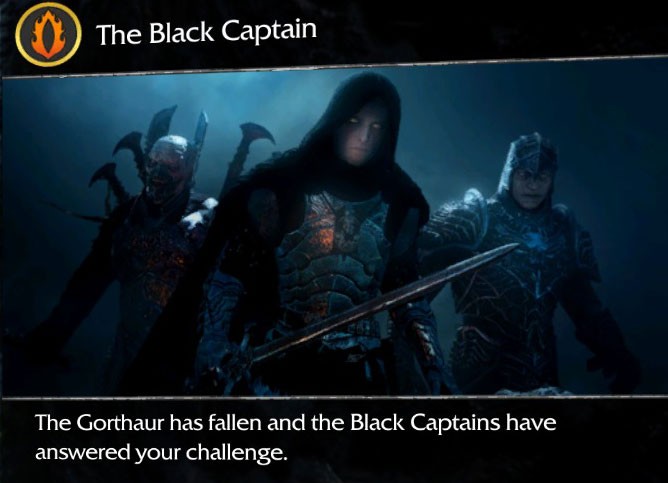 The Black Captain is the last mission in Udun zone of the game and it sends you fighting against the Black Captain that slaughtered your family. Black Captain is similar to other Warchief fights with the exception being that you do not have to discover his bodyguards and you can join the fight right away. Mission becomes available after you complete The Dark Monument and after it you will be able to visit a new zone with all new Sauron’s army and collectibles and towers to discover.

How to kill the Black Captain?

The Black Captain can be a tough fight and he has several mechanics you should be aware of. There will always be about 8 orcs accompanying him. You use them to build up your combo multiplier up to 8x so you can execute some of your more advanced moves. I highly recommend that by this time you unlock Execution Ranger ability and possibly Wraith Flash Wraith ability. They are both used once you fill up your combo hits up to eight. Hit orcs and do Execute on the boss. This takes away a lot of his hit points, especially compared to regular attacks which seem to take almost no hit points away from the Black Captain. Captain will attack you with his melee attack frequently and you should listen to a sound cue that announces his attack and watch for the counter attack icon above his head to make sure you do not get hit by his melee attacks. If you do get hit your hit counter resets and he can really hurt your health points. Second ability the captain has is a long range fireball type of attack which you can dodge with another button (X on the PS4), but sometimes this attack is just very hard to avoid. Luckily he does not do it that frequently. Once you do enough execute attacks on the Captain and take away a certain percentage of his health he will do this black sphere AOE attack that knocks you back and invites the next wave of Orcs to join the fight. Just make sure you connect 8 hits on the orcs and do the execute as often as possible on the Captain and you will get him down in no time. Enjoy your revenge ranger, because new land and adventure awaits you.