Fairly early in Shadow of the Tomb Raider you will play as young Lara in Croft Manor and face one of the harder puzzles in the game called the White Queen Mystery. Tomb Rider games do not lack in puzzles and you should be used to solving them by now, but this one, for some reason, had me stumped for a while. You play as young Lara, exploring the Croft Manor, and you pick up various documents and clues along the way. One of them tells of the White Queen Mystery and as soon as you enter the main house you will see that the solution lies within. To prevent you from spending too much time pondering which chess piece goes where and how to release the White Queen from her ladder prison here’s a short guide. 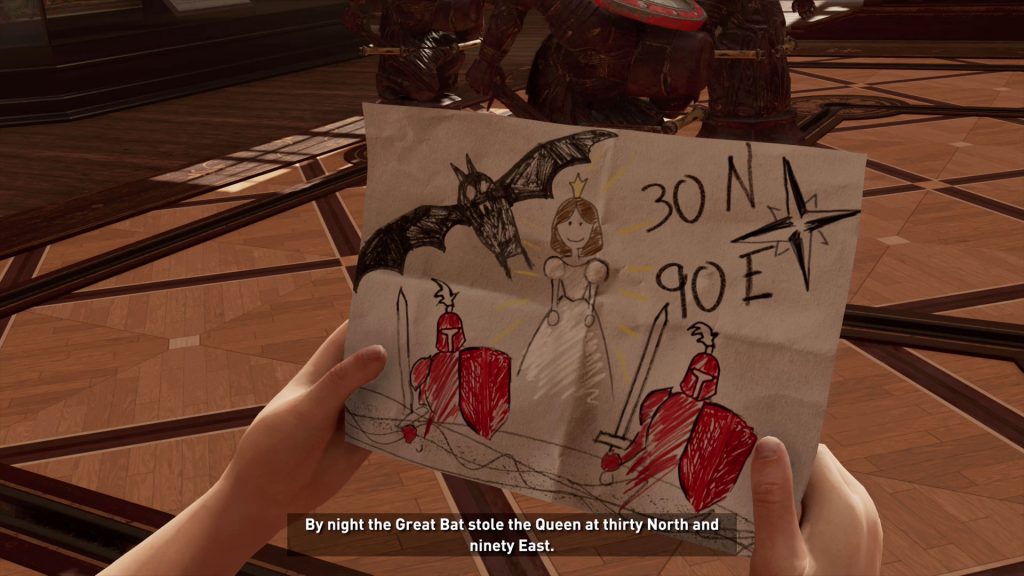 There are five steps to solving this puzzle. They all derive from the child painting called White Queen Mystery and the elements you can interact with in the main Croft Manor museum room. You will need to interact with the chess pieces, big globe and the Leonardo da Vinci like flying machine on the ceiling. The clues given tell us that the two knights need to stand on each side of the queen. There is also a bit cryptic clue saying N 30, E 90. Finally, there’s a painting on the wall depicting a game containing something similar to chess pieces with two knights standing on the corners of the inside square and a white queen standing between them. It is rather obvious that you need to move the chess piece like figures that resemble knights holding shields into the corners of the inside square on the floor. What is next?

How to solve the White Queen puzzle in Croft Manor?

Here’s a list of steps you need to take to solve it:

For whatever reason I spend a ridiculous amount of time trying to figure out how to raise the ladder. I did not notice when I operated the globe that it was this manipulation that dropped the ladder in the first place. After interacting with every possible thing in the room, I decided to move the globe. Imagine how happy I was when the ladder moved and I was able to move the White Queen into its place. Emotional custscene afterwards was just a great ending to another Lara Croft adventure.

PREVIOUS POSTWhistle In The Dark Challenge – Shadow of Tomb Raider

NEXT POSTShadow of the Tomb Raider Where to find preorder bonuses