I’ve spent 200 hours in Skyrim back in 2011 and 2012. When we got Skyrim VR, the 2017 version of the game created for Playstation VR, I let out a long sigh, thinking there is nothing this game has that I haven’t seen before. Still, curiosity got the better of me, and I dove back into Tamriel once again, hoping that the game still has something to offer. The PSVR is a great gaming experience, but I haven’t really touched it for a while, because there just weren’t enough exciting games for me to play. There is a severe lack of AAA titles, made by well-established developers, and ever since Resident Evil 7, I haven’t really been excited about anything on the PSVR. Bethesda, in its push to make Skyrim playable on pretty much anything with a processor, decided to release a VR version of Skyrim. I, for one, am glad they did. 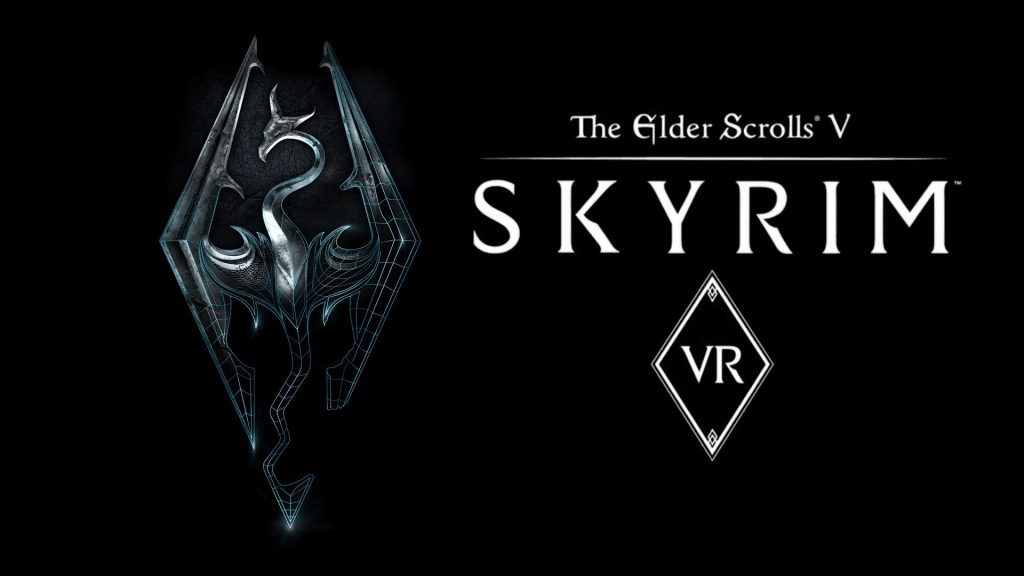 Having to describe VR in words, or even pictures and video, is a difficult thing to do. You really need to experience it for yourself to be able to truly understand the difference. The best I can do is tell you that you feel like you are really there. This is why the opening scenes of the game, when you ride with Ulfric Stormcloak to your execution, is a wonderful thing to live through again. I played through that part of the game so many times, that I really just wanted to get it done with, but having to sit in that wagon, looking around the land in VR for the first time, made me feel truly great. By the time you create your character and run from the dragon, you see that VR is a fantastic device for these types of games. That added dimension of feeling like you are present as the events unfold made the beginning of the game interesting and fun again.

The game is pretty much the same as you remember it. There are some interface changes to help the VR experience, but everything felt quite familiar right off the bat. If you use the DualShock controller, playing the game is no different from the regular version. Yes, the skills section and the map have the added VR dimension that is fantastic; and, yes, to see the in-game radar, you have to look down and it is not in your view all the time, but this helps the immersion and is justified. Just as I got accustomed to playing the game this way and was starting to think I am replaying the same game I played all those years ago, two things happened that made me really appreciate the whole thing. 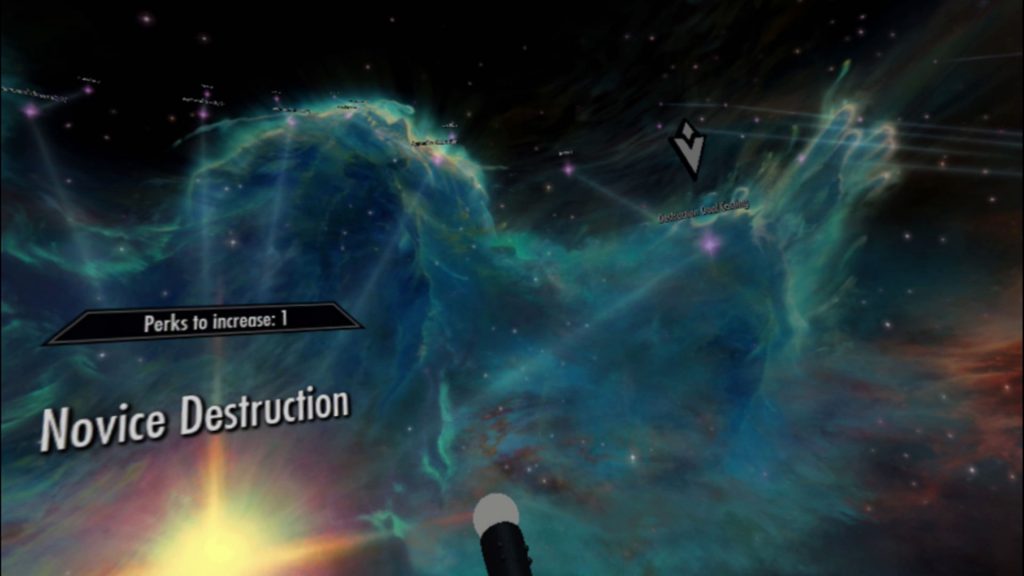 I met my first giant, and, as any Skyrim player does, I attacked him to get launched into the air. It is always great fun and I was curious to see what will happen in VR. The regular version would just show your corpse flying away into the clouds as the rag-doll effect keeps your body spinning. In VR, you are launched like a rocket, and can see the land stay below you and everything getting smaller until dark takes over. It was just great fun to experience something like the giant launch this way.

The second thing I did is, I switched to the PlayStation Move controller. This was the best decision I made, because with those, you get to separately control each of your virtual hands.This brings immersion to a whole new level. It takes some adjustment to the control scheme before things start feeling natural, but boy is it fun. With the Move controller, you actually have to swing your hand if you want to swing your sword at somebody. You have to actually put your hand into position to block with a shield. And magic, oh the magic usage. It is one of the most fun gaming experiences I’ve had. I’ve equipped a lightning spell in my left and a fire spell in my right hand. In VR, you see these two hands floating in front of you and moving as you move the controllers with your real life hands (that felt awkward to write). They are extensions of your own hands and your eyes are telling you that you have sparks and flames coming out of them. This synergy of real body movement and your eyes telling you that you are doing something out of the ordinary is what makes it, oh so fun. When you press the button on the controller, actual lightning and fire coming bursting out, and you scorch everything that you point your real life hands at. It is an amazing feeling of power and sheer excitement that had me squeaking like a child for an hour straight. That is about how long it took me to clear my first dungeon. 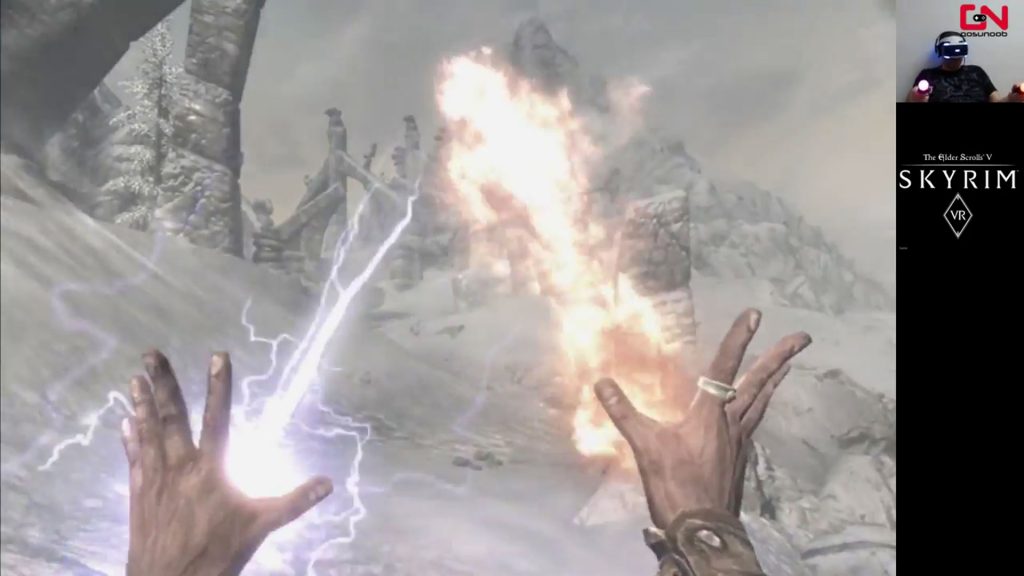 Even dungeons can be appreciated in a new way in VR. The grandeur of architecture really pops out now. Before, it was just some archways, but in VR, you can truly appreciate the size and scale of it all. The huge rocks that were used in building that archway have a presence they didn’t have on a flat screen. The engravements on the huge dungeon doors are spectacular. You can almost smell the mold in the dungeon and taste the bone meal dropping from Draugrs.

VR makes Skyrim fresh and worth playing through again. The graphics do feel a bit outdated. You probably played through it all before. Motion sickness is still a problem with VR (but the teleportation movement you have as an option with Move controllers really helps with this). But, I had freaking fire blasting out of my hands! It felt real. It was great fun! I did not actively pursue owning a VR set, nor playing Skyrim on it. Through circumstance, I found myself doing just that, and it was one of the best and the most fun gaming experiences I’ve had in years. The only worry I have is that I can spend hundreds of hours in Skyrim, because there are that many things you can do in this game. Doing it in virtual reality just can’t be healthy. I will not be able to discern whether I am a magic-wielding Breton or a gaming website writer anymore. Isn’t that the ultimate gaming experience, though?

Veterans of Skyrim will probably have a blast, but will ultimately get tired of it quick, because it is hard to start all over again knowing what lies ahead. Novelty of the VR experience will surely fade away after 20 or so hours of gameplay. For some though, this will be a great return to the land of the Nords. Those of you that never played Skyrim, and own a PSVR, this is a must have title. If you have any love of RPG games, Skyrim is one of the greatest, and experiencing it this way will justify owning a PSVR for dozens of hours. Just remember to take regular breaks for your health’s sake. For the first time PSVR, as a gadget, made sense (outside of playing horror games). It gave new depth to your gaming and the role playing in RPG has just gained a whole new level of immersion.

Here’s a recording of a Livestream I did while playing Skyrim VR. I recommend you watch from minute 47 onward, because that is when I start using magic and go towards the first dungeon in the game. If you want some more information and impressions about the whole VR experience make sure you watch the start of the video as well.