Denizan Icarus is a side quest in Temtem. In it, you’ll have to help a guy get some aerial shots of Deniz. He wants to train a flying Temtem to use a camera, and your task will be to provide him with a suitable specimen – a Barnshe, in fact. Since Barnshe is a rare creature, and the guy won’t give you any pointers, you might have trouble finding it. This guide is going to help you complete the Temtem Denizan Icarus side quest by helping you tame a Barnshe.

How to start Denizan Icarus side quest?

You can start the quest by talking to Daedalus, and NPC in the Thalassian Cliffs. He can be found standing around, lost in thought, on the edge of the cliff overlooking the beach. Talk to him, and he’ll tell you all about his plan to get aerial photos of the land. He can’t afford a blimp, but he could use a flying Temtem. Even if you try to offer him more affordable options, like the Pigepic, or the Paharo, he’ll insist on a Barnshe.

As far as we know, there’s only one place you can find a Barnshe, and it’s the Windward Fort. It can appear at the top floor, where the boss fight against Lady Lottie takes place. However, it has a pretty slim chance of appearing, thanks to it being considered very rare. Which means you’ll have to spend some time here, running around, fighting random enemies, until your prey appears. It has a 5% chance of appearing, so you might have to stick around a bit. 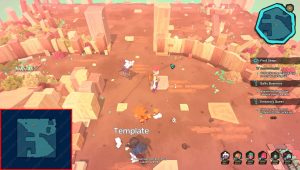 Make sure you have enough TemCards on you – since it appears so rarely, it would be a shame to miss the opportunity to catch it, just because you can unprepared. Getting a second chance might take even longer, so take care not to waste your first.