The Last Guardian has finally seen the light of day. Sony first slated it for 2011. Since then, it’s been delayed time and again, so much so that many of us were beginning to think it’d never come out. And here it is, at long last. Was it worth it? Have Fumito Ueda and the rest of Team Ico delivered another true masterpiece? Well… let’s just dive in.

A spiritual sequel to Ico and Shadow Of The Colossus, The Last Guardian is another action-adventure puzzle game by Team Ico. Just like its predecessors, it’s abound with clever environmental puzzles, innovative gameplay mechanics, and visual storytelling. It is, however, marred by finicky controls and severe camera and frame rate issues, just like its predecessors.

The plot of The Last Guardian is pretty brilliant in its simplicity and elegance. You wake up in a cave, covered in strange tattoos, with no memory. Next to you is a gigantic, winged, man-eating beast, howling in pain and snapping at you. Insert your own Friday night joke here. However, you soon learn how to appease the beast called Trico (Trico is the name of the whole species, I think). You feed it, remove the spears from its side, and release it from his chains.
From then on, it is up to the two of you to escape the ruins and uncover the mysteries they hide. It’s a truly touching story of the unlikely friendship blooming from mutual apprehension to acts of self-sacrifice for each other. 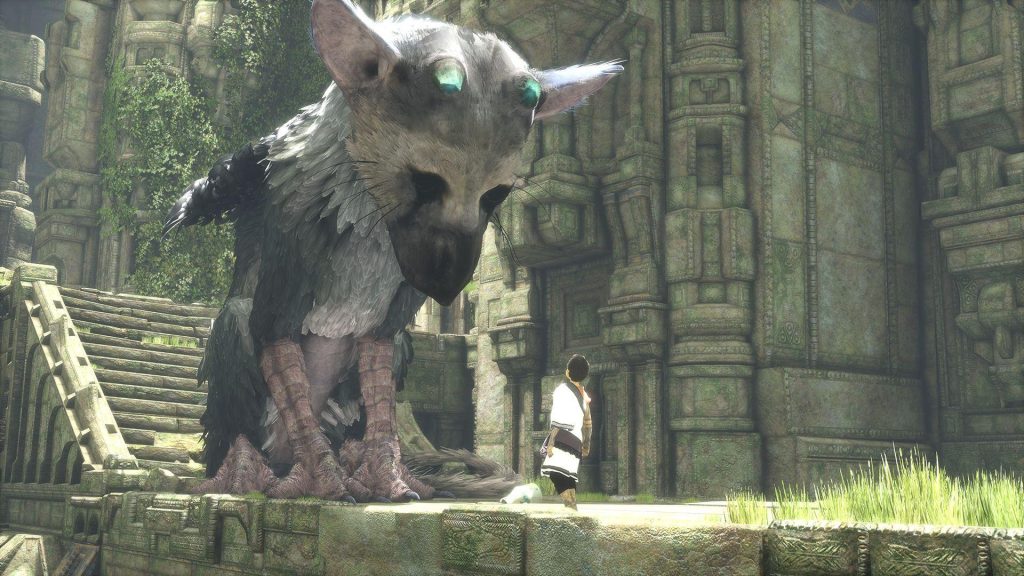 Let’s start with the positive aspects of the game. First off, the game looks absolutely gorgeous. The lighting is superb, the colors are wonderful and vibrant. The animations of Trico are mind-boggling. Every single feather is animated. His movements perfectly mimic that of a dog and/or cat, so much so that you can easily tell how it’s feeling just by looking at it.
The environments are stunning as well. The ruins are all one huge complex, and you will feel it. As you explore around, you’ll revisit some locations, or see them from different angles. You really are exploring a deserted city, not just a game level. The ruins themselves are awe-inspiring, just like in all the other Team Ico games. I often found myself completely lost in the game’s world, exploring the sprawling ruins with my big birdcatdog.

The AI on Trico is… breathtaking. It really feels like a living, thinking creature is by your side. This, coupled with the environment design, really sells the immersion. Trico won’t always listen to you. He’ll go off on his own, and sometimes solve the puzzles for you. When you issue a command, he will look at you and you’ll really feel like he’s trying to understand you. As the game progresses, he will respond to your commands much quicker, compounding the feeling of friendship. The AI never gets stuck, he never clips through anything, and it just feels like you’re walking with a sentient creature. It’s an amazing experience. Also, he’s absolutely freaking adorable.

The puzzles are environmental and most of them are incredibly clever. The one that stands out for me most is the one where you’re supposed to make Trico jump into a pool and ride the wave onto a platform to flip a switch. I felt so smart.

The story is told almost exclusively visually, as is Team Ico tradition. By the end of it, you’ll have understood enough to get the plot, but a lot of elements will remain open to interpretation. And the story is majestic. It’s frightening and heartwarming. Every single cinematic moment when Trico or the boy where in trouble had me literally gripping the edge of my seat. I felt every moment of the game as if it were happening to me or my dog. I bit my nails, winced and even shouted “NO!” several times, much to the delight of my colleagues in the office that were trying to work. I was living in that world, escaping a ruined castle with the help of my feathered friend. The experience this game provides just cannot be matched, and nobody does this like Team Ico. 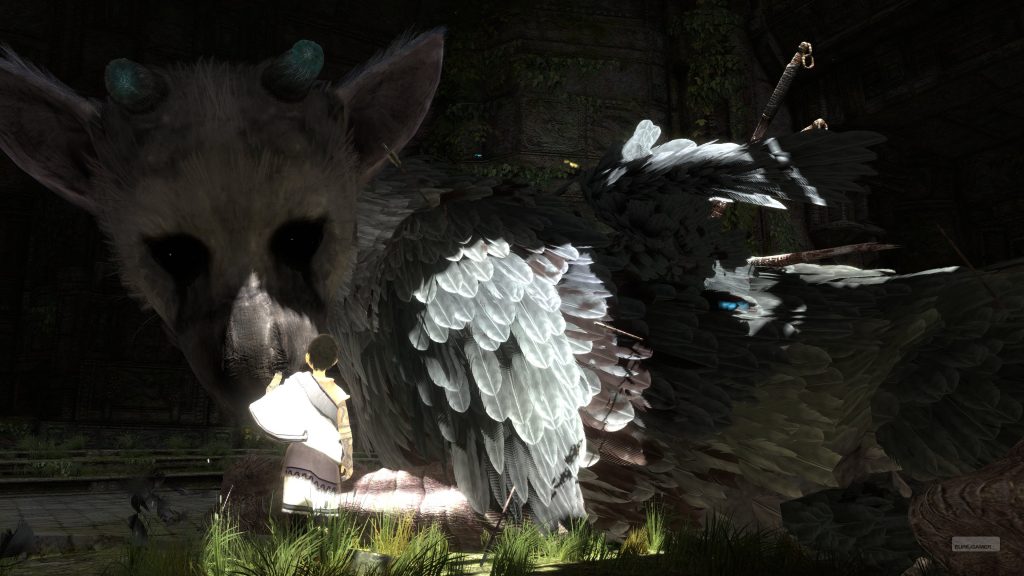 All of this said, this game is leagues away from the perfection we all wanted.

First off, while Trico’s AI is a fascinating feat of programming, sometimes it does get a little too real. Even at the game’s slow pace, sometimes waiting for Trico to execute a command would get annoying. Often, I’d give up and try different solutions to a puzzle, only to come back to my first idea and it turned out to be right. Trico just didn’t feel like doing it.
Other times, I’d be looking fruitlessly for anything to interact with, only to turn around and see that Trico had pissed off in a totally different direction without me. I understand this adds a lot of realism, but come on.
On top of that, once or twice, Trico just got stuck. No matter how much I tried, he just wouldn’t move. A restart from the checkpoint fixed it easily, though. And, in the end, I really didn’t feel like the game was messing with me, I felt like I was trying to get a wild animal to obey me.

Trico being stubborn I can take. Controlling the boy is a whole different story. The controls are passable most of the time. However, once you get to precision platforming, everything goes to Hell. It feels incredibly floaty and just plain weird.
For example, if you’re on a ledge, the game will stop you in your tracks, with a little “whoa!” arm flailing animation. This is fine on high ledges. This also happens, however, when you’re trying to get off a two-foot brick. I got stuck in the animation several times, trying to jump off a stone block and not being able to.
Another time, I was trying to climb from one ledge to the other by hugging the wall. I pressed forward to come closer to the wall, the boy slammed into it, lost his balance, and fell to his miserable death. 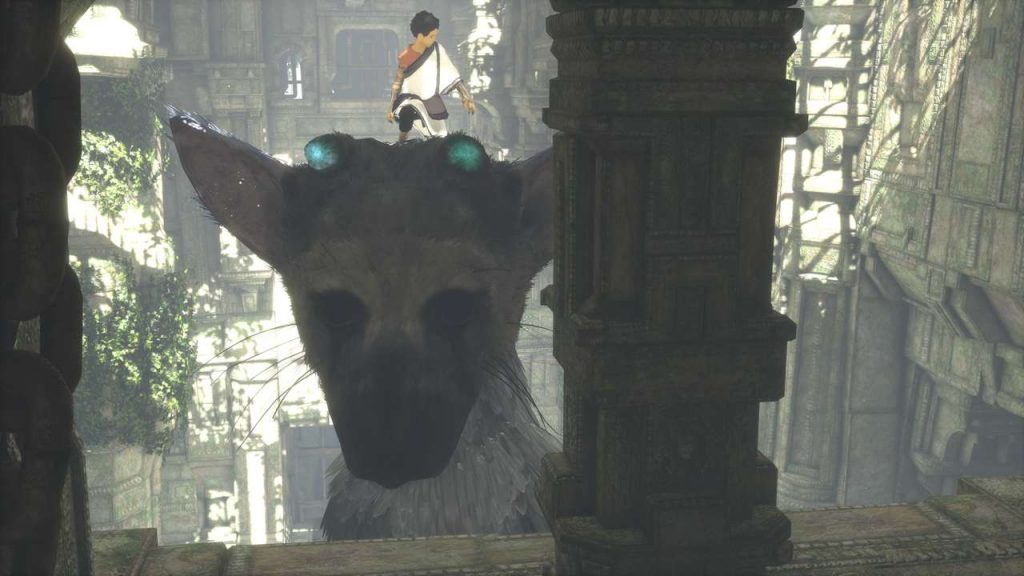 But nothing, NOTHING in this game is a bigger enemy than the camera. It’s somehow even worse than in Shadow of the Colossus. It’s perfectly serviceable in the open, but in tight spots, good grief. It will get stuck in the most fascinating of positions. It’ll try to show me both the boy and Trico simultaneously, but it just ends up showing me Trico’s rump.
Other times, it’ll want to be cinematic and zoom far out while I’m trying to navigate a narrow walkway, and just tag-team me with the controls.
But my favorite part came when I tried to jump across a chasm. The camera rotated mid-jump for no reason, my forward became left, I slammed into the wall and careened gaily to my doom. Honestly, this camera never should have made it out of beta. All the immersion just dissipates when the game comes to a screeching halt because I need to fine-tune a jump for five whole minutes. Yes, I clocked it.

So, at the end of this long, rambling review, what’s my final verdict? I say, you really need to try this game out at least once. The experience it offers is absolutely one-of-a-kind, and it’s worth all the frustrations in the end. Arm yourself with a lot of patience, because the game’s slow pace and atmospheric nature are its strongest assets. This game might be seriously flawed, but the good outweighs the bad.

Note: If you are a fan of Team Ico games, you should consider this game to have a score of 8. For the majority of gamers, however, we scored it the way we did.

NEXT POSTPokemon GO How to Get Raichu With Christmas Hat