Workbenches are used to upgrade weapons in The Last of Us II. Since weapons are how you communicate with your surroundings, these places offer you the much needed chance to finely tune your tools and make them the best you can. There’s no shortage of them, as almost every sub-chapter in the game has at least one. Still, most of them are easy to overlook in the heat of the moment, especially if you’re not actively looking for stuff. Finding them all will unlock the Prepared for The Worst trophy, and if that’s something you’d like, then keep reading this guide – it’ll show you all The Last of Us 2 workbench locations. This article is here to give you helpful tips if you are stumped. If you are looking for a visual guide then watch this video or scroll to the end of the article. 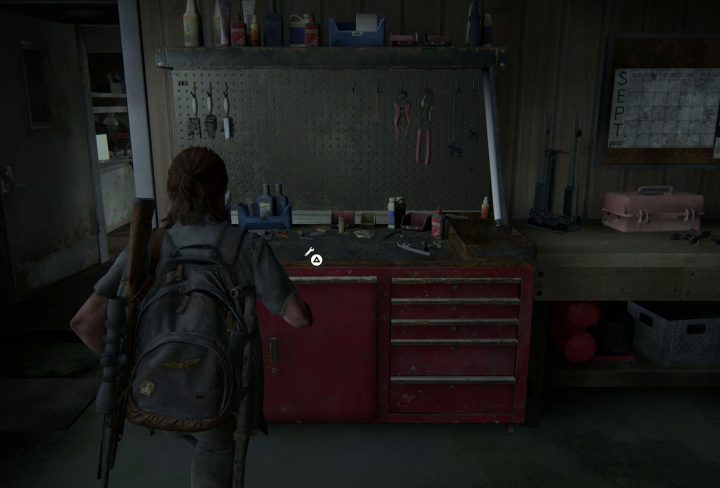 1. This one’s practically impossible to miss. As soon as you start the generator, turn around and you’ll be allowed to use the workbench you passed on your way to it.

2. It’s strange that there’s only one in such a big chapter, but what can you do? On the corner of Marion street and 5th avenue, there’s a checkpoint. Go up the stairs and squeeze through the gate. Enter the tent and look to the right – you’ll find the bench.

3. Starting from the big warehouse with the 24 hour access at the gate, head to the left, then make a right turn. Go past Nancy’s Gift Shop and turn left. Keep walking until you see a gas station on the left. There’s a garage attached to it – go inside and you’ll find the workbench.
4. There’s another one after you pass through the overgrown valley. As soon as you’re back in the city, you’ll see a martial arts center. It is the area with all the trip wires. Go inside, and head into the hallway past the training room. Follow it and you’ll end up in a tiny workshop, which is where the workbench is.

5. At one point, you’ll go inside a room with a bright red light. In this room, you need to climb up a ladder. Turn right at the top, and go inside the next room to find a workbench.

6. Go into the clothing store – it’s the second building on the right – and head to the back. Look for a hole in the wall, which will allow you to reach the basement. You’ll see the workbench from the stairs.
7. The second one is in the area after you go through the red door and block it. Look for a locked garage door. You’ll find a container nearby – push it to the garage, up the incline on the side. When you let it go, it’ll start rolling back, so you’ll have to quickly climb it and hop onto the roof. You’ll find the bench once you go through the hole in the wall.

8. After you pass the south 5 road sign, go under the overpass then turn left. Climb onto the grey truck and head into the apartment. Go through the white door on the left, then forward until you’re in the big room. The workbench will be on the right.
9. In Weston’s Pharmacy, after you went for a swim. Go up the stairs and into the shop, then look for a hole in the wall after the counter. Go inside and head right to reach the bench.

10. You’ll come across the first workbench locaiton in Road to the Aquarium when you go into the building with the big blue WLP sign above the door. You have to go in there because the tunnel is blocked. Once in the hallway in the back of the store, look for the open door on the right blocked by debris. Crawl inside and look to the left to find the workbench (and a trading card on the opposite side).
11. The second workbench comes much later, when you get into the building full of mannequins, after the swimming section. Walk up the dirt path on the left, climb into the building, and turn to the left. Go through the large hole in the wall between two mannequins, and the workbench will be in that room.

12. When you reach the first locked boat gate you have to pull the chain to open, go into the garage on the right, with the blue paint around the entrance. The workbench will be inside.
13. As you enter the arcade and reach the boat gate, disembark and go up the stairs. You’ll find the bench in the corner near the balcony.

14. From the top of the boathouse, go down the hole in the ceiling using the rope. In the next room is a big boat suspended from the ceiling. You’ll spot blueish stairs on your right as you enter that area. Across from them is where you can upgrade your weapons.

15. The only workbench in Seattle Day 1 part 2, Forward Base chapter comes right after the check-in point. Go into the first tent on the left, and you’ll find the workbench in the corner.

16. Almost at the end of the chapter, you’ll slide down and crawl under a small passage and then move one metal case to the right. In the next area, head to your left, and you’ll soon be inside a room in the Scar camp with a workbench inside.

17. In La Rosa’s Auto Shop, against one of the walls. Practically impossible to miss, unless you’re really in a hurry.

18. Found inside the container in the big WPL building, after you jump over the fence under the yellow crane.

The Shortcut workbench locations – The Last of Us 2

19. In the Interbay building, to the left of the entrance. It’s a service area, and might fool you with its looks, but it’s there.

20. In the storage room after the altar with the wooden figurine. Can’t miss it, really.

22. As you go uphill, you’ll pass by a wooden tower you can climb up. After this part, you’ll come across two houses, on the right and left. Inside the left one is a workbench.

23. After you climb up the yellow ladders, you’ll find yourself on a platform with a satellite dish. From here, you can go through a small window towards the room with a workbench inside.

24. In the big mansion near the white truck smothered in ivy. Go through the hole in the wall, around to the car in front of the garage. Climb up to the roof and go in through a window. Drop down onto the ground floor, and turn around. Go into the kitchen and you’ll see the workbench location behind the counter.

NEXT POSTThe Last of Us 2: How to Cycle & Change Weapons Guide