Finally, Episode 2 of the The Walking Dead Season Two is out! Episode 1 left Clementine in not so desirable place, having to make a tough choices that will certainly leave a mark on the whole season. A House Divided will show that but it will also answer some important questions from the previous game. So let’s check it out and continue where we left from!

Due to the nature of the game and how this guide is created, please have in mind that this page contains some spoilers from all published The Walking Dead episodes up to this date, which could greatly ruin your experience. Spoilers will be avoided as much as possible, but important decisions will be covered, potentially revealing some key plot elements. Continue at your own risk.

Chapter 1: Two of Us 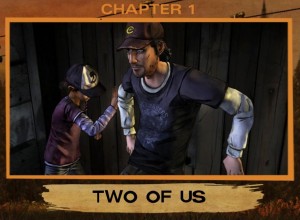 At the beginning of this episode, Clem and Nick are stuck inside of a shack. There will be small quick time event, so follow instructions on screen. They will talk, so answer those questions as you think it’s best – it won’t impact the story. When you gain control over Clementine go to the left. Move the plywood in the top left corner, to reveal jars of moonshine.

Later in the day, Nick will start smashing jars, go over there and talk some sense into him. During conversation he will start giving up and ask Clementine to continue alone. Here you can ask him to come with her or not, it’s your choice.

If you convince him to go, soon after they go out, they will be surrounded by Zeds. Nick being drunk, isn’t much of the help so here there will be a choice for Clem: should she run or try and help Nick. Either way, Clem will continue alone and soon there will be another set of QTE commands to follow. If you get them right and on time, you are in the clear. 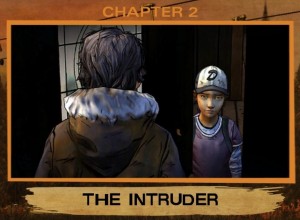 Now that Clem has returned to the house, she can explain what happened to the Nick and Pete. Woman and the doctor will immediately storm outside to find others. Before leaving, doctor will ask Clem to take care of Sarah, your reply will be remembered.

When she comes to Sarah, she will take picture of Clem and then ask Clementine to take photo of her. It’s pretty straightforward, so just do that.

Sarah will ask Clem about here father and to teach her to use the gun, again choose your responses. Someone has returned and you will have to go downstairs. You can check the windows, but Clem won’t see anyone. When you come near door, you will see a new person at the front door. You will have an option to lock or open the door but either way he will come inside and there will be long conversation between Clem and him.

He will ask many questions, but you will have to be careful with responses, because he will remember what Clem says. Just stick to one story and nothing bad will happen. 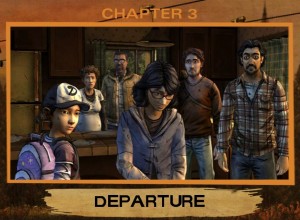 The unknown man leaves the place and soon after the group will return. Clem and Sarah will tell them about stranger coming to the house.

It looks like that’s William Carver! He is a dangerous man, so they don’t take very lightly the fact that he saw Sarah’s photo. This is where there will be first important decision in this episode. You can choose to [Take The Blame for the Photo] or [Refuse to Take the Blame].

The group decides to leave, but Luke asks Clem to lead them to the place where we left Nick. It won’t be long after they reach the stone shed and to Clem’s pleasant surprise, Nick is still alive!

This chapter is all about conversing, Nick will mention if you previously tried to help him and he will memorize your resonses. Clem will talk to the woman and to the Luke too, but chosen options won’t impact the story.

Chapter 4: In the Woods 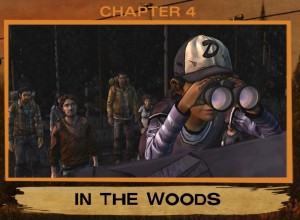 After the long walk, the grouped decides to stop for a second. Clem will climb the rock and take a look with her binoculars. You should spot the bridge and the small house next it on the left, and the chair lifts and ski lodge on the right hand side.

Luke will suggest that Clem and him go and scout ahead, but Carlos will disagree. There will be a short discussion here.

Walking to the bridge, Luke will ask Clementine a question: What’s most important in this world? The correct answer is family.

After that there will be short action scene when the two decide to take out zombies. Use the hammer on the zombie, but it will get stuck so drag it to the left, and then to the right to pull it out. 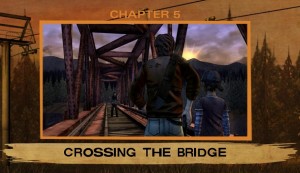 Clementine and Luke will continue walking to the other side, but there are more Zombies here. This will be an action scene, just follow instructions on the screen.

At first, Clem has a chance to help Luke, but whatever you do, she won’t be able to. She will get attacked by zeds instead, first you have to mash buttons and then press next one, but after that you pay close attention to directional commands. After you will have to choose between Luke’s machete and rusty pipe, either one works. We used pipe and aimed for the head it worked perfectly. Other choices just ask from you to press some additional buttons. After that’s done, give pipe to Luke and help him stand up and climbe out.

Clem and Luke are not in the clear yet, there is someone on the other side of the bridge. There will be a short dialogue scene here, but whatever you decide to pick as a response it won’t impact the story in any way. Sadly.

Chapter 6: The Other Side 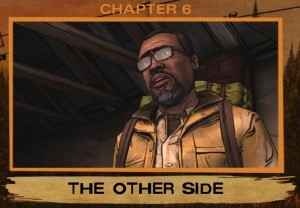 That was a mess, right? The group will argue about what happened, again pick the sade you want or remain neutral, it’s up to you. When Luke and Carlos go to talk in priver, you will have control over Clementine.

It’s back to adventuring. She can talk to Alvin on the left, but you don’t have to. You should talk to Nick. If you grabbed the watch in Episode 1, when you are searching the cabin for medical supplies (chapter 8), give it to Nick now. That’ll put smile back on his face.

You can enter the station without checking it out. Inside she will find a lot of empty cans and the radio on the left hand side, but it’s unusable, too. Intead, grab the knife on the shelf on the right and then check the trunk slightly in front of it, also on the right side. Open it with the knife.

Alvin will enter the building and ask Clem to give one can to Rebecca and keep it quiet. It’s up to you how will you respond here. 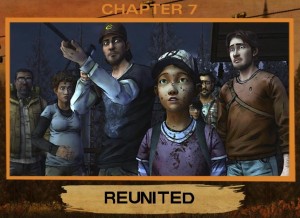 The group will walk towards ski lodge, and they will stop in front of it. Luke will turn to Clementine and ask her to climb the ladder and check the surrounding. She will do it and you will again control Clem, climb up and respond to Luke when prompted. However there isn’t much to do wrong here.

When you are the top, look at the bridge first. Then two lights will show up near it, check them out and report it to Luke. After that something happens in front of the Ski Lodge, so you will have to go down. They met a new group of people but there will be someone familiar there. You will be offered the choice how to respond to this surprise. 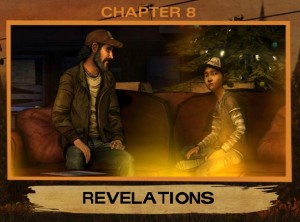 When everyone is inside, there will be a tense situation when new group ask Carlos and the rest to disarm. Clem will be given a chance to calm them down, it’s up to you how you handle it.

Clem will talk to Kenny, they will talk catch up and go over what happened since they last saw each other. You can choose whatever answer you feel is appropriate. The same applies when Clem talks to the new group’s cook, Walt. After Clem finish chatting with him, you will get the chance to explore the lodge.

Check everything if you want, but it’s important to go to Sarah and Sarita and talk with Sarita. They will ask Clem to find topper for the tree. It can be found upstairs, using stairwell behind the Christmas tree.Talk to Rebecca, but be careful she will remember your responses. Next to her and Alvine there is a box, look inside to find three toppers. Sarah will remember your choice. After doing that Sarita will again want to talk to Clementine, she wants to know more about Kenny and she too will remember your answers. It’s time for dinner. 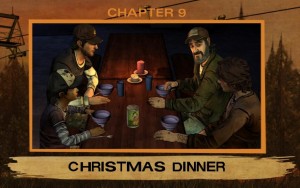 The dinner will be your second major decision in the game. Both groups are sitting at different tables and you will have to choose if Clem will [Sit With Kenny] or [Sit With Luke]. Kenny will remember this decision.

If you go with Kenny, they will ask about Nick, if you go with Luke they will talk about Kenny. Responses won’t impact the story much, but soon Kenny or Luck and Nick will sit down at Clem’s table. They mention Wellington, place Christa talked about. Soon there will be another argument and Clem has to calm them down. 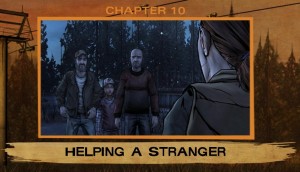 Clem and Walt will go outside and talk. Don’t worry about your answers as none of them won’t impact the story. Soon Kenny will join them and they will spot Bonnie (if you played 400 Days DLC you already know who that is).

The choice whether to trust her or not will be remembered. This encounter won’t end up badly, and Clementine will go inside. Luke will demand to talk to her. The conversation will bring another semi-important decision. 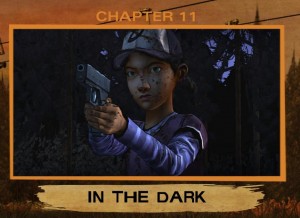 This episode’s finale is starting here. Walt and Clementine will talk about his partner Matthew. Third major decision in this episode is whether [Tell Walter the Truth] or [Lie Walter]. Immediately after that, Nick will come outside. Walt will ask Clementine about Nick and this will be your 4th Major Decision: [Tell Walt Nick is a good man] or [Tell Walt that Nick is like everybody Else]

Soon after this scene is finished, another problem is at hand: wind turbine is out of control. Noise will attract zombies, so Clem has to turn it off. First lit your lighter, then grab the key on the right and after that use it on the red switch in the down-left corner. It’s too late.

The action scene is gonna start here as wind turbine brought zombies to the lodge. Follow instructions and act quickly. Don’t worry about if Clem misses, it’s not your fault. You will have to smash your button to get the shotgun and then aim for the head of the zombie.Clem will be on the ground, but don’t try to pick up the shotgun again, take knife to the left, stab the monster. Nick is attacked by the undead monsters. Based on what happened previously and your decisions, you either convinced Walt to forgive Nick or not. Walt will either help Nick or let him die here. 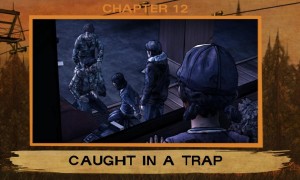 Things aren’t getting easier from this point. Carver shows up, and take almost everyone from the group as hostages. The game will again pop up those commands that you need to follow, so be ready. When you have the chance to peek over the chair, don’t take too long and you will be fine. Still nothing too hard.

When you reach Alvin and Rebecca, there will be fifth and the last major decision in this episode: [Reveal Rebecca to Carver] or [Sneak off to find Luke and Kenny].

There is actually two ways the game will continue on here, but the ending of the episode is exactly the same.And that’s it for this episode!