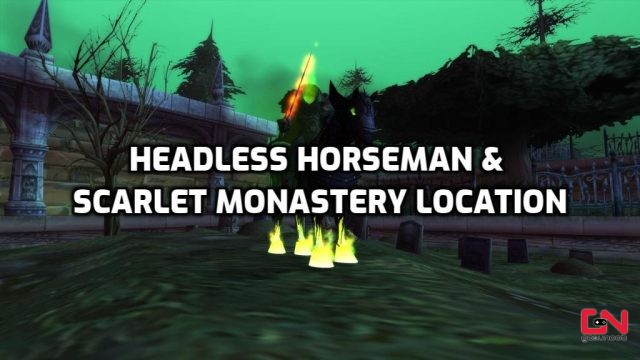 The Headless Horseman Quest Guide WotLK Classic, How to Get to Scarlet Monastery

Where to Find WotLK Headless Horseman

So, how to get to the WotLK Headless Horseman location in WotLK Classic? The Headless Horseman is a special event boss, and he can be found in the Scarlet Monastery. More specifically, he can be summoned from the Scarlet Monastery graveyard. If you don’t know how to get there, read on. If you play as a Horde member, head to Dalaran and take the portal to Undercity. Once there, just follow the path northeast out of the Undercity in Tirisfal Glades and you’ll eventually reach the Scarlet monastery.

If you are an Alliance player, the path is a tad bit more difficult. Head to Southshore, sprint north past Tarren Mill, and follow the road leading to the Western Plaguelands. From there, follow the road toward the west. Make sure to avoid the Ruins of Andorhal and just head alongside the mountains to the west until you reach Tirisfal Glades. Now head north and you’ll soon encounter the Scarlet monastery.

So there you have it, now you know how to find the WotLK Headless Horseman and reach the Scarlet monastery. Once there, simply find his pumpkin shrine and summon him. You will be able to summon him once per day per character. However, you can fight him multiple times per day with the same character when other players in your group summon him.

NEXT POSTFFXIV Wow Emote, How to get FF14 New Emote