The Eighth Heroine is a sidequest that you can do in Zelda: Breath of the Wild. You pick it up in Gerudo Town by talking to one of the NPCs there. It will require a trek into the mountains, so be prepared. You’ll receive the Snow Boots for completing the quest. In this guide, we’ll show you how to complete Zelda Breath of the Wild Eighth Heroine side quest.

How to Start Eighth Heroine Side Quest 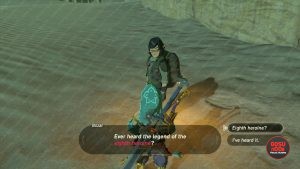 Your first step should be to go to Gerudo Town and locate a person running around. You’re most likely to meet them during the day. Their name is Bozai, and they’ll tell you all about the seven heroine statues and the rumored existence of the eighth one. Don’t forget to wear your Gerudo Vai outfit. You’ll need it both to enter Gerudo Town and when you speak to Bozai. After the conversation, you’ll start the Eighth Heroine sidequest. Bozai will tell you where you need to go and what to do and give you the Snow Boots (you’ll have to return them afterward, though).

Where to find Eighth Heroine Statue

You need to go into the mountains to the north, called Gerudo Highlands. If you take a closer look at that region, you’ll notice a gap in the north between the central peak (Gerudo Summit) and the west mountain (Mount Agaat). That’s where the Statue of the Eighth Heroine is. The exact spot is the small, kinda-triangular area south of Hemaar’s Descent and northeast of Gerudo Summit.

Once you’ve done what you came here for, head back to Gerudo Town to hand the quest in to Bozai. You’ll have to return the Snow Boots now, but you’ll get the Sand Boots, which help you move faster in the sand.

There’s one more quest that you can do for Bozai. Go to his tent and talk to him. Ask for the snow boots, and he’ll tell you how the Eight Heroine statue wasn’t holding her sword. If you bring him proof that the sword exists, you’ll get the snow boots. According to him, it’s probably somewhere back in Gerudo Highlands. This time, though, he won’t let you borrow the snow boots.

Prepare for a long trek north. The Forgotten Sword lies in the south of the Gerudo Summit area, all the way at the top of the mountain. There are no special puzzles to do, you just have to patiently climb there. If you’ve discovered a shrine nearby, such as Keeha Yoog, just teleport there and continue your journey.

Once you climb to the top and find the Forgotten Sword, all you have to do is snap a picture of the statue and go back to show it to Bozai. However, if you kill the moblin at the base of the sword, you can take the Golden Claymore that’s sticking out of the ground. Be mindful of a very strong Lynel hanging around the area, though.

After you’ve taken the picture of the sword, head back to Bozai and collect you snow boots.