Gulliver is one of the inhabitants of your island in Animal Crossing New Horizons. He’s a sailor seagull, and you’ll find him dozing off on the beach. After you’ve awoken him from his slumber, he’ll tell you all about his predicament and ask for help. He needs five communicator parts in order to fix his phone and let his crewmates know where he is. He’ll ask you to get the parts for him, with little information on where to look. If you’re having trouble getting them, this guide will show you where to find communicator parts for Gulliver in Animal Crossing New Horizons.

How to wake up Gulliver?

When we first encountered Gulliver, he was fast asleep. There was no way to wake him up, as far as we know. However, we had more luck when we returned the next day. So if he’s sleeping when you first find him, try giving him a day. Some people just need unreasonable amounts of time to get out of bed.

Gulliver will tell you that the parts are probably buried in the sand somewhere, and guess what: they are! Just take out your shovel and start digging holes in the beach near him, and soon enough you’ll have all five communicator parts. 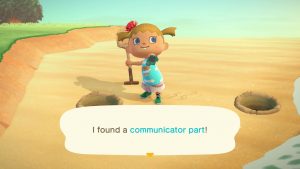 If you don’t have a shovel yet, you’ll have to play some more before completing Gulliver’s request. You’ll get the recipe for crafting a flimsy shovel from Blathers the owl, who only appears after Tom Nook stops accepting creatures from you. This means that if you don’t have a shovel yet, there’s a whole lot of fishing and bug hunting between you and having one. Once you have the recipe, you’ll need five pieces of hardwood to craft the tool.

PREVIOUS POSTDoomicorn – How to Get & Claim Character Skin in Doom Eternal

NEXT POSTHow to Get Shovel, Dig Up Trees & Get Nuggets in Animal Crossing New Horizons