Hidden Depths is one of the missions in Anthem. In it, you’ll have to help Matthias the arcanist by going into the wild and looking for the fabled Elysian Manuscript. The missions is pretty straightforward – go to a certain place, kill a bunch of enemies, go to another place, kill a big bad Titan – but there are a couple of puzzles that could prove to be difficult. They involve matching pictures on rotating pillars to pictures found around the cave. This guide will help you complete the Anthem Hidden Depths mission, by showing you the rotating pillar puzzle solutions.

The first task you’ll have after you’ve reached the alleged location of the tower will be to collect six arcanist runes. A radar at the top of your screen, below the compass, will tell you which way to go. They’re blue glowing sigils written on various surfaces – when you see one, you’ll recognize it immediately. You’ll have to repeat this several times, then fend off waves of enemies while you guard an arcanist marker.

After you’ve defeated the skorpions inside the chamber, you’ll face your first rotating pillar puzzle. The images on the pillar will have to match the symbols found around the room. As you’re standing on the platform with the pillars, you’ll find the right symbol at eye level, on the cave wall directly in front of you. The left one will be near the ground, a little to the left. 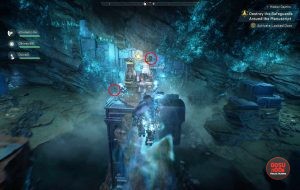 Afterwards, you’ll have to continue deeper into the cave. After you defeat the Titan, you’ll have to complete another rotating pillar puzzle in order to get to the manuscript. This time around, there will be four pillars. On the left side, the first symbol is on a nearby stone column on the left, while the second is on a stone column in the distance. On the right side, you’ll find the first symbol directly behind the pillars, while the second will be on a column to the right.

Once you complete the second puzzle, you’ll just have to grab the manuscript from its resting place and bring it back to Matthias.