World bosses are special enemies in Anthem. They’re meant to be taken on with a team, as the challenge is supposed to be far too great for any one person. You’ll find them roaming specific areas of the map, but they aren’t always present – they appear at random times. This guide will show you a list of Anthem world boss locations.

Where to find ancient ash titan?

The ancient ash titan is just an extremely big titan. We’ve found one on the river, near the border between Great Canyon Falls and Emerald Abyss. We encountered it there several times, so we’re pretty sure that would be a guaranteed spot, if it weren’t for the scheduling. The titan won’t be there at all times. It appears at random, and it can take a while for another to come after you’ve defeated one. 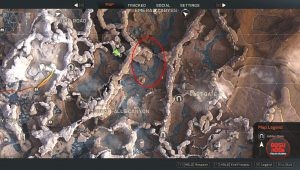 The boss isn’t tied to any world events, and you’re supposed to attack it in a squad. However, it’s a pretty terrible boss, and you can easily solo it if you’re patient enough. You can hide behind the rock formations when it fires the laser, as that is the only attack you’ll have to worry about. The minions it summons are easy to deal with, the grenades it lobs and the area of effect ball of lightning are easy to dodge, and the fiery ripples are obviously telegraphed.

You’ll won’t do much damage by yourself, but if you’re smart about avoiding his attacks and persistent, you can easily defeat the monster without any help. We’ve only soloed it once, and it disappeared when it was at one health bar, leaving behind one uncommon and one rare item. It seems like you have to be quick about it as well – either that or it was a bug.