By the Fates is one of the quests in Assassin’s Creed Odyssey. The final step involves trying to figure out which of the two identical twins is the real Diona. The choice becomes more substantial when you realize an innocent person might die by your hand, and cause Kythera to fall with her. In this guide, we’ll show you how to complete AC Odyssey By The Fates quest, which one is the real Diona, a Worshipper of the Bloodline cultist.

Which Diona to kill in AC Odyssey?

By the Fates is a world quest that comes at the end of a chain starting with I, Diona. This quest is found at the south of Kythera Island, in the Skendeia Bay region. Diona, the priestess of Aphrodite, is being attacked by some thugs, and you’ll need to defend her. Once you save her, you’ll progress through new adventures to reveal the Undiscovered Sage from the Worshippers of the Bloodline branch, earning a piece of the Immortal legendary armor set. These new quests are: All Boonds Will Break, Pick Your Poison, The Handmaiden’s Story and In a Rush. Throughout these quests, you’ll get clues on the real Diona. At the end of the final quest, By the Fates, you’ll end up meeting both twins at the altar. This is where the final clue is revealed. If you look closely, you’ll see that Diona is choking her sister at the start of the final cut scene.

You’ll then get to choose which one of the sisters you should attack. There’s a timer pressuring you to make your choice, and you’ll have to do it fast. Diona, who is a part of the cult, is the one on the right. This means the correct option is the first one: On the right – you’re Diona!. The right Diona is the real Diona. Catchy. 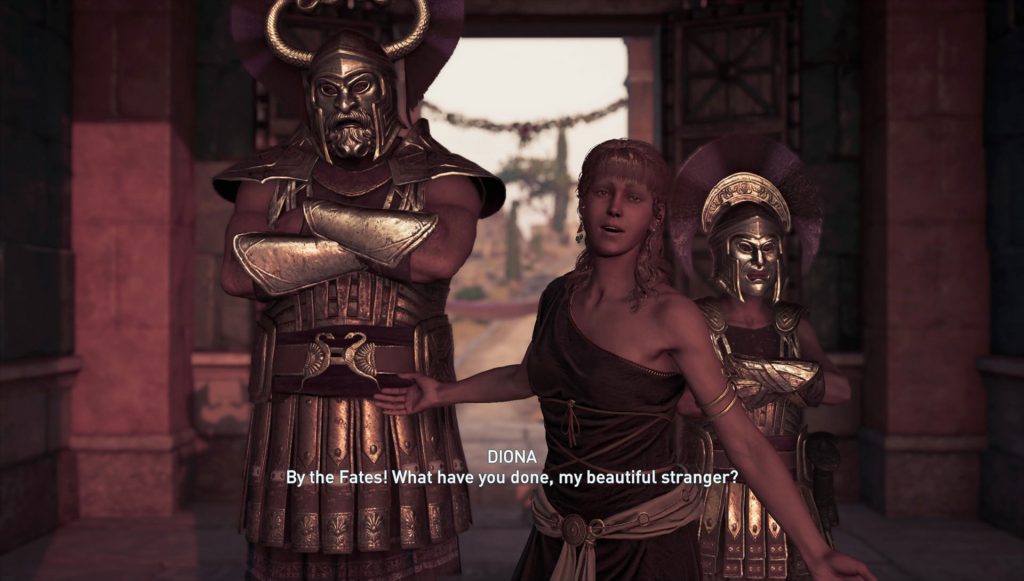 If you choose the correct answer, you’ll only have to fight Diona. If you choose wrong, the real cultist will attack you with a couple of friends. They don’t pose that much of a threat, but the fact that you’ve killed the innocent sister will haunt you forever.

Remember, if you’re not satisfied with the answers and the final outcome of Diona’s story, you can always load the oldest auto save. If you were lazy like we, you’ve probably used the fast travel point near the altar just before the cutscene, which is where the auto save kicks in.