Assassin’s Creed made quite a comback with the Egypt-set Origins, after several years of lacking, mediocre installments. While many people thought Ubisoft was going to take another gap year this time, the diligent developers surprised everyone by announcing AC Odyssey for this fall. It’s set in ancient Greece, some four hundred years before the last game. I had the chance to try it out during this year’s Gamescom, and here’s how I felt about it.

It’s very similar to Origins – the setting, the time period, the structure – but with several crucial differences. The combat system has been re-done, they’re bringing ships back, they’ve added the mercenary bounty system. It also leans much more heavily into fantasy. All of this was present in the demo to some degree.

The demo started off in a small port, with a single map marker pointing towards the top of a cliff. When I got there, I discovered an argument between a local woman and a group of armed guards. She wanted help to find her lost lover, while the guards, lead by a scrawny, aggressive man wanted to burn her at the stake. The dev team member who lead me through the whole thing mentioned it was an end-game mission – my character was fully decked out with golden-quality equipment and weapons, and a bunch of abilities already unlocked.

Of course, offering to help the woman ended in a scuffle with the guards, so the first difference I got to experience was the combat system. You can’t use a shield anymore, so your only defensive options are dodging and parrying. The latter requires quite a bit of skill – knowing the timings of different attacks, as well as being proficient in reading the visual cues enemies use to telegraph them. I kept to dodging (badly, at that).

It’s much more aggressive, the game encouraging you to jump into the fray and keep fighting until there’s nobody left standing. There is a bunch of active abilities, similar to Origins’ overpower attack, which use up your rage bars. You fill up the rage bars by defeating enemies, so it’s a vicious cycle. And the abilities themselves are pretty crucial. One of them allowed me to slam the ground and send enemies flying while dealing massive damage. Another let me heal myself mid-battle, while yet another made my sword flame up and do additional damage. There’s no place for reserved play styles here – you have to jump in with both feet. 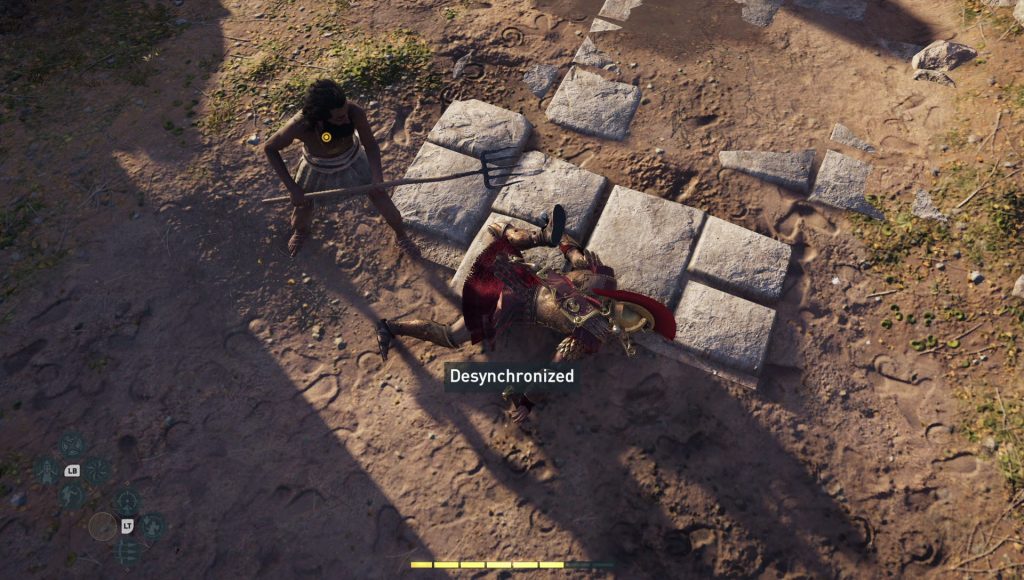 It took a few tries to defeat the bunch, and after I did, I was greeted by a red meter in the lower right corner, showing my current bounty level. It meant mercenaries would start looking for me. Soon enough, I ran into the first one. She wielded a bow with poison arrows, and was quite handy with it. After running around for a while, trying to dodge her attacks and dish out some of my own, I ran into another mercenary – a fairly large fellow with a giant hammer and a hunting dog. I decided to back down gracefully and ran into the nearby wheat field to hide.

The mercenaries are no joke. They’re a decent challenge, even at higher levels. You can fight them if you want the extra challenge, but you can also opt-out of the whole chase if you pay the bounty yourself. I had to use the option to get them off my back, since my time with the game was limited, but I could’ve happily spent an hour trying to evade the pair, separate them and deal with each on their own. As I presumed, they turned out to be a mix between Origins’ Phylakes and GTA’s police.

After some escorting and a couple of scenes of dialogue (still being recorded in the same, cringe-worthy English with a thick local accent), I had to board my ship and go to a different island. If you were expecting Black Flag 2.0, you’ll probably be a bit disappointed. It’s much less involved than that, but it’s still a fun diversion (and also your main mode of transportation, at least until you start fast traveling anywhere you like). There’s no ammo this time – your ship’s weapons work on a cooldown, so you won’t have to worry about the supply of arrows and javelins. You’ll also have lieutenants this time, special crew members whose stats affect your ship and its peformance. 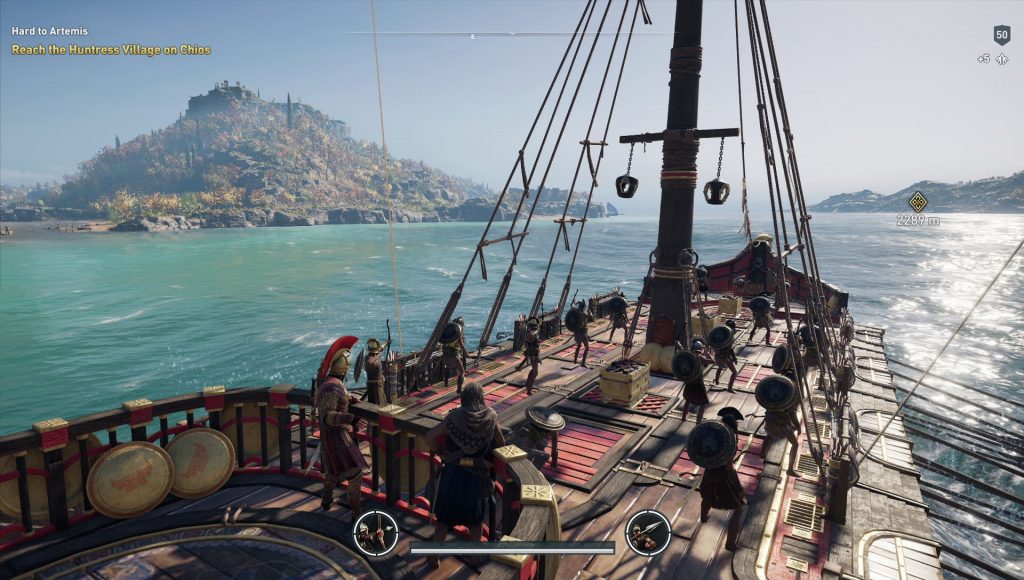 The quest involves looking for a key that will allow you to enter the ruins where you suspect the missing woman is. It’s a bit long, requiring more time than what we had at Gamescom, so I was transported directly to the end of the line, where I had to fight a boss. The boss fights in Origins were mostly a chore for me – they took far too long to finish, and there didn’t seem to be any skill involved. Compared to them, this was a treat.

The boss was a Medusa, part snake, part woman, armed with a petrifying gaze. She summoned a trio of stone golems into the arena once the battle started. I was forced to juggle repelling the three of them with hiding behind stone pillars so that the boss doesn’t turn me to stone. Defeating all three lowered her magical shield, allowing me to do some damage before she summoned more. It was hardly a Dark Souls boss fight, but it was much more involved than those in the first game.

The jury’s still out on this one. What little I did play was fun – the recognizable brand of AC fun, where you skip all the dialogues and run around climbing stuff and looking for incrementally better gear while murdering peasants, guards, livestock and anything else in your way. There’s definitely a bunch of new stuff there, but it’s still Assassin’s Creed. Whether you like it or not will depend solely on how much you’re hankering for another one of its kind, I suspect.

PREVIOUS POSTSoulcalibur VI on Nintendo Switch Currently Not in the Works

NEXT POSTCyberpunk 2077 3rd Person & Coop Multiplayer – Will it Happen?