Assassin’s Creed Origins special editions & pre-order bonuses have been revealed at E3. This list gives you insight into what you can expect to get for your money once the game goes live on October 27, 2017. All editions have the game, while some of them offer special missions, the season pass, a new map and more. The prices of the special versions are something the avid players are familiar with already, and there are no surprises there. 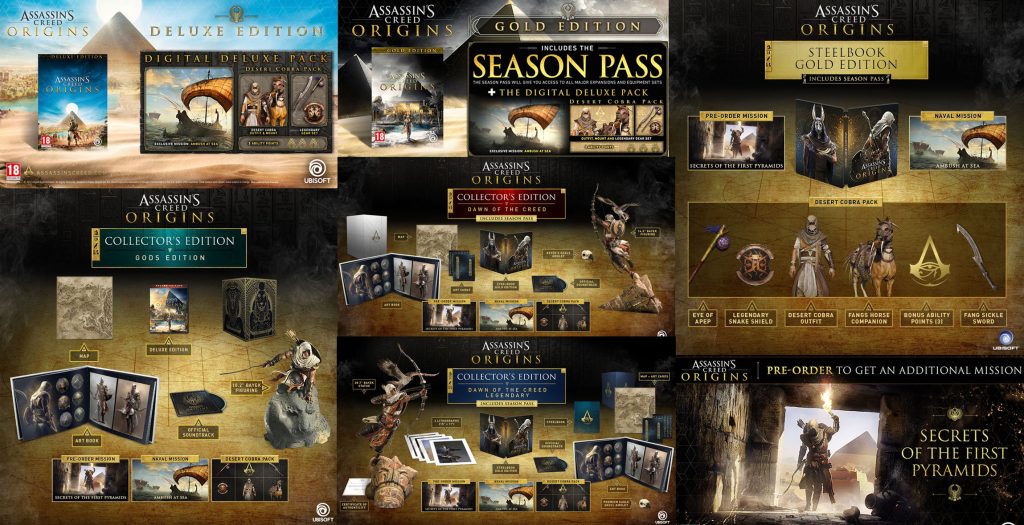 If you pre-order Assassins Creed Origins, you’ll get an additional mission, called Secrets of the First Pyramids. Just like the names implies, this mission allows you to discover the secrets behind the construction of the first pyramids. It will also reveal the mysteries that lie within.

This bonus will be available in all editions. To make sure you’ll get it, you just need to buy the game before its launch.

This is the $60 version. On top of the full game and the pre-order bonus, you can’t expect anything more. If you’ve bought some of Ubisoft’s games through their store, you can get a 20% discount for 100 club points, making it a total of $48. Just to make it clear, standard editions like this one can earn you up to 60 club points.

This is a step above the standard edition. The price is a bit higher – $70. Once more, you can make it $56 with a 20% discount on the official Ubisoft store. Some of the features that the deluxe edition offers are:

If you buy it in a brick-and-mortar store (Xbox and PS4 only), your copy will also have a map of the in-game world and the game’s official soundtrack.

This is the $90 version. With a 20% discount from the Ubisoft store, you can lower it down to $72. It has all the features found in the deluxe edition, plus the season pass, which gives you access to all upcoming major expansions and equipment sets. Is it worth this much money? It is up to you to decide.

This one will feature all the content available now and in the future. It doesn’t have a discount price, and you’ll need to give up to $110 of your hard-earned money. As you might have guessed, it has all the content that the gold edition offers, plus a collectible steelbook case.

The gods edition costs $120, and has all the content the deluxe edition contains. That’s it. It doesn’t include the season pass. Besides all the content that the physical deluxe offers, with this one, you’ll also get an art book and a 10.2″ Bayek figurine standing on the statue of Sekhmet, the lioness goddess. Everything here is packaged in a premium Egyptian gods themed collectible box.

This $160 edition is found exclusively on Uplay. This is an upgraded gold edition. It has the season pass, 14.5″ Bayek figurine, Bayek’s eagle amulet, steelbook gold edition of the game, two art cards, world map and official soundtrack, all packed in a white collectible box. The difference in price between this and the next one is a bit, well, steep.

This is the most expensive version. It is in every way a legendary collector’s edition, as it will be limited to only 999 units, 200 of which will go to North America. It has all the items included in the $160 version (minus the figurine), plus new stuff like: an 18.7″ Bayek statue, a certificate of authenticity, 4 lithographs (15″x11″). All these items are packed in a blue premium collector’s case. The price is a measly $800.

The prices below are the base ones. Some of them can be lowered with discounts. Check the Ubisoft store or your retailer for more info.

Assassin’s Creed Origins was officially announced at Microsoft’s E3 conference. Some of the details are already known, for example the skill tree.