The best weapons in Assassin’s Creed Origins are the ones that suit your play style. If you prefer heavy weapons, that are slow to swing but pack a punch, you’ll probably want an axe. If you value being able to slash quickly, you’ll go with dual blades. That being said, some weapons definitely have advantages over others. Cursed weapons are one of those – they reward your agility with increased damage. You’ll be able to kill enemies much faster, but you’ll be more exposed yourself. Since they’re pretty hard to come by, we’ve decided to write this guide to show you how to get cursed weapons in AC Origins.

If you’re not familiar with them, cursed weapons increase your damage but reduce your health. Each one has doubled damage compared to a basic variant, but it also lowers your max health to one third of its current value. In other words, you’ll be a glass cannon. Do not get hit.

This sickle sword is a quest reward. You can obtain it by finishing the Forging Siwa side quest. You can start this levle 25 mission in Euhemeria, the city in the south of Faiyum. Go to the market west of the fast travel point, and walk around. You’ll either get the quest by overhearing a conversation, or by talking to a green-robed man walking around the market. You’ll have to find a certain stall in the Valley Market, talk to a young peddler and help her mother deal with bandits. She’ll reward you with the sword in question. 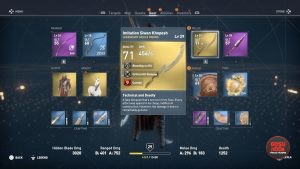 Apart from being cursed, it also has a decent chance of causing bleeding, which inflicts damage over time. It also an above average critical hit damage. It can be upgraded at the blacksmith, so if you like its move set and speed, you can keep using it practically forever.

This spear is obtained by defeating one of the Phylake bounty hunters. Unlike most loot that drops from enemies, Phylake drops are scripted, so you’ll get it no matter what. The assassin in question is The Stranger, a level 28 opponent roaming the streets of Memphis. He’s armed with a sickle sword and shield, and the easiest way to kill him is to simply run past him on your mount over and over again, hitting him once each time. He can’t really deal with this, so it’s an easy win. 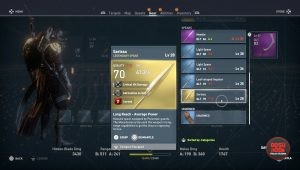 PREVIOUS POSTShadow of the Colossus Not a Port, or Remaster