Tombs are special dungeons in Assassin’s Creed Origins. They’re mostly hidden inside pyramids, and completing the challenges within will grant you an ability point. Most of them are easy to spot from a distance, but some are actually well hidden. Completing the challenges presented inside can also be a bother sometimes. That’s why we’ve decided to list all AC Origins tombs & pyramids locations, along with explanations of the trials within them.

Once you’re at the tomb, you’ll first have to find the entrance. If you’re in a hurry, the fastest way to do this is by letting Senu scout the area around the building. When you get inside, you’ll be presented with a series of puzzles. Each tomb has a theme to which all its challenges adhere, so once you’ve figured out the first one, it’s only a matter of applying what you know. There will be a stone tablet at the end of the tomb, which will grant you an ability point upon inspection.

Location: Giza
Where to find: Below the Great Sphinx, accessible through a crawlspace at the back.
Walkthrough: When you get to the glowing room (the one with the blue sigils), you won’t be able to pass unless you’ve completed all 12 stone circle stargazing puzzles. Once you’re done with that chamber, you’ll need to place 50 silica into a receptacle. You can get this material from other tombs. When you’re done with both, you’ll get the Isu Armor.

Location: Giza
Where to find: In the southernmost pyramid.
Walkthrough: This one is pretty straightforward, except for one point – when you get into the room with a downward tunnel in the middle of it, you might get lost. Following the tunnel will lead you to treasures, but not the tablet. Instead, as soon as you enter the room, you should look up and to the left. You’ll see an opening in the wall which will lead you to the ability point.

Location: Giza
Where to find: In the northernmost pyramid.
Walkthrough: As you get inside, just keep going up. Pass the crack in the wall, and always keep going up until you reach what seems like a dead end. The room with the sarcophagus might look like it’s the end of the line, but there’s a secret passage behind one of the walls. Pushing the stone plate will let you open it and progress further. 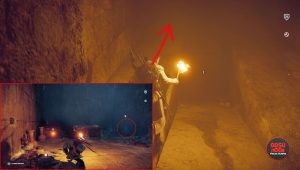 Location: Saqqara Nome
Where to find: In the desert west of Memphis, in the northern pyramid.
Walkthrough: Once you reach the first brazier, you’ll have to look for a secret entrance on the right wall. You’ll soon realize the tomb of Sneferu is all about pulleys and balancing elevators. In order to get out of the first room, you’ll have to put two spools of rope on the platform near the entrance, which will help you use the other platform to exit. You’ll have to apply the same principle in the next room, only with more weights. This will lead you to the tablet, which will grant you the coveted ability point.

We will update this page with more info about various tombs and pyramids once the game goes live.