Assassin’s Creed Syndicate is one of the games we were most excited to try out at E3. Ubisoft was happy to oblige – they showed footage of one of the missions at the booth, and allowed us some hands-on time with the game.
▼Article Continues Below▼
Here are our impressions of the Victorian-era street urchin simulator.

The footage we saw was of a mission in which Jacob followed a Templar who is a member of a rival gang. He first fought a couple of thugs, but then decided to let his comrades take care of them, and started chasing the target. He stole a carriage – as expected, he was attacked by another carriage while driving.


They fought on top of the carriages, which were on autopilot during the battle. It’s nice that you won’t have to worry about steering while you’re punching a man in the face. The chase ended at Victoria Station, where Jacob lost sight of his target. He climbed the roof to scout the area using Eagle Vision. Once he found out his adversary is in a train, he used the zipline (one of the new gadgets) to get down onto the train quickly.

What came next was a fight atop a moving train. While he fought nameless goons, the train hurried around London, showing the beautiful scenery. Traffic seems like it is going to be a big part of the game. Finally, Jacob caught up with the Templar and murdered him in a recognizable manner.

After seeing the mission, I had the chance to play a segment myself. I got to try out a mission featuring a stronghold takeover. The first part consisted of freeing my captured comrades, while the second entailed murdering 10 rival gang members. It’s pretty much what you’d expect from Assassin’s Creed, only this time it has grappling hooks. Everyone knows grappling hooks would make anything better. 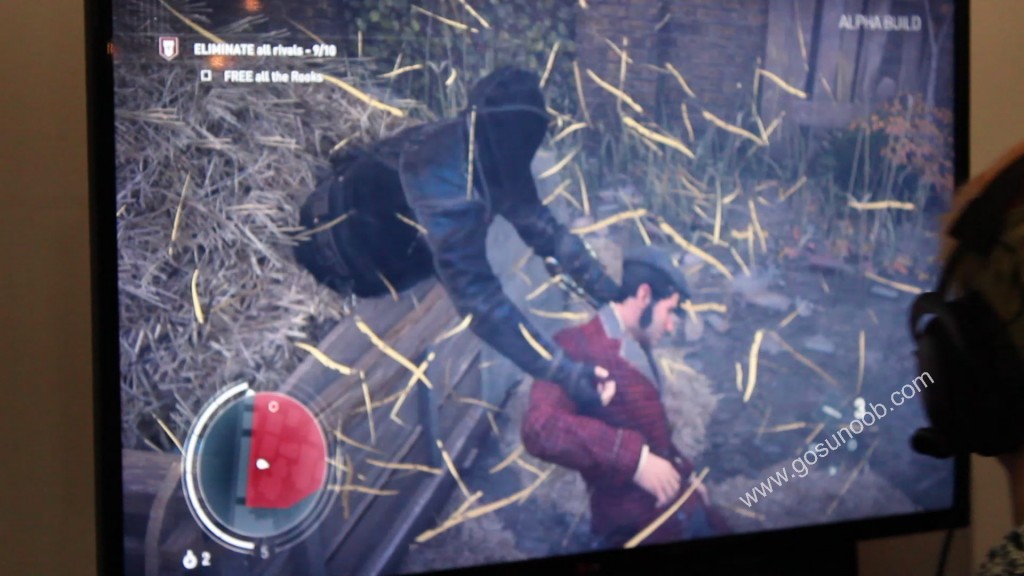 When you’re close to a building, just press a button and a piece of rope will magically take you straight to the top. You can also use it to zipline between buildings, and it adds a completely new layer to player movement. I also had the chance to try out the knuckle duster, which was interesting because it’s the first time an AC game let me use my fists, like a proper gentleman. It gives the combat a much more intimate feel, for better or worse.

When I took over the stronghold, I had to fight the gang lieutenant. After exchanging a few blows, she ran into a carriage and I duly followed. Here’s the really interesting part – if you catch up with her, you get to take the easy way out and just murder her. If you don’t, you’re in for a large scale gang brawl. 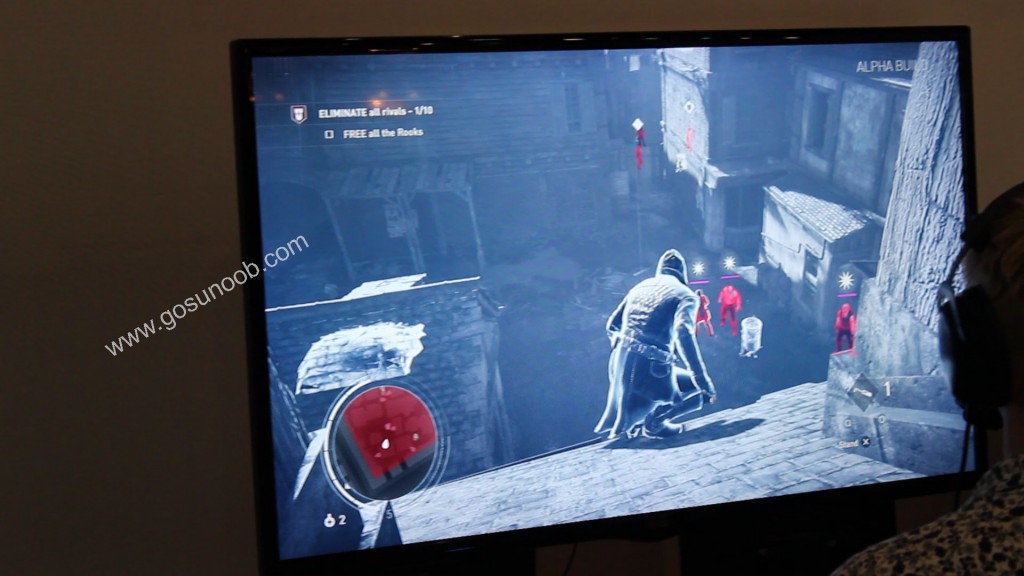 The carriage driving was odd. While I was chasing her, there were others chasing me, trying to ram me off the road. The proper way to deal with this is to let the autopilot handle the driving, while you jump up on the roof and smack the living hell out of your pursuers, then take the reins again and keep chasing the target. You need to watch out for police and other drivers – I didn’t, so I ended up in a 8vs8 battle with her and her buddies. It wasn’t a tough fight by any means, but it could’ve been avoided.

The Ubisoft producer who hosted the demo pointed out you’ll be able to switch between Jacob and Evie at will. I left with the impression that much more will be shown at Gamescom in a couple of months. All in all, the game looked and felt good. There’s a bunch of stuff that expands on what they’ve been building in a good way, like the grappling hook and the traffic. From what we’ve seen, it’s going to be a treat for AC fans everywhere.