Templar Hunt is a conquest activity in Assassin’s Creed Syndicate. In it, you have to infiltrate the designated area, locate and assassinate the Templar in question, and escape from the scene of your handiwork. The Hunt also has additional challenges, such as special ways of killing your target, which give bonus rewards upon completion of the mission. In this guide, we’ll show you the locations of all the Templar Hunts in AC: Syndicate, along with their challenges and rewards. 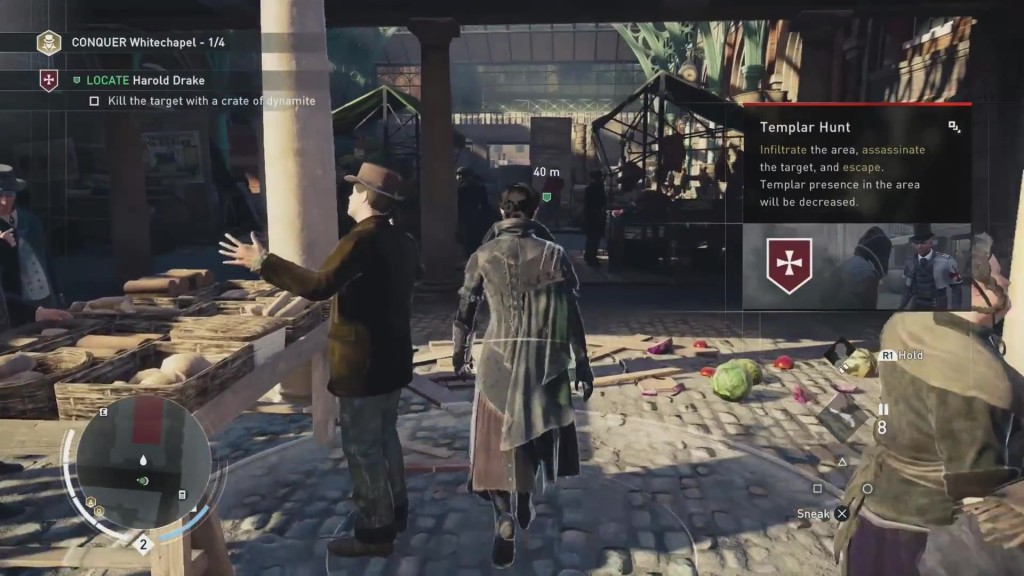 There are 18 Templar Hunts scattered around the game’s rendition of Victorian London.

Challenges: Rewards: Suggested Level:Harold Drake is in a market in Whitechapel, together with two of his goons. Enter the market through the opening in the roof and jump down onto the rope hanging above the marketplace. Use your Eagle Vision to locate the target. Drake is behind some tall stacks of crates near the market’s western entrance. The best option is to go down to ground level and sneak your way to a pile of crates with various produce (check the image below). When Drake approaches the crates on the other side, ignite them and run in the opposite direction. The blast will kill him and you’ll get 100% completion.

Challenges: Rewards: Suggested Level:Scale the wall closest to the church, then head up to the top of the building. You’ll find a scout there – just sneak up to him and kill him. There is a pile of leaves below; jump into it and wait for the target to approach. Once Martin gets close enough, whistle to get him to come over to your hiding place. When he is in range, grab him and kill him with your hidden blade, then pull him into the pile of leaves. Note: When whistling, make sure Martin is the closest enemy to you, otherwise you’ll attract the attention of someone else. With that done, jump out of the pile and go back the way you came to end the Hunt.