Use Eagle Vision to locate clues that will help in your investigation. Bear in mind that you’ll get less XP and money if you accuse the wrong person.

Making the correct accusation in the end will get you:

To start the investigation, meet Artie and Henry Raymond in front of the entrance to the large hotel in the City of London borough. Head west to a park nearby.

You’ll find Prudence’s body in the southeastern corner of the park. Use your Eagle Vision to spot her lying against a tree (she’ll be yellow). She’s apparently been stabbed many times by someone left-handed. It looks like it was a crime of passion. There’s a Packet on the ground near the body, containing powdered medication prescribed by a Dr. Trevor Alton. There’s also his address. Go around the tree and inspect the Handbag. You’ll find that she had two appointments: at 10 A.M. with Trevor, in the park; and at noon with a certain Gilbert, whose address is on the back of Prudence’s agenda. Now head to the park’s exit, where a policeman is holding back a crowd of curious onlookers and look for a Knife on the curb just before the exit. It’s the murder weapon.

You can now choose to visit either Doctor Alton’s office or Gilbert’s home.

When you get to Gilbert’s house, head to the upper floor and use your Eagle Vision to look for a Letter on a bookcase in his study. The letter goes: “Dearest Gilbert, I have something of the utmost importance to tell you. I shall call tomorrow at noon….” You also get Prudence’s address. Go down to the main floor of the house and speak with Gilbert Higgins. Inquire about Prudence and he’ll tell you that the two of them are engaged. It appears that he doesn’t know she’s dead.

You’ll find two notes and three medical files. The Doctor’s Note goes: Drear Miss Knight, I would ask you to please suspend Mr. Shelby’s prescription”. It was apparently written by someone right-handed; you need to figure out why the prescription was suspended. You’ll find the Personal Note on the third floor, on a small table located to the left as you enter the back office. It suggests that the doctor is having a relationship with a patient of his, Claire Knight.

Prudence’s Medical File in on the desk in the second floor office – to the left of the entrance. It appears that Prudence experienced anxiety over her engagement and was given a sedative. She was also allegedly involved with another man. The writing is right-handed. Mr. Shelby’s Medical File is in the same office, on the small table in the back. It turns out that the powder you find turns shy people into extremely outgoing persons, but with some negative side effects. This file was written by someone right-handed. Baxter’s Medical File is in the same office as the Personal note, in a box on the desk located in the northern side of the room. Baxter was apparently addicted to the powder and became quite aggressive. It is time to question the suspects.

Go to the third floor study and talk to Dr. Alton . You’ll notice a cut on his cheek and his apparent shock when he learns that Prudence is dead. He’ll deny he had a meeting scheduled with Prudence and say that the powder you found was not prescribed by him. Now head to the first floor and talk to Mr. Shelby in a room to the side of the lobby near the front desk. He thinks the Doctor took him off the powder without a reason and knows nothing about the side effects. The third suspect is Claire Knight. You’ll find her on the first floor as well. She’ll tell you that she’s sorry about Prudence’s death and that Prudence was visiting the Doctor more frequently of late. She’s jealous of Prudence, but there’s no other reason to think she killed her.

You must now head to Prudence’s house

You’ll find two clues here. The Unsent Letter to Dr. Alton is on the third floor of the house. Go to the north side of the house and climb up through the open window on the third floor. Prudence apparently had been involved in a romantic relationship with the doctor. Prudence’s Diary is on the same floor, in the hallway outside the room with the unsent letter. You’ll learn that Prudence and the doctor had indeed met in the park, and that she thought the doctor would propose to her.

The only suspect here is Lulu, and you’ll find her standing in front of the house once you’ve collected the two clues. Speak with her about Baxter and Prudence and she’ll tell you that she saw them kissing. The doctor had apparently told her that his name was Baxter.

This will unlock Baxter’s house, the final investigation place.

You’ll find seven clues here. Go into the house through the window on the second floor. You’ll find it on the northern side of the house, above the front door. You’ll step into an office. There are five sets of scattered papers here. The first set closest to the window is a death threat to a woman, written by someone left-handed. Prudence was killed by a left-handed person. The second set is near the window papers, in the corner. Apparently, Prudence was breaking off her engagement with Gilbert. The third set is on the desk in the middle of the room and says: “She means nothing to you! You are a monster of my own making!” It could be from the doctor… You’ll find the fourth set on the floor in front of the desk, with the words “I always got what I want. It is my due!” written in it. The fifth set is behind the desk, on the floor in the corner. It writes: “…you are a burden to me. A pathetic, sniveling burden! If only I could be rid of you!”

In the hallway outside the office you’ll find Paper Packets with powder residue on them. Now go to the table in the same hallway and inspect the knives there. They’re the same as the one you’ve found at the park. It does seem that Baxter killed Prudence. Time to accuse him.

Note: If you accuse the wrong person, your reward will be smaller.

Spoiler Alert: Do not read on if you want to figure out who did it yourself.

Go back to Dr. Trevor Alton and inquire about the cut on his cheek. He’ll tell you that it was from a patient – he lied about the meeting he had with Prudence in the park. Accuse him of murder; he will be taken into custody by the police and Doyle will congratulate you on a job well done. 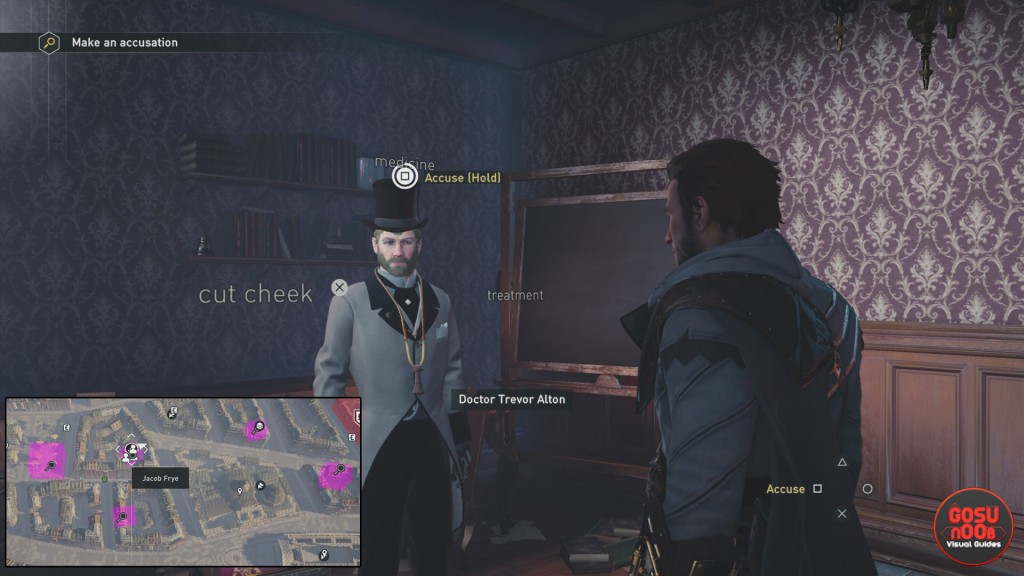 NEXT POSTLocked In … To Die! Dreadful Crimes | AC: Syndicate