Aquarius Nostradamus Enigma is acquired in the Temple district of Le Marais zone in Assassin’s Creed Unity. All of its riddles are connected to the Temple structure, which is actually the Templar fortress. It is the largest structure in the area so it is very hard to miss. Solving all riddles will reward you with a Nostradamus fragment piece you can later use to unlock a special assassin’s outfit. 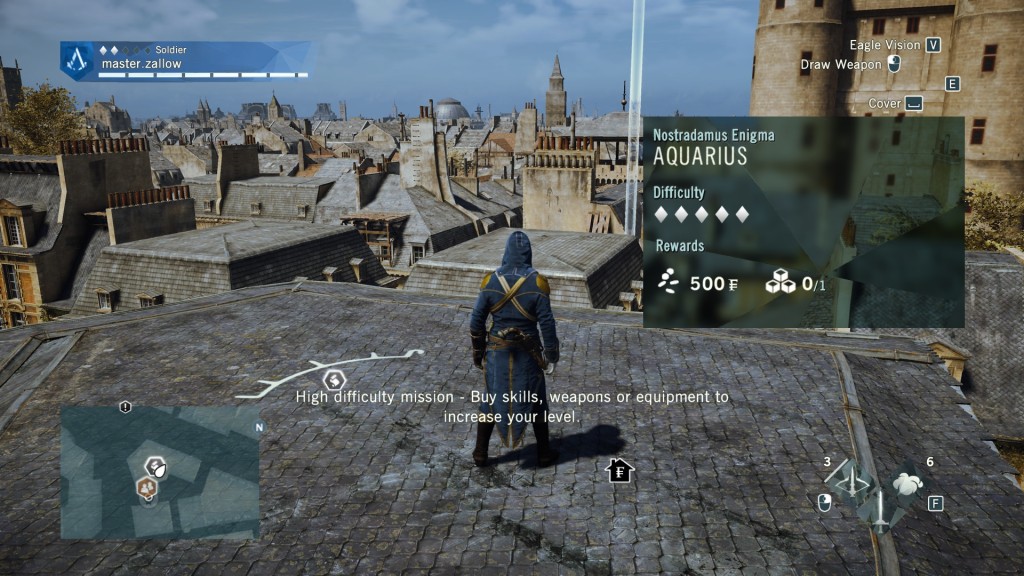 The Poor fellow-soldiers of Christ,
Atop their Stone Dungeon,
Marked their allegiance
In Jerusalem’s Direction.
At first I was not sure how to approach the solution of this riddle, but then I decided to read it like this: The Poor, fellow-soldiers of Christ. This was a Knights Templar reference if I ever heard one. Considering that the Temple (Stone Dungeon) is in this district I went there and found the first riddle solution on top of the tower (in between the four spiky peaks).

At the source of life,
The Full-Moon shaped basin
Quenches the thirst
Of Solomon’s defenders.

The original historic Knights Templar were a Christian military order, the Order of the Poor Fellow Soldiers of Christ and of the Temple of Solomon

(excerpt taken from Wikipedia)
So, this Enigma is going to be about Templar? Source of life from the riddle must be water so I scouted the water encircling the fortress to no avail. I was very happy to find a fountain in the courtyard and hear the familiar chime of the rune. Be careful around the Temple because it has hostile guards you will face as you explore the area.

In the entrails of the Earth,
Between the twin flames,
Lies The Final resting place
Of the first Grand Master.

This was a fun riddle to solve. I guessed that this one is also located in the Templar fortress’ area and there are four underground entrances on the Temple grounds. I went exploring underground and found some tunnels. I saw a chest close by and when I found a way to it I also heard the chime of the rune. That is where I found the solution to the third and final Aquarius riddle.