Aries Nostradamus Enigma starts in Tuileries district very close to the Louvre. It is a side mission in Assassin’s Creed Unity that rewards you with 500 French Livre and a Nostradamus fragment you will use to unlock a special Assassin Armor in the Armor Room found in the basement of your house (Cafe Theatre).
▼Article Continues Below▼
Three riddles you need to solve to finish the Aries Enigma are very hard and I hope that this guide will help you discover all the solution without spending hours googling information like I did. 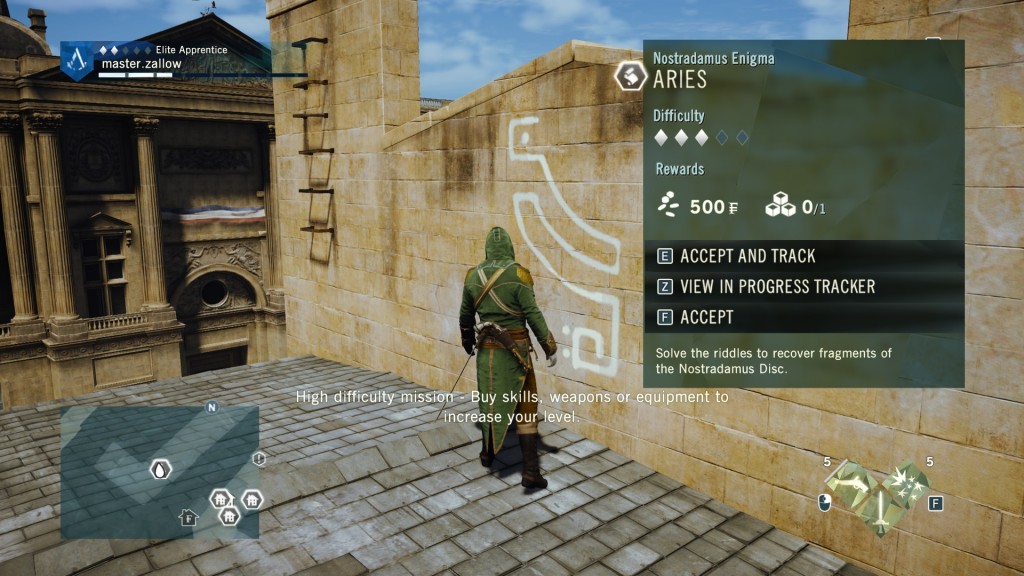 A once-Auguste palace
Become a shelter for the beautiful,
The days of sovereigns tick along,
Up to, but not beyond, Louis.

Apparently, Louvre was initially the fortress of Philippe Auguste. It later became the royal palace up until Louis XIV (if I am not mistaken). This helped me solve the first riddle quite easily by visiting the Louvre and scanning the courtyard until I found the rune above the gate.

By the spirit of Égalité
The Citoyen is welcome in a royal garden
Where the mighty Helios ignites daily
Man’s most destructive power.

I spent an hour googling and trying to solve this one. Search for Egalite and Citoyen (citizen) didn’t help much. What helped in the end is results for royal garden in Paris. There is a Wikipedia article about Palais-Royal for this search and that led me to a landmark on the game’s map where there is a magnifying glass pointed at a little cannon. This is what the last two verses of the riddle refer to and where I found the solution rune on the ground. There is a murder investigation here as well for those that have the gold edition of AC Unity.

From the stones of a fortress breached,
A Concord built to span the divide
From where the minds of men gather
To where their necks are severed.

This one had me stumped for quite a while. I thought it had something to do with the Bastille but what helped in the end was mention of a Concord that spans the divide. I figured it must be a bridge and I saw a landmark of “Pont de la Concorde / Révolution” on one of the bridges in the west part of the map. Going there brought me to the solution of the third riddle and completion of the whole Aries Enigma.