If you’re playing the scout class in Battlefield 1, it’s absolutely essential you have the best sniper rifle possible. All of the ones you can use vary wildly in their performance, although they’re all great. Which one you choose should depend mostly on your play style, but in the end, only one can be called “the best”. In this guide, we’re going to show you the best sniper rifle in Battlefield 1 and tell you why we think it’s so good. 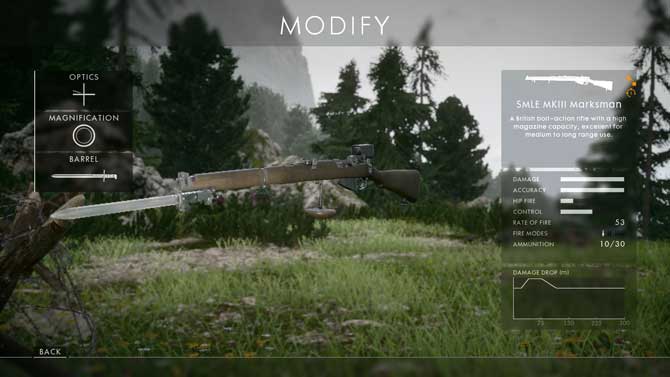 In our opinion, the best one is the SMLE MKIII Marksman. Comparing it to the other sniper rifles, the sweet spot of 100 damage starts at 40 meters and goes all the way to 75. Only then does it start to slowly drop. The start of the sweet spot is earlier than with most other rifles. That range, from 40 to 75 meters, is the most common engagement range for the scout class, and in many situations you will be able to kill your enemies with one body shot.

Why is it better that the Martini-Henry Infantry? Martini-Henry’s sweet spot starts earlier, at 30 meters, but it has one major flaw.

Each round needs to be reloaded separately, so you will need to wait 2,5 seconds between each shot. Keep in mind that SMLE MK3 has 10 rounds in the magazine and fires 52 rounds per minute. That’s almost one shot per second. While using the Martini, you can’t use a scope, so it could be a bit tricky to aim until you get the feel for it.

The Martini has a bullet velocity of only 440 meters per second, which is very slow. While engaging a moving target at long range, you will have to anticipate their movement and shoot in front of them. The SMLE MKIII fires at 740 meters per second, which is much faster and more accurate. The truth is that the Martini looks and sounds amazing, and you should definitely try it out if you haven’t.

PREVIOUS POSTPokemon GO App Icon Disappearing – How To Fix It