EA and DICE have revealed that Battlefield 1 is going to get three more DLC packs. They haven’t talked about release dates yet, but they’ve given short descriptions for each one, accompanied by several pieces of concept art. Seeing how the French expansion is coming in March, don’t expect any of the others soon.

In The Name of The Tsar is going to focus on the Russian army. Expect snowy maps, perhaps with some vehicles unique to the environment. The image and the official description make us think at least one map will be large enough to have different vehicles and opportunities for fightning on land, sea and in the air.

Enter the biggest front of WW1 with the Russian Army. Ride in Galicia with the legendary Hussars during the Brusilov offensive. Partake in the skirmishes of the Albion assault in a freezing archipelago and fight in the snow covered ravines of the treacherous Lupkow Pass. 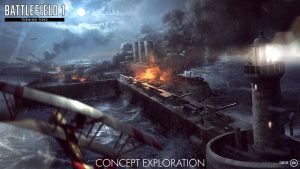 Turning Tides is all about the Turkish skirmishes. Maritime warfare is the key word here, as the most famous battles in the region took place on and by the sea.

Participate in the amphibious warfare of WW1. Embark with the new destroyer into intense tactical naval clashes. Master the coastal class airship in the fierce interplay between land, air and sea. Engage in the daredevil Zeebrugge raid and storm the beaches in the first days of the Gallipoli offensive. 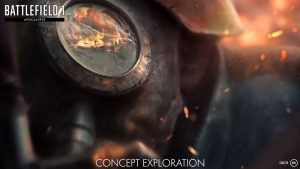 Apocalypse is the most mysterious one. The image just features a gas mask with the reflection of a raging fire in the distance. The description is equally puzzling, and doesn’t reveal that much.

Go over the top in the most infamous battles of WW1. Conquer bitterly contested ground with brutal tools and unique weapons born out of desperation and deadlock. Never before have the nightmarish horrors of the Great War been closer as you descend into hell. Prepare to enter the Apocalypse.