Gehrman, The First Hunter, is among the last and one of the toughest bosses in Bloodborne. To defeat him you will have to truly master your character and discover all the moves the boss does.
▼Article Continues Below▼
You will also have to have a rather high level, full stack of blood vials and a full stack of quicksilver bullets. Fire, bolt or arcane buffs for your weapon will be very helpful as well. In the guide bellow I’ll try and walk you through the fight stage by stage and explain what to look out for and how to approach different situations. It took many hours of attempts to fully learn all the moves in all phases and how to counter them and I hope that sharing this experience with you will make your fights with Gehrman a bit easier. This, being almost the last boss of the game, makes the following guide spoiler heavy, so, if you do not want to find out about how to get different endings in the game or why you have to fight Gehrman, you should stop reading now. 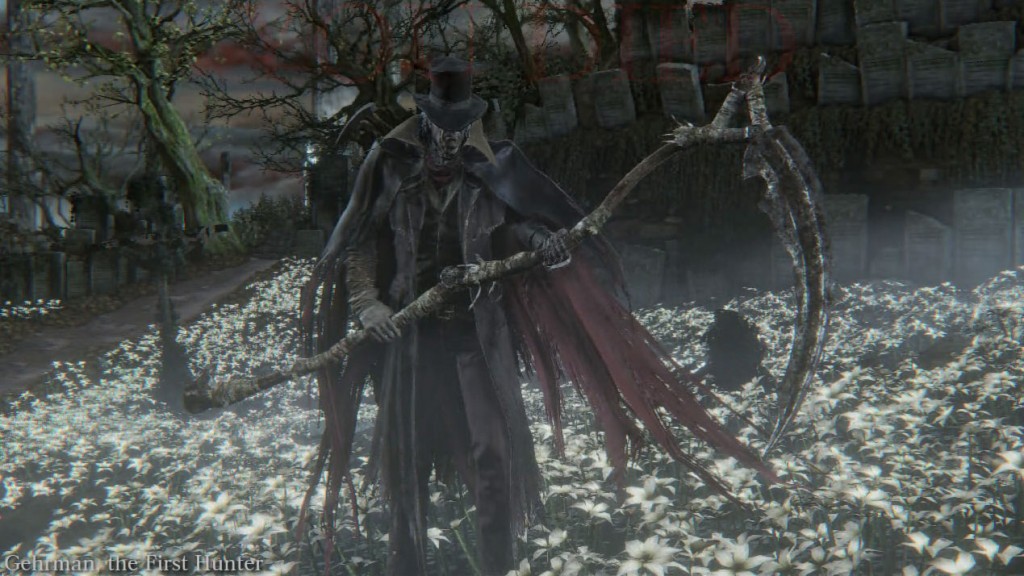 You will know that you reached the end of the game when you come back to the Hunter’s Dream and the workshop is on fire. At this point you will be able to go right of the doll to a previously locked iron gate and walk into a field where Gehrman awaits. There are several endings you can have in Bloodborne and we’ve written a separate article about them here. When you talk to Gherman he will offer you a choice to end your suffering or you can Refuse his offer to start the fight. If you consume three umbilical cords and refuse his offer you will star the fight and reach, what many believe, to be the true ending of the game.

Fight consists of three phases. Gherman uses a scythe two-handed weapon initially, which he transforms into a one handed weapon with a gun in the second phase, and in the last phase alternates between the two forms. As you progress through the phases the fight becomes more difficult and he has additional attacks you need to be aware of. Here’s a quick summary (tl;dr version):

He will use his scythe in two-hand mode during this section of the fight. Key to this phase is to interrupt his scythe attacks with your gun and do a visceral. Two to three viscerals should push him into the next phase. I usually come a bit closer to him to bait him into initiating his scythe attack. He can either extend his scythe in an attempt to draw you close to him and slice you up real good (dodge away as soon as you see his scythe moving), or raise his weapon behind his right shoulder and do two slice attacks. Either way I dodge away from him as soon as he initiates his attack and wait for his second swing to shoot and interrupt him. If you move away far enough he’ll do a long range attack that you gotta dodge through. You should really practice until you have this phase down to not using any potions at all.

After about two viscerals, or about 3/4 of his health down, Gherman will transform his scythe into a one handed sword and a blunderbuss. If everything goes perfectly you can be close to him when he tries transforming his weapon. You can do several hits with your weapon here and do a nice amount of damage, while interrupting his transform. Rest of this phase is spent in the following fashion. Just before he initiates his attack, which is usually started by him leaping towards you, you dodge into him. If he is attacking with sword he should fly by you and you can dodge, turn around and wait for him to finish his combo while swinging into air. You may be able to put in just one hit here, but be careful to dodge away immediately afterwards. If you dodge into him and he draws his gun and shoots in your general direction you should be right next to him with an opportunity to do two to three hits. Keep doing this until he stops and starts a sort of a summoning ritual, which is the beginning of phase 3.

Half way through his health Gherman will stop and do a chant. You can take this opportunity to do some damage, but be ready to move away. Last phase consists of a combination of the previous phases with additional moves being introduced into his attack rotation. The biggest change is that he is not easily interrupt-able anymore. I managed to interrupt him and do viscerals by consuming an item that increases your quicksilver bullet damage temporarily, but it is just not worth the hassle, in my opinion. First recommendation is for you to keep circling him throughout this phase. I usually go in a clockwise direction and this is useful for avoiding several of his attacks. The gist of this phase is to avoid his attack and do a single counter hit. Whenever I got greedy and attempted two or more hits I paid for it dearly.

He will switch betweeen two and one handed attacks all of the time. He has one new attack for each form. When in 2h form he might jump high into the air and send a shockwave towards you. The only way I managed to avoid this without taking damage is to push the left stick down and to the left (SW direction) and keep dodging away, while the boss is targeted. In 1h form he can now shoot you with his gun and stun you. If you are close to him he can do a visceral attack on you, so make sure you stay in mid range and dodge away the moment the stun breaks.

You will certainly need several attempts to get comfortable with the third phase, but it all boils down to dodging his attack with two or multiple dodges away from the boss, all the while attempting to stay in mid range to him. When he is about to finish his combo dodge into him and do a single hit with your longer range attack. Dodge immediately away from him after you hit him (and he usually dodges away from you) and continue circling him. Repeat this for about 4 minutes until you kill him. If you use fire or bolt paper buff extra damage might speed this phase up a bit. Best I can do is recommend you watch our kill video guide and learn his moves through attempts. As always with Bloodborne you’ll have to be patient, calm and not greedy and that will make this fight much easier. Good luck hunters and welcome to New Game +.