One Third Of Umbilical Cord is a special item in Bloodborne. If you collect three of them and use them before you talk to Gehrman outside the burning house, you’ll get the true ending, and a golden trophy called Childhood’s Beginning.
▼Article Continues Below▼
In this guide, we’ll show you the locations of the four One Third Of Umbilical Cord, as well as the requirements for getting them. 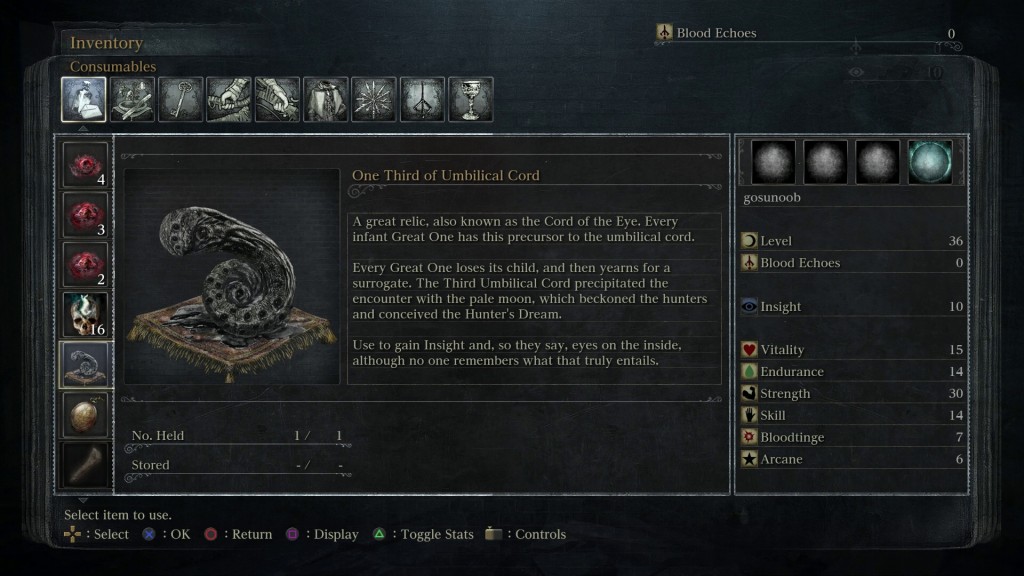 Where To Find One Third Of Umbilical Cord

There are four pieces of the umbilical cord, even though the name suggests otherwise. You only need three, so there’s some room for mistake. Here are the locations for all four:

The first piece you can get is located in the Abandoned Old Workshop. After you kill the Blood-starved Beast, go to the Healing Church Workshop through Cathedral Ward. Go around it to the back, and enter the room with the abyss. Carefully jump off to the left as soon as you enter – the door to the workshop will be in front of you. The One Third Of Umbilical Cord is located on the altar inside the house.

We also have a detailed guide on How To Find Abandoned Old Workshop.

The second piece is in Iosefka’s Clinic, guarded by Iosefka herself. You’ll need to kill her to get it, but only after you’ve dealt with Rom, The Vacuous Spider. If you kill her before that, you’ll get a Caryll Rune instead. Find the cave with the poisonous lake in Forbidden Woods, near the small village. Cross the lake, climb the ladder and go around the clinic. Climb another ladder, and go inside. Iosefka is in the upstairs room, on the operating table.

Detailed guide on How To Find Iosefka’s Clinic.

When you meet Arianna, you must send her to the Oedon Chapel. After you’ve killed Micolash, Host Of The Nightmare, she’s going to give birth to a baby below the starting room of Cathedral Ward. When you finish the boss fight, awaken at the Cathedral Ward lamp. You’ll see Arianna isn’t in her usual place – turn around and go down the stairs, then down the ladder. She will be sitting in a chair in the corner, crying. Kill the demon baby, and you’ll get the Third Umbilical Cord.

This one is simple – when you get to Mergo’s Wet Nurse, defeat her. You’ll find her in the Nightmare of Mensis area. Here are some tips, in case you get stuck: keep moving throughout the whole fight, and don’t get greedy with your hits. Having some Molotovs on you would also be a good idea. The last One Third Of Umbilical Cord will drop as a reward for killing her.

After you’ve collected three pieces of One Third Of Umbilical Cord, don’t forget to use them before talking to Gehrman for the last time. If you do, you can back out of the conversation once he offers you the choice to submit or refuse. Use them, talk to him, kill him, then kill Moon Presence and enjoy your super secret ending!