Rifle Spear is one of the trick weapons in Bloodborne. It is a spear with a gun attached, so you can both pierce and shoot enemies with it.
▼Article Continues Below▼
It can be found in Old Yharnam. In this guide, we’ll show you the location, stats and move set of the Rifle Spear.


The most obvious selling point for it is the rifle part – it is the only weapon we’ve encountered so far that can parry while in two-handed mode. The two-handed charged R2 strike has unbelievable reach, and can make a lot of enemies much easier to deal with, in the right hands. The regular attacks offer decent reach with acceptable damage, too. The melee scales decently with Skill, while the shooting is governed by Bloodtinge. 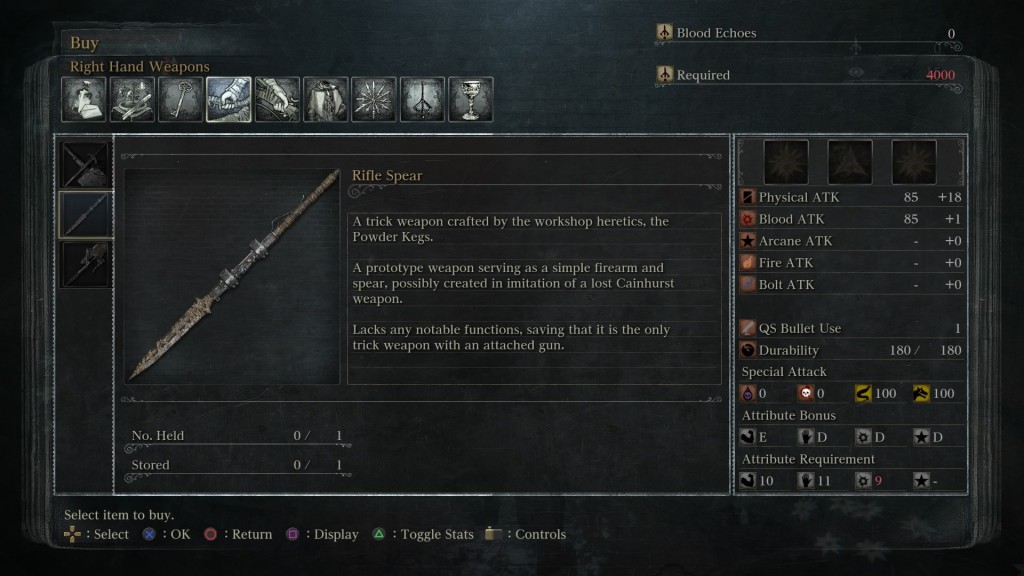 Where To Find Rifle Spear

Awaken at the Old Yharnam lamp and head outside.

You don’t have to fight any of the enemies at this point, if you’re quick enough.

Do not jump down all the way – it’ll kill you.

Turn around and enter the building. There are a lot of enemies here (ten or so), so be careful.

The Rifle Spear can be found on that body. There is another way to get this weapon, but it’s costly. There is a hunter in Old Yharnam called Djura – he’s the one shooting at you with the Gatling Gun from the rooftops. If you kill him, you’ll get the Powder Keg Hunter Badge, which unlocks the Rifle Spear (4000 Blood Echoes) and Stake Driver (8000 Blood Echoes) at the Messenger Bath in Hunter’s Dream.

There’s supposedly a non-lethal way to deal with Djura, too. If you enter Old Yharnam for the first time while wearing the Black Church Armor Set, then kill the Blood-starved Beast and approach him, he won’t shoot you. After talking to him, you’ll get the Powder Keg Hunter Badge, and unlock the items at the Messenger shop. That’s just speculation, though, so don’t put too much faith into it.