Caldera is an upcoming new map that is set to make its debut in Call of Duty: Warzone. Set in the Pacific, it will replace the Verdansk map. It will also add several interesting things, such as dogfighting, to the game. This will officially start The Warzone Pacific Era, and the game will even change its name to Call of Duty: Warzone Pacific. Besides several additions to the game, this will also see RICOCHET Anti-Cheat system added to the game. Our Warzone Pacific Caldera New Map Release Date guide covers everything you need to know about this update. 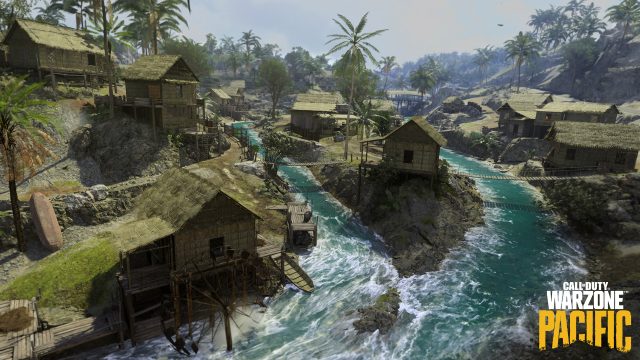 The Warzone Caldera Pacific map will release on December 2nd, 2021. Call of Duty: Vanguard players will be able to exclusively access it 24h earlier, on December 1st, 2021. So, for most players, Season One will effectively begin on December 2nd. You will also be able to purchase a new Battle Pass and receive two free weapons. Also, players will get the Vanguard Royale playlist, which will showcase and explain all the new content, such as airplanes and anti-air weaponry.

Activision is very proud of the Pacific Caldera map. They claim that it will have over 200 points of interest, and that this sprawling map contains sandy beaches, lush jungles, mountains, and more. All operators and cards from Black Ops Cold War and Modern Warfare will get transfered to Warzone Pacific. To quote the blog post where this was announced: “Your progression – for your Player Level, Battle Pass system, etc. – is synchronized across Vanguard, Black Ops Cold War, Modern Warfare and Warzone Pacific, and the Seasonal Levelling and Prestige System will return. This also means your level will reset to Military Rank 1 within all games, but this only applies to XP; all content you previously unlocked will still be available.”