If you are wondering when is Warzone Pacific Season 3, you’ve come to the right place! The third season of Warzone since the release of the new map Caldera is just around the corner. Thus, information is slowly building up about the new content. Just like with all other seasons, Warzone Season 3 is set to bring a slew of new content alongside numerous improvements and changes. Read on to learn everything we know about Warzone Season 3 2022. 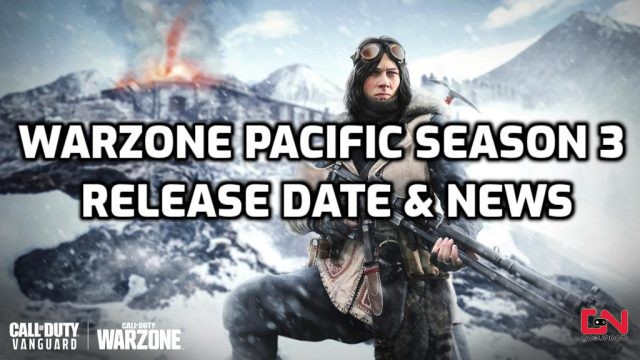 The first Warzone season of 2022, Warzone Season 2, was slightly delayed as developers had worked on fixing more pressing issues at hand. Thus, this will affect the end date of Season 2. And consequentially, the start date of Season 3 as well. While nothing is yet officially confirmed, based on the battle pass timer, Season 2 is set to end on April 26th, 2022. Given that there’s practically no downtime between the seasons, Warzone Season 3 is set to be released on April 26th.

At the moment, there is no official news about the new season. We can expect several new Vanguard weapons, new operator skins, and a brand new battle pass. There will also be new modes and challenges, new special events, and a new overarching theme of the new season.

There will probably be several new POIs on the Caldera map, as well as numerous improvements and bug fixes. Raven Software will also use the opportunity to introduce balance changes and weapon tunning based on the performance in the previous season.

When it comes to leaks, there are several of them, coming from various prominent leakers. Apparently, adjustments for directional footstep audio are expected to come in Season 3. The community has been complaining about the game’s audio since the release of Warzone Pacific, and that’s something developers are actively working on fixing it. Another “major” leak is that, supposedly, the King Kong & Godzilla crossover event is set to come in Season 3. And that’s about everything we currently know about Warzone Pacific Season 3. Make sure to come back as we will update the article with new information as it becomes available.

NEXT POSTReturn to Monkey Island Set to Release in 2022