In our DMZ Anti-Air Mission guide for Warzone 2, you’ll find everything you need about this Legion Tier 2 mission. The long-awaited Trakov-like DMZ mode is finally here! And, in our humble opinion, it is one of the most fun aspects of Warzone 2. This is thanks to the variety of missions, narrative elements, and the mix of single and multiplayer aspects. In this guide, you’ll learn how to capture a SAM site, shoot down an aeroplane, and loot a dropped supply drop in Warzone 2 DMZ. 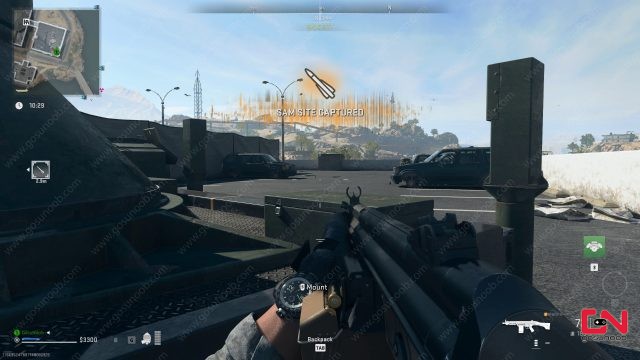 How to Capture a SAM Site in Warzone 2 DMZ

First thing first, let’s see what you need to do in order to put one of these SAM Sites under your control. The first step is locating one SAM site on your map. Many players are confused here because the map’s mission icons are usually green. However, you should search for the white rocket/missile icon in this case. Depending on where you spawn, try to find the one nearest to your location. That will minimize the chances of stumbling upon some other players there. Thus, it will be easier for you to clear and capture that particular SAM Site.

Before approaching the site, make sure that you are well-equipped with enough armour plates and ammo. Once you reach the nearest SAM Site, there will be a bunch of NPC enemies. Take them out as fast as possible, and then interact with a missile launcher’s computer. A bar will appear with the “Capture Time” text on it. It will slowly fill in until you completely take control of this SAM Site. During this process, you’ll need to defend the site from NPCs and other players.

When the process is complete, the missile launcher will start shooting at any aircraft in its proximity. You don’t have to do anything here; it will do it automatically. You will only need to defend it until it shoots down a supply aeroplane. Once it locks down on a supply aeroplane, you will be notified, and you’ll actually see it hitting a plane. And now Tasks 1 and 2 are completed.

We have completed the “Capture a SAM Site” and “Wait for your captured SAM Site to shoot down an aeroplane” tasks. The final task is to loot a dropped supply drop. Immediately upon completing Task 2, check out your map to see where the loot dropped. The icon is called “Supply Drop”. Set a marker on it, and rush there as soon as possible. Use a vehicle if possible, and always make sure to have enough ammo and armour plates, as there will be other players there.

Now, the final issue many players had with this mission is due to a buggy interaction with the loot. Namely, the capturing process doesn’t work properly for everyone. “If you are unable to capture the supply drop as I was, fiddle with your Use Button settings,” wrote YouTube user Marcie301. “I had mine set to Prioritize Interact and I couldn’t do it. I switched to the default Tap to Reload and was able to do it”. So there you have it, that’s all you need to know about the DMZ Anti-Air mission.

NEXT POSTWarzone 2 Loadout Drop Pings Not Working, Inaccurate or Wrong