If you have the “MW2 DMZ faction missions not unlocking” issue, you should know that you are far from being the only player with this annoying problem. Warzone 2’s Tarkov-like extraction mode, DMZ, has quickly become one of the most popular modes in Call of Duty. It has players doing various missions across Al Mazrah for three different factions. Each faction has several Tiers of missions. However, there seems to be a bug currently where some Legion Tier 3 missions are not showing or disappearing. If you have this problem as well, read on as we explain what we know about the issue. 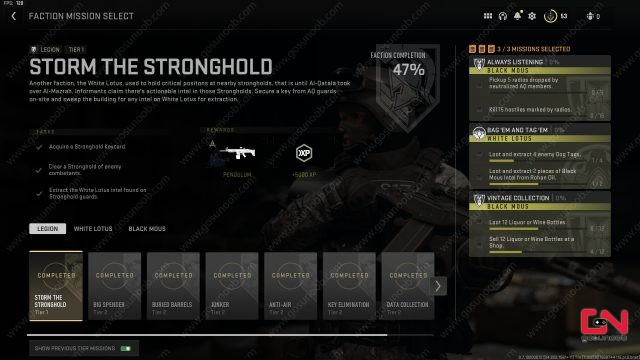 One of the core mechanics of the new DMZ mode is the faction missions. The Legion, White Lotus, and Black Mous will give you various missions of various tiers which you unlock as you complete enough missions of the previous tier. There are six total tiers for each faction. However, currently are many players stuck on their Tier 2 faction mission, as it seems that there’s a bug preventing players to unlock their Legion Tier 3 missions. And for some players who have unlocked their Tier 3 missions, they have disappeared seemingly overnight.

“Was completing the legion tier 2 missions with a friend where we both completed all tier 2 missions. He unlocked tier 3 while I didn’t. We both haven’t completed lotus tier 2 yet,” says Reddit user Astosphis. Another Reddit user, that goes by the name Putrid_Conclusion469, says that their Legion missions “straight up just disappeared”, although “the White Lotus missions are fine though”.

The issue is currently widespread and it is clearly a bug which will hopefully be fixed soon. For now, there doesn’t seem to be any workaround that will bypass this problem. Some players report that using a “Scan and Repair” feature on Battle.net or “verify the integrity of game files” on Steam has fixed the issue for them. However, other players say that it didn’t help them. At the time of writing, the developers are yet to acknowledge the issue. We will make sure to update the article as soon as there’s more information.

NEXT POSTHandwritten Note from Sailor to Captain DMZ Warzone 2