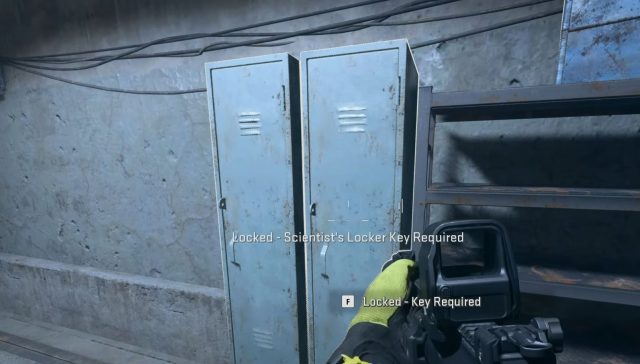 Where is Scientist’s Locker Location in DMZ Warzone 2

So, what does the Scientist’s Locker Key unlock in DMZ? As the name implies, it unlocks a certain locker which belongs to a scientist. But where is this locker? As is always the case with these keys in DMZ, the very first thing you will want to do is to check out the coordinates provided by the key in the inventory. And, in this case, they say 5E. Thus the 5E tile is where you want to go. As you will quickly see, this tile is populated by the objects belonging to the Zaya Observatory complex. Several domed structures dominate the area, including telescopes and radars. However, despite being an observatory, for the purpose of finding the Scientist’s Locker, we actually need to go underground. Hence, that’s where we will find what the Scientist’s Locker key unlocks.

The Scientist’s Locker is located in a bunker-like underground building in the central-northern part of the Zaya Observatory complex. Check out our map below for the exact location. Being a bunker rather than a building, this object is not represented on the map. It is located underneath a hill precisely between the northernmost domed structure and the semi-circular building southwest of it. There are two ways to enter. Either from the southwest via an entrance there, which you can see in the image below. Alternatively, you can enter via a massive hole in the roof of the underground complex. Once inside, head further right until you spot a few lockers. And one of them can be unlocked with the Scientist’s Locker Key!