Are you having performance issues in Warzone 2 such as stuttering, frame drops, lag and screen tearing? Call of Duty: Warzone 2.0 is finally here! Developed in a brand new IW engine, it boasts new and improved visuals as well as many new features. However, the new engine usually means new technical issues, poor performance and various visual glitches. Hopefully, the developers will work on fixing them as soon as possible. In the meantime, in our guide, you will find several possible solutions how to fix Warzone 2 performance issues. Read on to learn what can you do to fix Warzone 2 micro stuttering and frame drops. 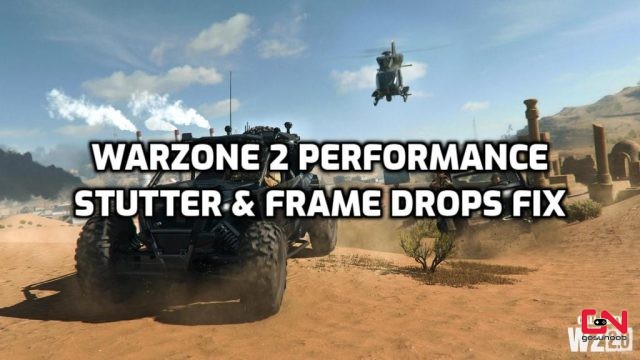 How to fix Warzone 2 Performance Issues

First off, you probably know by now that although free and separate experience, Warzone 2 uses the same client and launcher as Call of Duty: Modern Warfare 2. Even if you don’t own MW2. Thus, in technical terms, given that they are built in the same game engine, they are essentially the same application. Therefore, they share many of the same issues in terms of performance. For many of them, we will simply have to wait for the developers to deploy fixes and patches that will iron out all the technical problems. However, until that happens, let’s see what you can do in order to alleviate or remove some of these problems.

Below you’ll find some of the most common issues that can be on your side, and which can result in poor performance and technical issues. When combined, they can significantly hinder Warzone 2 performance and make the game run miserably. Thus, make sure to check each and every one of them, in order to cross them out from the list of potential problems.

One of the most common reasons for poor performance in Warzone 2 is when people underestimate the game’s PC specs. This is not the same game as the original Warzone, built on a Modern Warfare (2019) engine. It is a much more demanding game, and you’ll need a newer rig to run it properly. Thus, make sure to check Warzone 2 PC system requirements, and set your display settings accordingly in order to have a balanced performance.

Outdated drivers are often the culprits of numerous technical issues in video games. If you are suffering from Warzone 2 frame drops and micro stutters, check if you have the latest GPU driver installed on your device. In addition, follow Beenox’s official Twitter account, as they can often point out if some drivers are causing issues.

Many third-party apps that operate in the background can either eat up your PC’s resources or cause some conflicts, resulting in poor Warzone 2 performance. Thus, make sure to turn off any unnecessary apps and overlays that you are not planning on using while playing Warzone 2. This includes in-game overlays such as NVIDIA overlay, Steam overlay, Discord overlay, AMD Adrenalin, and many others.

If you are playing the game on a PC (Steam or Battle.net), some issues might have been caused by an incomplete installation or corrupted files. This instability can lead to Warzone 2 frame drops and stutters. Thus, you’ll need to make sure that everything is installed properly by verifying Warzone 2 files. Follow the instructions below to verify Warzone 2 game files:

To do this on Battle.net, simply click on a blue cog icon next to the “Play” button and from the menu select “Scan and repair”. Battle.net will start checking Warzone 2 data for any potential missing or corrupted files and fix any issues it finds. If even this doesn’t help, try completely deleting and then reinstalling the game. Sometimes a fresh installation was all that was needed to fix Warzone 2 performance issues.

If you are still having performance problems, try using the “Shader optimization” feature in Graphics settings, under “Details and Textures”. It has been reported that it does wonders for many of the technical issues, such as micro stutters in Warzone 2. Lastly, make sure that the “Texture streaming” feature is turned off, as it is known that it causes numerous performance issues. For more info on how to maximize your FPS, check our “Warzone 2 Best PC Graphics Settings” in-depth guide.