The offering at this year’s Gamescom was kinda thin, if we’re being honest. Most publishers have laid down their cards during E3, so there wasn’t much surprise in the lineup. The vast majority of demos were just regurgirated stuff from LA, so there wasn’t too much excitement in the air. One of the rare exceptions was Cyberpunk 2077, which was on everybody’s lips. This was the first time the game was shown outside the US, and the presentations were packed to the brim with curious journalists from around the world. I was lucky enough to be able to squeeze in among them, and what follows are my impressions from the hour-long hands-off demo.

When that one trailer was released during E3, a lot of people were excited. However, not everyone was happy to see it. A number of people thought it was all style and no substance. Even genre godfather William Gibson chimed in, saying it made the game look like “GTA skinned-over with a generic 80s retro-future”. I was among the not-too-thrilled crowd, but I noticed a vast discrepancy between what I saw in the trailer, and what fellow journalists were saying after seeing the game in action at E3.

Having seen V in action myself, though, I’m still cautious, but much more excited about the whole thing. Until this point, the only thing CP2077 had going for it was that it was being made by the folks behind The Witcher 3. That’s a big plus, to be fair, but I wasn’t born yesterday – people make mistakes, dramatic staff changes occur. There is weight in a name, but there’s more to it.

The presentation covered the very beginning of the game – creating the character of V and playing through the first couple of missions. The devs didn’t want to waste time on the character creation screen, so we didn’t get to see the customization process, but we did get a glimpse of some of the options. No matter your gender choice, you will play as V, a hardened mercenary with a set past and voice, but otherwise much more malleable than Geralt ever was. We’ve heard about the flexible class system a few months ago, but we still don’t know how it will function. What we do know is that you won’t straight up pick a class when you start the game, but you will get to choose several other stuff, like your origin and childhood hero.

Afterwards we were dropped in what is probably the opening/tutorial mission. V and his (it was a male V this time) sidekick took on a job that involved raiding the hideout of a gang that dabbles in “augmentation extraction”. Apparently, the drugged-out body part scavengers have kidnapped a woman of high standing, and her kin didn’t approve of this. The pair entered the hideout guns blazing, guided all the while by a third comrade behind a screen miles away.

It’s immediately much different than what you’d expect from the developers of The Witcher 3. We knew it would be played from the first person, but nobody mentioned how frantic and visceral it would be. There’s always a calm before the storm when you play as Geralt, the moment when two opponents circle each other, each looking for an opening. With V, there’s no choreography involved, no deliberation, just pure reflex and bullets spraying everywhere. It’s a shooter through and through. 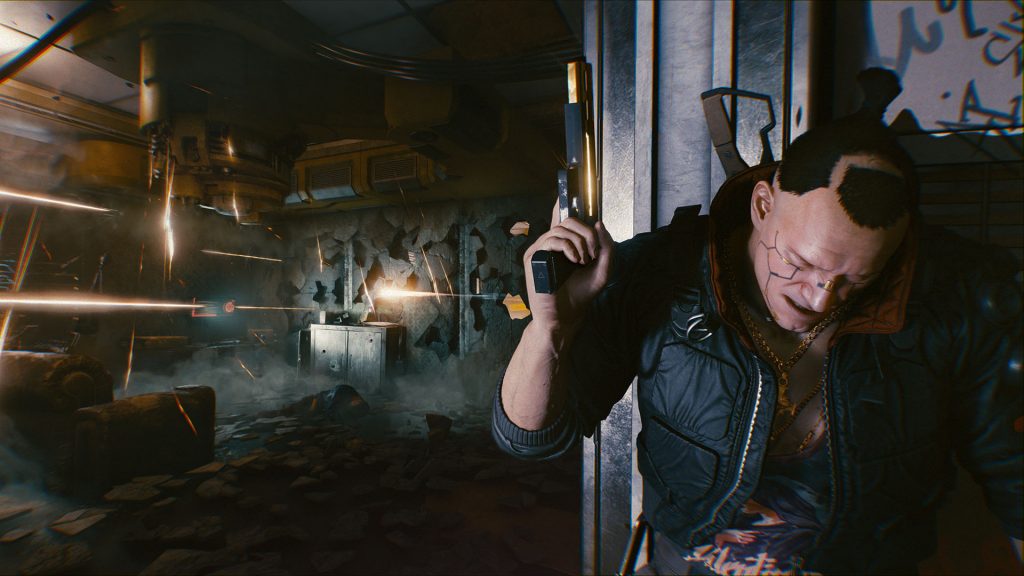 The RPG part seems to be more about avoiding conflicts, or giving you an edge when combat starts, whether it’s an augment that gives you more info about opponents, the mechanical know-how that allows you to unlock a secret passage and get a better vantage point before you start shooting, or the hacking skill that helps you access security systems. That planning element is still present – instead of brewing potions and oiling up your blade, you’ll spend your time scouting the arenas, looking for anything that might give you the upper hand.

After that opening mission, the screen faded to black and we were transported to V’s apartment. In line with the talk of more diverse romance options, we were treated to a shot of a hunky, butt-naked dude getting out of V’s bed, and probably his life as well. This is where we got to see the counterpoint to all the glitz from the E3 trailer. The neighborhood V lives in is, according to the devs, not the worst Night City has to offer, but it was plenty bad.

The highrise was filled with cramped apartments that trade proper daylight for cheap displays, connected by filthy hallways stuffed with vending machines and shady shops. When we got to ground level, it was an incredibly busy place – pedestrians all around, cars zooming down the road, bright lights vying for your attention from every angle. The world in the Witcher 3 was a much more serene place, with life going on at a much slower tempo. Even the big cities, like Novigrad and Oxenfurt, were tame compared to what we’ve seen of Night City. It’ll be interesting to see how CD Projekt Red deals with the increased density. 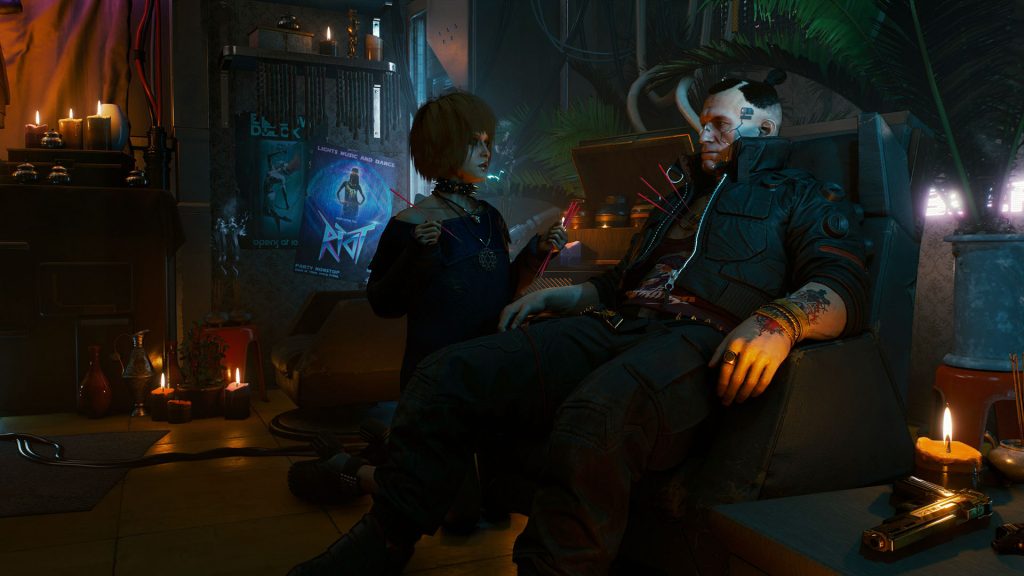 The second mission was the more meaty of the pair. In it, a famous fixer asked V to get him a particular drone, which was stolen from a nasty corporation by a nasty gang. He didn’t care how the job was handled, only that the story ended with the drone in his possession. There were a handful of big branchings in the quest – would we enlist the help of the corporation’s agent looking for the stolen shipment? Should we go into the gang’s hideout calmly and try to trade, or simply kill them all and take what we came for? The most interesting part is that you’re not expected to uphold your end of any bargain.

You can make a deal with the corporation to use their money to buy the drone, which would allow them access to the gang’s servers. But then, you can just pocket the chip and deal with the problem another way. It looked like the player was free to break any agreement they made. The developers assured us all of these decisions would have far-reaching consequences, but we didn’t get to see any of those, since our time with the game was rather limited.

There was also a wide variety of weapons on display – whether that was orchestrated for the demo, or representative of the final version of the game remains to be seen. V started off with an automatic pistol, your standard lead stapler – low damage output, high rate of fire. It made the enemies seem like bullet sponges at first, but that concern was laid to rest when the player got hold of a double-barelled cybershotgun. The glowing gizmos welded onto the ancient frame allowed the bullets to pass through cover. Bursting both cartridges was enough to deal with most enemies, provided they were in range. 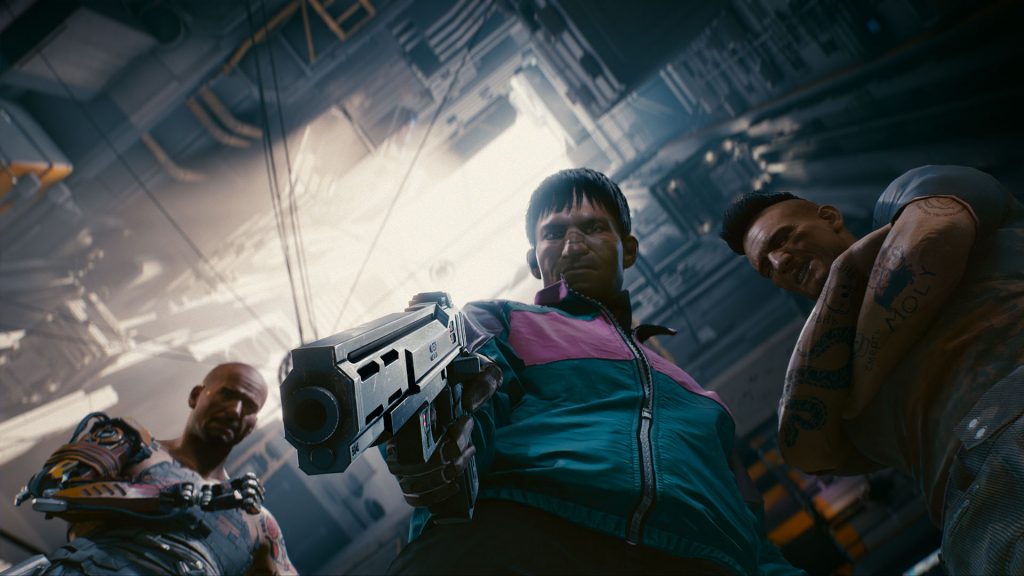 The scuffle in the base of the gang we mentioned (the devs decided to attack them after getting the drone) also let V acquire an SMG with homing bullets. When they equipped it, a large rectangle would appear, covering approximately one third of the screen. After pulling the trigger, the bullets would automatically seek out targets in the rectangle. There was a robust assault rifle without a fancy twist – it seemed to do decent damage, but required the player to actually aim. The Macguffin drone also turned out to be a useful ally – a spider-like robot with remarkable destructive capabilities, controlled via a chip V slotted into the base of his neck.

It was a thrilling ride. The demo left me wanting for more, which is always a good sign. The team’s pedigree was evident in the writting, the sharp dialogues and little twists they put on each of the stories we had the chance to hear. I never really enjoyed the combat in any of the Witcher games, which is why I was excited to see the first person gun-play in action. Healthy scepticism aside, it was crunchy, fast and dirty. If you’re looking for a lazy comparison, what I saw at Gamescom this year was closer in execution to the later installments of the Deus Ex series than to your favourite morally gray monster hunter. There’s a lot of new ground here for CD Projekt Red, but what little they decided to show off managed to inspire confidence.