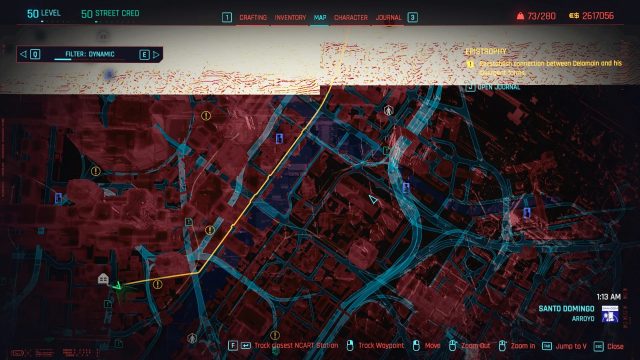 The broken map bug in Cyberpunk 2077 started appearing on Wednesday, October 13th. And, judging from reports, it seems that it currently only affects PC gamers. Thus, it’s safe to say that this is a PC-related bug. The second thing important to notice is that there were no updates and patches on that day for Cyberpunk 2077. This is important to point out because nothing changed within the game to make the bug suddenly appear. So, why is this happening now and how can it be fixed?

The most likely cause for this map glitch in Cyberpunk 2077 on PC is the latest Nvidia driver. Nvidia has just released driver version 522.25 for their GPUs. And, based on what other players with the same issue say, the reason for this map glitch is almost 100% the new drivers. Several people have reported that after they have rolled back to an older version of the driver, the broken map bug has disappeared. Thus, in order to fix the Cyberpunk 2077 map bug, you should roll back to your previous Nvidia driver. The new drivers are only important for the new RTX 4000 series, thus you will not lose much by skipping them. We hope that Nvidia and CD Projekt RED will find a solution for this issue. However, for now, the temporary solution we have offered will do the trick.

Looking for a list of working Township Redeem Codes 2022? You’ve come to the right…