How to get Catarina Armor

This set is worn by one of the NPCs, Siegward of Catarina. He can be found in the Undead Settlement. Here’s the route you need to take to get to him:

He’ll ask for your help, with vague details. You’ll have to leave the area, and once you come back, he won’t be there anymore. Take the elevator up, but jump off as soon as you see a platform by the side. Exit onto the terrace and you’ll see Siegward sitting on a ledge. He’ll ask you to fight a demon with him – if you stand aside and watch the demon kill him, you’ll get to pick up his armor and sword.

This is the fastest way to get it. If you want to, you could also finish his quest line and get it as a reward at the end, while having him survive. 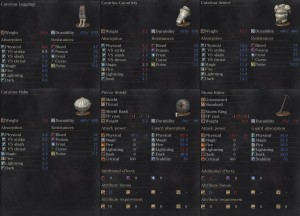 Description:
Greatsword with a broken blade, also known as the Giantslayer for the residual strength of storm that brings giants to their knees.

Yhorm the Giant once held two of these, but gave one to the humans who doubted him, and left the other to a dear friend before facing his fate as a Lord of Cinder.

The sword comes with a unique skill, which allows the user to apply lighting to the weapon, making it do additional lighting damage for a while. This is especially useful against giants.

NEXT POSTYuria of Londor | Dark Souls 3