Lapp’s armor set is an outfit in Dark Souls 3: Ringed City. It’s the armor worn by the amnesiac knight Lapp, an NPC you’ll meet in the Dreg Heap area. It’s a heavy armor with decent resistances and physical damage absorption. In this guide, we’re going to show you Dark Souls 3 Lapp’s armor set location & stats, as well as what it looks like.

How to get Lapp’s armor

There are two ways to obtain this armor set:

Description: Steel armor of the amnesiac Lapp. This plate-armor suit, that covers the body cleanly without even a slight gap, provides heavy defense. Quite fit to conceal a hollowed body, and indeed, one’s very identity. 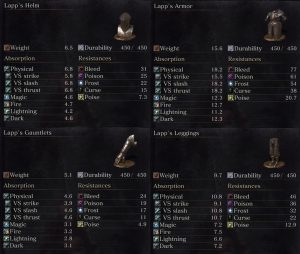 The armor is made of steel plate, and has a mild orange tint to it. The helmet looks like a bird’s beak. It’s definitely one of the better looking heavy armors, mostly thanks to the superb glint. It provides admirable physical damage absorption, but is somewhat lacking in protection from magic, fire, lightning and dark. The resistance to bleed and poison are great, although it’s only decent against frostbite, and weak against curse.