Nayzaga is one of the shock behemoths in Dauntless. For many players, it’s the first truly difficult boss. It has a bunch of unique moves, and it can be really hard to deal with if you come unprepared. To maximize your chance of success, it’s best to get a specific loadout and learn all the attacks in advance. If you’ve been having trouble with it, our Dauntless Nayzaga guide will tell you everything you need to know.

Which armor & weapons to use on Nayzaga?

The basics are pretty obvious – you should use shock armor and terra weapons. This way you’ll do the most damage, while receiving the least. We recommend using fast weapons for the Nayzaga fight, though – repeaters and chain blades work best, and you should have at least one of either in the team. Swords and war pikes are acceptable, while hammers and axes aren’t recommended for anyone but the most skilled players. 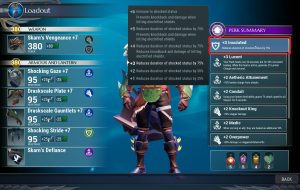 As for the armor, for your first encounter, you’ll have to user the Draskscale set. You should aim to get as many levels of the Insulated perk via cells. It reduces the duration of the shocked status, and is pretty essential here. The cells go into defense slots, so plan accordingly.

For later encounters, as well as fighting the Shockjaw Nayzaga, try to get Insulated to +6. You’ll become completely immune to shocks, and be able to destroy the shock barriers. You can get a bunch of levels for this perk from the Nayzaga boots (Shocking Stride) and the Stormclaw gloves (Lightning Gloves).

The physical attacks aren’t too big of an issue here – you’ll learn how to read and avoid them quickly enough. The real issue are the shock quills and the lightning balls they shoot (there’s a whole section devoted to dealing with them below). Here’s what to expect:

These are the worst part of the fight when you first encounter the Nayzaga. After it shoots, the quills stay around the arena and shoot shock bolts at slayers from time to time. The key here is knowing that you can damage them. Destroying the quills should be done as soon as they appear, and the best weapons for the job are the ones with the highest attack rate – the chain blades and pistols. The other weapons can easily miss, which make the whole process last longer than necessary.

If a bolt hits you, you’ll become shocked. You’ll take damage, and you won’t be able to use consumables or aether vents for a while, and you won’t be able to revive allies. Thankfully, you can either dodge the bolts, or strike them in order to change their course. This can be useful for either damaging the behemoth, or the quills themselves. Again, it’s best if you try this with a fast weapon.

The spines are especially dangerous once the Nayzaga turns aethercharged. When you see the quills on its back growing longer and lighting flashing around it, prepare yourself. It’ll shoot out five quills which will form a pylon. Then, it’ll power it up using lighting strikes, so make sure you’re not between the beast and the pylon. The pylon has a tonne of health, but when you destroy it, the boss will be interrupted and it’ll revert to its original state. Like the regular quills, it also charges for a while, then fires a shock bolt. When fighting the Shockjaw, there will be a force field around the quills which you can lower by sending the bolt back to them.

PREVIOUS POSTDauntless How to Interrupt With Hammer Special Secondary Attack