Not sure how to fix Death Stranding Error Code 51003? Hideo Kojima’s 2019 hit game was recently given away for free via the Epic Games Store. And those quick and lucky enough were able to snatch a Director’s Cut copy of the game before Epic realised the mistake. However, it seems that some issues are still here since the original release. If you are receiving the “Connection to Death Stranding game server is unstable. Switching to Offline Mode…” message, here’s what you need to know about it. 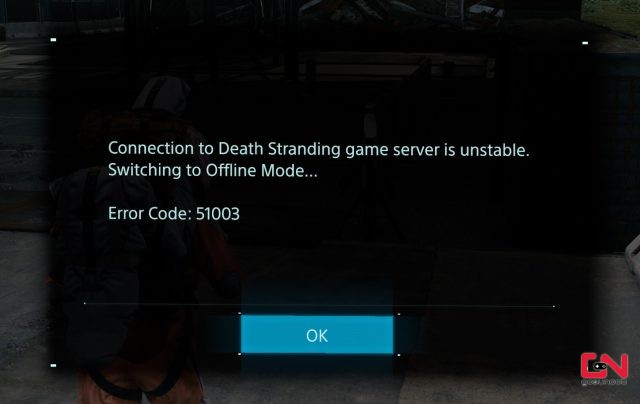 If you’re constantly being disconnected while playing Death Stranding, you should know that currently, that’s an issue experienced by many players who play the game since it was given away for free via the Epic Games Store. And the explanation is rather simple. Thus, let’s not beat around the bush and jump straight to the chance. Death Stranding Error Code 51003 appears for a simple reason – servers are overloaded and can not withstand a massive influx of new players who have jumped in to play the game. Despite being a single-player game, Death Stranding is what Hideo Kojima calls the first “strand game”. This new genre is distinguished by the game’s incorporation of social elements. Thus, while you are playing solo – what other people do matters.

However, as we stated, many people are currently playing the game, and the servers can not take on such a massive number of new players in such a short time. Thus, if you’ve been disconnected, this is the most likely the reason. For now, you should play offline solo and wait for the pressure on the servers to alleviate. If you are disconnected, you can try to reconnect by heading into system settings and selecting login. However, as long as the servers are overloaded, you’ll keep getting Death Stranding Error Code 51003. With that said, that’s all you need to know about the “Connection to Death Stranding game server is unstable. Switching to Offline Mode…” message.