Finding the Deathloop safe code in the cave with triangles in Updaam district during the morning is one of the hardest puzzle solutions I had to figure out. Deathloop certainly doesn’t lack in mysteries and puzzles. Unlocking the Updaam cave safe, though, is among the hardest. Solution to the cave safe code puzzle consists of several steps. The note that provides tips mentions triangles and their vertices as well as glyphs as part of the solution. That does not help much at first. Read on to find out how to open the cave safe and find the safe code by solving the triangles and vertices puzzle in Deathloop’s Updaam zone. 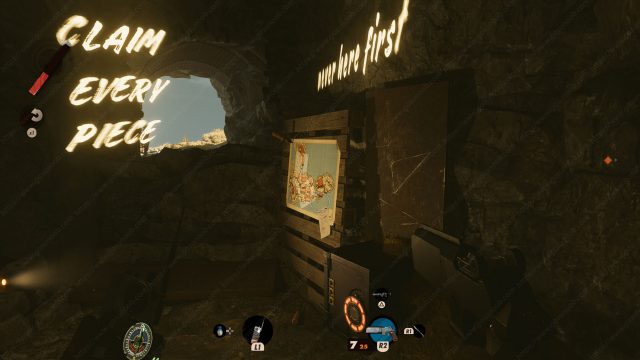 WARNING: Numbers and triangles for the safe code for each player are different! Do not use our numbers, but repeat the steps we took to find them. I’ll try and guide you step by step so I don’t spoil the whole thing for those that want to solve at least a part of the puzzle. Here’s what will be covered in this guide.

The puzzle itself can be found the very first time you visit Updaam. It is available during all four of game’s time periods. (morning, noon, afternoon, night.) As with anything in Deathloop you can reach it in several ways. From where you begin your adventure in Updaam go towards the library and try going around to the back of it. You can do this via the northern or southern road. You want to find Otto’s Workshop, which is a building on the north side of Updaam, past the library. Going a bit east of it, but before Aleksis’ mansion, there’s, what looks like, a chasm, but you can jump onto the bedrock and find a cave. Inside it is a safe with a map above it, a note and three triangles to the right of it. 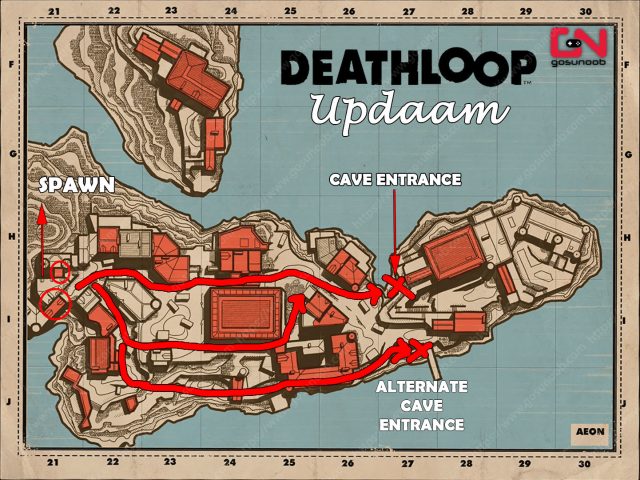 Updaam Triangle Map and Safe Puzzle near the Library

Once inside the cave you’ll find the safe and a map above it. The map has a triangle drawn on it as well as a skull and a ring glyph. There’s also two Xs and a circle with a question mark next to it. Another thing to note are three triangles etched into the metal on the right side of the map. Scribbled Notes are pinned onto the map and they are both helpful and useless. Here are the things you want to remember.

Looking at the safe you see it accepts three digits. Unlike many other safes in the game this one also has three lights. The first thing that took me a long time to figure out is that it needs three codes to open. This means you need to find three codes or nine digits. I first looked at the two X spots and the circle spot on the map and found three digits. Entering various combinations of these digits did nothing. I had to figure out what’s important in all the clues.

To open the Updaam cave safe you need codes to enter into the keypad. Your first goal is to find digits of the codes. You need to look at the map of the puzzle. Triangle drawn on it along with the marks and glyphs gives location of the digits. They are written on the walls of Updaam buildings at the spots marked by the triangle vertices and the three marks (circles and two X). Some of these numbers are not easy to spot. Bellow you will find explanations and screenshots to help you find each digit. Once again, you will get different numbers than I! Write down all the digits you find in your own game on a piece of paper next to the spot you found them at.

Exit the tunnels where you first spawn in Updaam at the beginning of the game and take the first right. You have an option to go up on the roof of the building there or follow the downhill path. That downhill path takes a ninety degree turn to the right. Around that corner is a van with two enemies chatting next to it. On the corner of that turn is a pillar that holds the upper structure. Look at it to find your first digit. 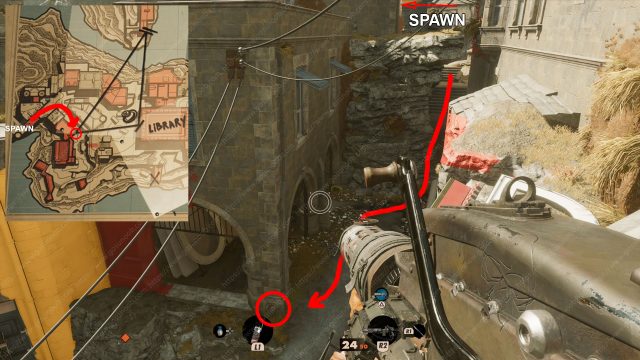 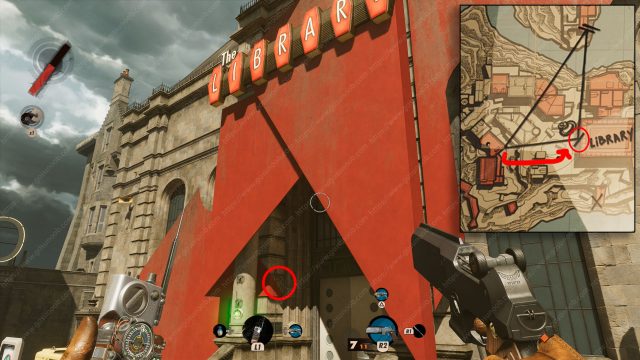 The last triangle vertex digit is very hard to spot. From the library go north through the archway. It’s the archway where you might have spotted two eternalists digging with pickaxes. You’ll notice a contraption that probably extends into a bridge if you power it. If you’re early on in the game. you can jump onto the ledge of the big unpowered building to the right of the archway. You want to get as close to the edge as possible. Zoom in with your weapon and look at the Condition Detachment building across the chasm. In the top left corner of the doorway of that building is the last triangle vertex related digit. If you unlocked traveling through time zones and visit Updaam at Noon the bridge will be deployed and you will easily see the number by approaching the doorway. 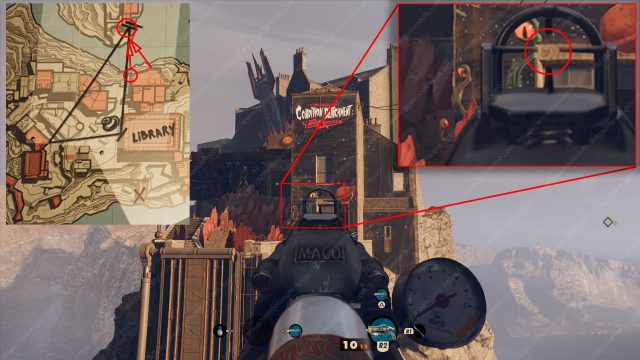 Next Three Number Locations from the Cave Puzzle Map

Your half way to finding digits for Updaam cave safe code. Drawn circle on the cave puzzle map has a question mark next to it. That location corresponds to the entrance into Otto’s workshop. Arriving there I found no number on the outside wall, but as I stepped to the left I found the digit. It was written next to the entrance into the first building left (northwest) of Otto’s Workshop. 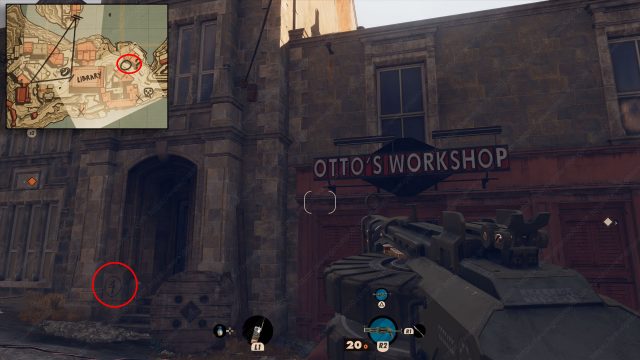 The fifth digit is next to the X with a skull next to it. This points to a location where there’s a kiosk with a glass window and one side of your (Carl’s) apartment building. From the kiosk look at Carl’s apartment building and you’ll see a closed down door with a plaque next to it. Plaque says “The Final Nights of Bad Luck Mary” and to the lower right of it is the second circled digit. 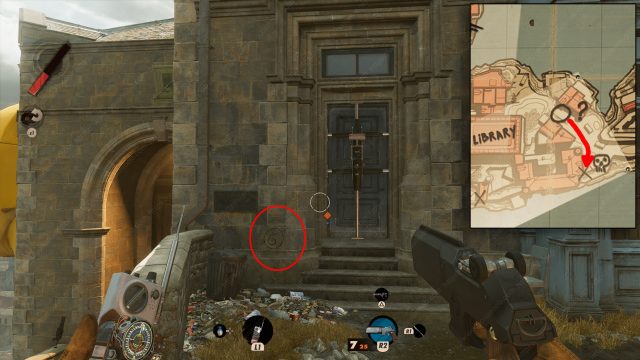 From the previous location jump to the lower left road. Keep going down it through the door and the big hallway/passageway. Out the next door you might come across a security camera and three to six enemies. Keep going down the road until you pass through the stone gate’s archway. You are in the area of the Moxie. Turn around towards the arched gate and look to the right of the arch. The number is written there. 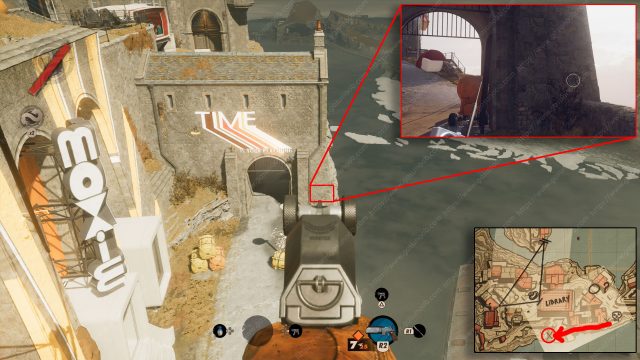 What I want you to do next is draw on a piece of paper the triangle and the two X marks and a circle and put the digits you just discovered next to its corresponding spots. WARNING! The digits you will see on the screenshot bellow are my own digits and will be different from yours! That is why you need to draw them yourself or use photo editing software on your own. 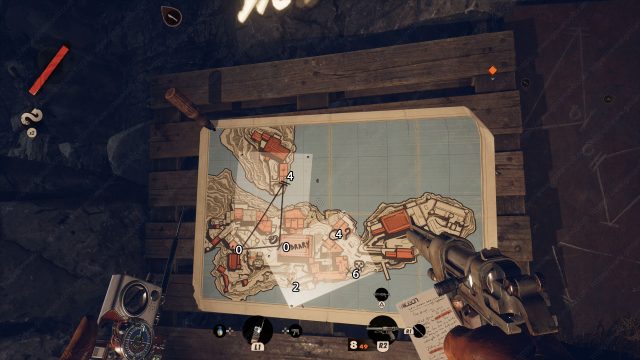 The last step of the puzzle took me couple of hours to figure out. I had six digits and needed three safe combinations of three digits. Then I looked at the triangles etched into the metal right of the map. The topmost is the first triangle and is the same as the one drawn on the map. The second one has a ring glyph in its top left vertex. The third triangle had a skull glyph in its bottom right corner. (WARNING: You might have completely different triangles in your game from mine with glyphs in different places. The principle remains the same though. Use mine as an example.) Each triangle represents one safe code. I need to superimpose the triangles on the right over the map and the glyphs and numbers on the left. I need to put the triangles in such way that glyphs overlap.

How to Solve the Triangle Puzzle in the Updaam Cave?

The first thing you need to know that the triangles are random for each player as well as the digits! As I said before, you need to superimpose the three triangles right of the map onto the map. You superimpose them so that glyphs match their position on the map. You either use some sort of photo editing software or draw it on a piece of paper or do it in your head. The point is that a ring on the triangle on the right is put on top of the ring drawn on the map. Same goes for the skull glyph; if a triangle on the right has a skull glyph next to it superimpose it over the map so that the skull is in the same position.

After superimposing the triangles on the right over the map you should now have the six digits you found corresponding to vertices on the triangles. First triangle tells you the first code for the safe. Middle triangle reveals the second code and bottom triangle is for the third safe code.

Order of Digits in the Safe Puzzle

All that’s left to be done is order the digits in the correct order and you’ll get your cave safe codes. To do that you need to notice that triangles each have no dash, one dash or two dashes over their vertices. This gives a hint which digit is the first, second or third in the safe code. In the following image the first triangle is black, second triangle is green and the third triangle is red. WARNING: Use this as an example only. Your numbers and triangles might have different shapes, glyphs and dashes. 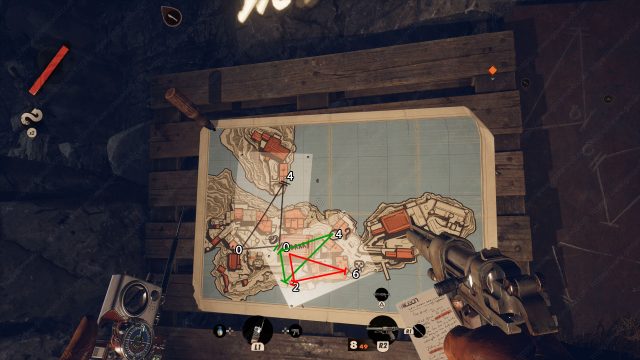 For me the first cave safe code was 004. Second was 420. Last code can be tricky because the third triangle on the wall had its corners erased. It could have been 602 or 062. Enter both and one of them will surely be correct. You need to repeat the process for yourself with the numbers you got in your game. You can’t use my combinations because they are random for each console and PC that plays the game.

I know I might have gotten a bit carried away with explanation of the cave safe code puzzle. I wanted to give you the solution step by step so you can then just get help for portion of the puzzle that troubles you. For those of you not bothered by the whole principle here’s the steps you need to take to solve the puzzle.

Safe in a Cave Beneath Aleksis’ Mansion Rewards

We’re threading heavy into spoiler territory so be warned. The reward is this shiny flask. You can’t interact with it unless you progressed into the main story a bit. Once you get to the point of the main story where you can harvest Residuum you will know what the shiny flask is for. Harvesting it nets 5000 Residuum, which is much more than most of these items. Once you figure this code out you can come back each loop and pick up the free 5000 Residuum. 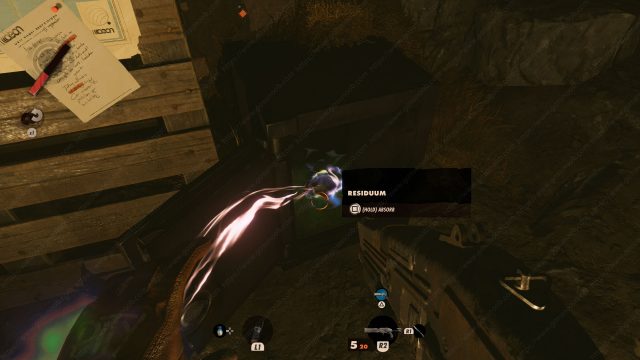 Solving the Cave safe code puzzle in Deathloop was extremely satisfying (and hard). Solving it was reward in itself. It was one of the more challenging things to do in any video game since Myst and The Witness. I hope you find our description of how we got the solution and how you can find your own safe codes helpful. If you have any trouble leave us a comment bellow and we’ll try and help. You can also check out our youtube video showing all this in action.

Overwatch 2 Twitch Drops, How to Get Sukajan Kiriko Skin

Not sure how to claim the legendary Sukajan Kiriko skin via Overwatch 2 Twitch Drops?…