The Sleeper Simulant is an exotic fusion rifle in Destiny: The Taken King. The shots it fires pierce enemies and bounce off hard surfaces.
▼Article Continues Below▼
To get it, you’ll have to finish a long chain of quests for the Gunsmith. In this guide, we’re going to show you how to obtain Sleeper Simulant. 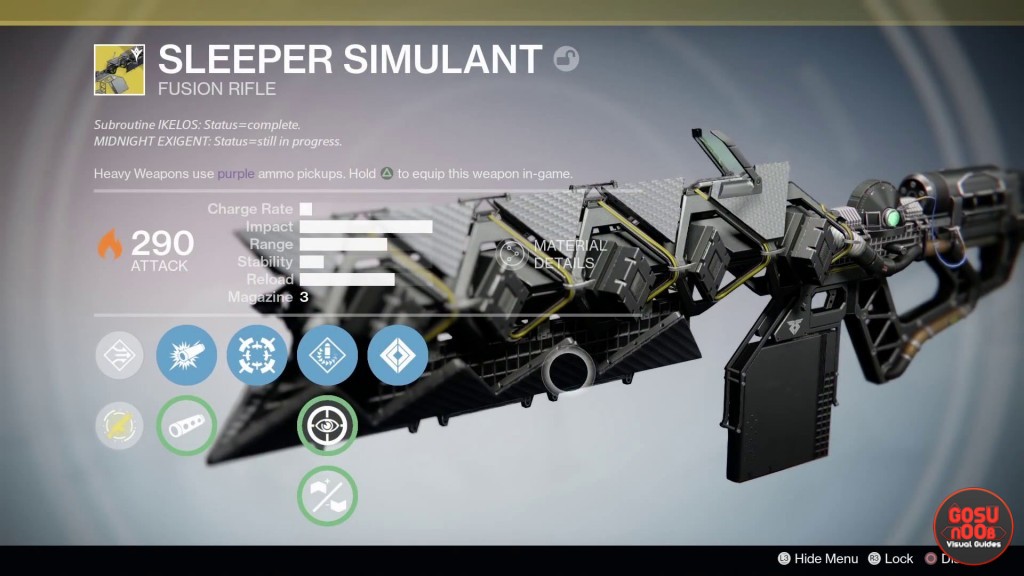 Before starting the quest, you’ll have to collect 4 DVALIN relic fusion rifles and give them to the Gunsmith. They drop randomly in locations on Earth, Mars, Venus and the Moon. This will open up The First Firewall quest on Earth, but only on certain days. If you miss the window of opportunity, you can try tagging along with someone who already activated/finished it – when you complete it, you’ll be able to finish the rest of the quests normally.

When you’ve finished the quest, you’ll obtain the Curious Transciever.

In order to progress, you’ll need to input 4 codes into the Transciever. These codes correspond to the spawning order of the knights in the previous quest (Hive is upper, Taken is lower).

This will unlock a quest called Shadow Fall, which requires you do reach the top of Devil’s Spire in under 4 minutes. You’ll be rewarded with an IKELOS fusion core.

How to fix Ikelos Fusion Core

You need to get 5 parts from different activities to repair the core:Finding them all will grant you the Reassembled IKELOS Fusion Core, which you need to take to the Gunsmith. After a daily reset, he’ll give you the next quest – The Sleeper Stirs. It will task you with completing the Fallen SABER strike at Light level 280, and reward you with a Sleeper Simulant Weapon Frame. When you bring this item to the Gunsmith, he’ll give you the exotic fusion rifle of your dreams.