Each class gets new legendary gear set: Hesperos for Titans, Azoth Bend for Warlocks, and Neuroghast for Hunters. 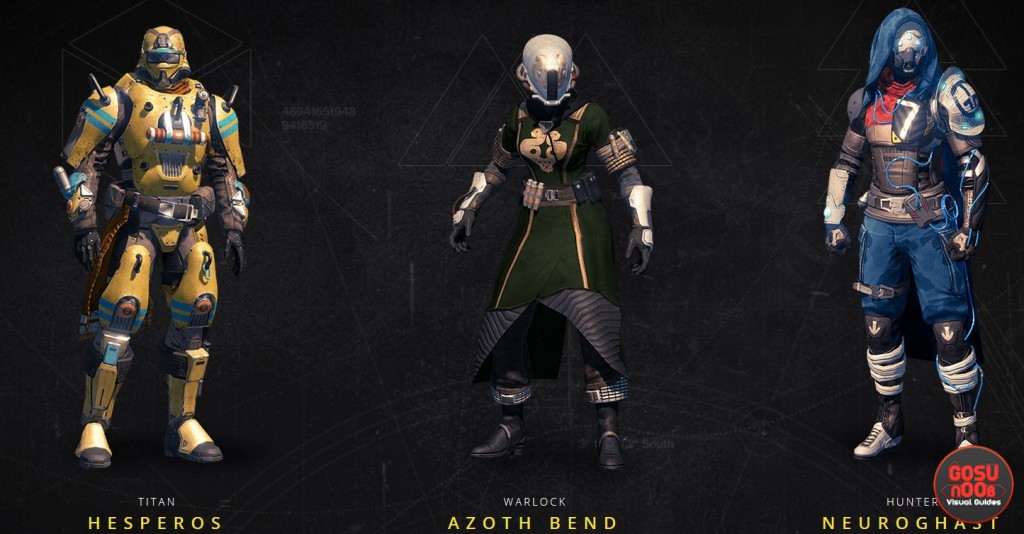 Hesperos – Built to honor the Hesperonauts, the first human astronauts to land on Venus, the Hespero armor is built to withstand excruciating heat and pressure. Don it to remember the Golden Age of peace and exploration

Azoth Bend – The millennia-long search for true alchemy ends with the Warlock. Bend the infinitesimal mysteries of matter and energy to your will.

Neuroghast – Neuroghast armor enables a perfect union of mind and body, through the interface of lightweight fieldweave, transcranial sensoria and cytogel exowiring. Become an elite assassin with all the power of both machine and man.

The Jade Rabbit is an Exotic scout rifle with a little cartoon rabbit on the grip. This scout rifle comes with The Fate of All Fools perk that produces massive precision damage.

The moon-dwelling Jade Rabbit of yore is made manifest in this adorably deadly exotic scout rifle. Sporting a 13-shot magazine and a sniper-like scope, the Jade Rabbit is a lethal combination of kinetic power and long-range accuracy.

Attempting to unravel your once-decisive victory against Sekrion (from the Destiny strike, “The Nexus”), the Vex are constructing a time bridge to call the Nexus Mind from the past in order to execute a terrible future.

New PvP map Sector 618 takes place on Earth, and will be exclusive to PS4 players until Fall 2016.

Once a part of the mighty Cosmodrome wall, Sector 618 fell long ago to the Fallen House of Devils. Now reclaimed by the City, the beams and walkways of the wall’s interior are in dangerous disrepair—thus, an ideal location for the Crucible’s grueling games.