Diablo Immortal is designed as an action MMORPG, but that doesn’t mean that you can’t play it solo. In fact, you can play most of the story missions as a single-player campaign. And while there are some story dungeons that are advised to be played in a group, you can still play it alone if you wish so. In this guide, we revealed which class is the best to play solo PvE in Diablo Immortal, and why we think so. 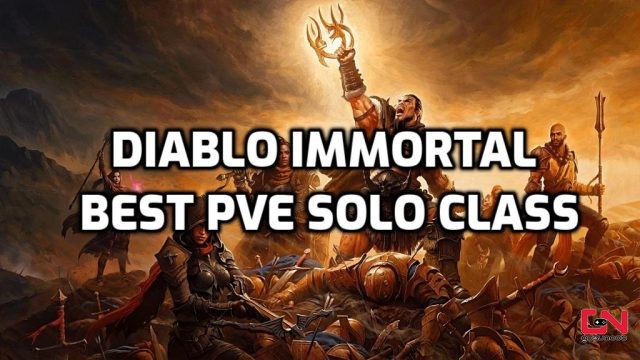 What is the Best Class for Solo PvE in Diablo Immortal?

Ultimately, this depends on your personal preferences and desired playstyle. However, in our opinion, the Necromancer is by far the best class for solo play in Diablo Immortal. The good old Necro possesses an array of useful tools which allow the class to be played solo. For starters, Necro is the only summoner class in the game. His skeletons will be the core part of your early levelling, allowing you to safely destroy enemies from the distance.

Your Skeletons primarily act as sponges for damage, but will also create buffer zones between you and the enemies and deal some nice damage themselves. This goes perfectly with other CC (crowd control) spells. You will constantly keep groups of enemies at bay while dealing devastating damage with your other spells. When cast in a timely manner, Corpse Explosion can literally obliterate the whole screen of enemies.

Not only that Necromancers excel at clearing story zones, but they are also fantastic for clearing dungeon solo for the same reasons. Bone Spikes are a superb CC tool that is also capable of dealing a decent amount of damage. It is a charging ability, but you have plenty of time to wind it up to the max, as skeletons will protect you. In the late game, you’ll unlock another powerful summons to aid you in a battle, such as Bone Golem and Skeletal Mage. Ultimately, despite playing solo, you’ll never play alone as a Necromancer. And that’s why they are the best solo class in Diablo Immortal.

NEXT POSTModern Warfare 2 Reveal Date, Time & How to Watch