Diablo Immortal’s boss Blood Rose acts both as a main-story boss and as a world boss during the Dark Wood zone event. Zone events and world bosses are new MMO mechanics introduced in Diablo Immortal. These are server-wide events where players can join forces to defeat powerful world bosses and collect plentiful rewards. However, many players don’t know where to find the Blood Rose during the Purify the Corruption event. And what’s worse, they have a hard time killing it, because she always heals back to full. In this guide, we explain where to find the Blood Rose and how to kill it. 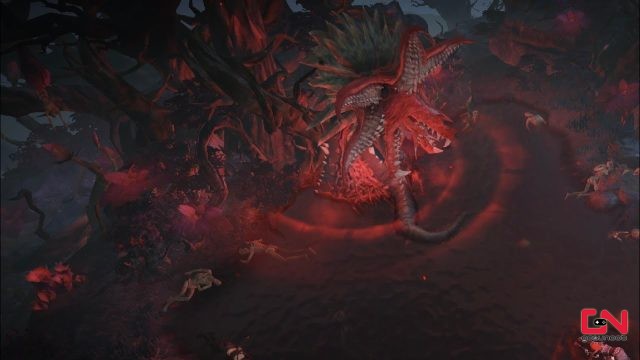 The zone event content is only available on Hell 1 or harder difficulties. These harder difficulties (Hell 1, Hell 2, Hell 3, and Hell 4) will unlock once you beat the main story on normal difficulty and reach level 60 on a character. You will not be able to see any zone events prior to Hell 1, because higher difficulty levels each operate as separate worlds on a server.Once you reach level 60 with a character, switch the difficulty to Hell 1, and the Zone Events content will become available to you. Now head into the Dark Wood, and start participating in the Purify the Corruption event. During this event, you’ll need to fill your corruption meter, and killing the Blood Rose will earn you 28% per cent of that corruption. Thus, it is the most efficient way to reach 100% corruption.

You will find the Blood Rose at the same place where she always is, in the west-most corner of the Dark Wood past the Sanguine Ruins if you’re coming from the North, or following the path to the northwest if you are entering from the Cursed Grove.

Like with most of the world bosses, players will need to challenge the Blood Rose in a group, as she has a ridiculous amount of health, and thus it requires high amounts of DPS in order to be taken down. Most of the mechanics in a battle against the Rose are fairly straightforward, but there’s one thing that’s particularly problematic. Namely, she has an AoE ability which allows her to heal back to full health if players stand in the zone of her damage. This ability “sucks in” players towards her, while inflicting damage and healing herself in the process. All players fighting her need to avoid her life-sucking circle of death, and you’ll defeat her fairly easily.