If you don’t know how to locate the Fleshcraft Hydra and Sandstone Golem in Diablo Immortal, we’ve got you covered! The Diablo universe is known for its many unspeakable horrors and demonic creatures from the deepest corners of hell. In Diablo Immortal, we’ll encounter numerous hideous beasts. But, not many are as powerful as the Fleshcraft Hydra and Sandstone Golem. They are the world bosses, a new type of end-game enemies. In this guide, we explain how to summon these bosses, and what conditions you need to meet for that to happen. 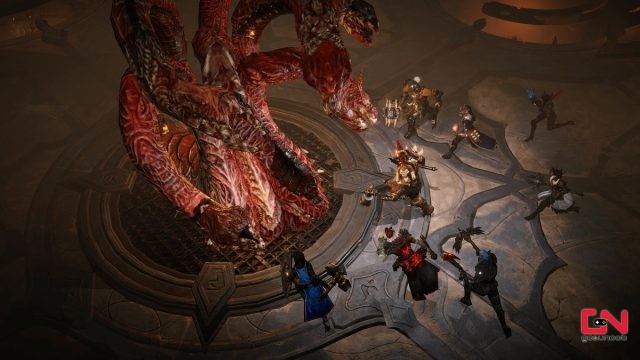 There is exactly one way in which players can locate the Fleshcraft Hydra in Diablo Immortal. You can find both the Fleshcraft Hydra and Sandstone Golem in the Library of Zoltun Kulle. You’ll reach this area naturally as you progress through the story. However, they don’t just simply appear there for you. You’ll need to summon them.

And you’ll summon them by collecting the “Lost Pages” in the Library of Zoltun Kulle. They are scattered randomly around the library, you’ll recognize them as piles of scribbles. Once you get five of these, you’ll create a Portal Tome and unlock the “Kulle’s Hidden Chambers”. Here’s the in-game explanation of this event:

These “Kulle’s Hidden Chambers” are essentially small sub-dungeons. They are the hidden part of the Library of Zoltun Kulle. When you get a Portal Tome, one of these chambers will randomly open. At that point, you’ll have ~2 minutes to reach the spawning point. Other players in the area will also be informed about the event, as both the Hydra and the Sandstone Golem are the so-called “world bosses”. This means that everyone can attack them and they will spew a whole bunch of loot. When it comes to the exact location, the Fleshcraft Hydra can be found in the Hydra’s Lair just to the left of the Writhing Ingress waypoint.

NEXT POSTTame Frogs in Minecraft