A Diablo game wouldn’t be a true Diablo title without powerful and memorable bosses to beat, and Diablo Immortal is no different in this regard. Officer Hagan is one of these bosses. There’s even an Achievement for beating him. However, many players are having a hard time finding him. In this Diablo Immortal Officer Hagan Spawn Time & Location guide, we are going to explain where to find him, how often he spawns there, as well as share a couple of hints about how best to get the Achievement for defeating him. 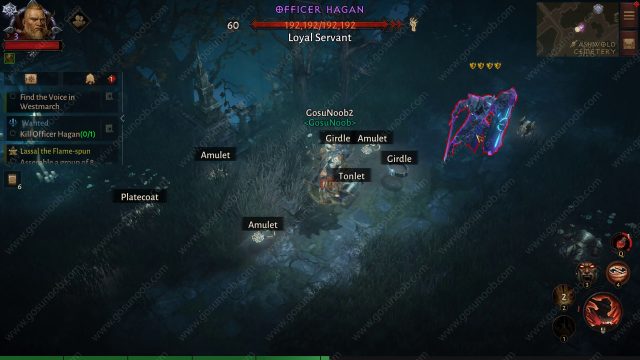 Officer Hagan can be found in Ashwold Cemetary. Go to the Mad King’s Breach Waypoint there and you will find him a short distance away from Ashwold Manor. We’ve marked the exact location in our screenshot below. Though, as we’ll see in the next section, you may have to wait quite a bit for him to appear.

Officer Hagan spawns once every 30 minutes. This means that you may need to spend a lot of time waiting for him until he finally appears. This is further complicated by the fact that, if you are gunning for the associated Achievement you get from him, you will need to kill him five times. This is already a substantial time investment, but it gets even worse. Only the first person who lands the initial blow on him will be eligible for getting the “credit” for the kill. So, if you are battling him with a party, you should probably discuss this among yourselves before engaging him. In any case, like most other bosses – Officer Hagan can be very difficult to take down. Stay mobile and look out for his attacks and you should be able to overcome him.