Dishonored 2 lets you play as either Corvo Attano or Emily Kaldwin. One of the burning questions about the game is whether you can switch characters. Will you be able to switch between Emily and Corvo at will, or will you be stuck with your choice forever? If the developers allow it, then how will we change characters in Dishonored 2? 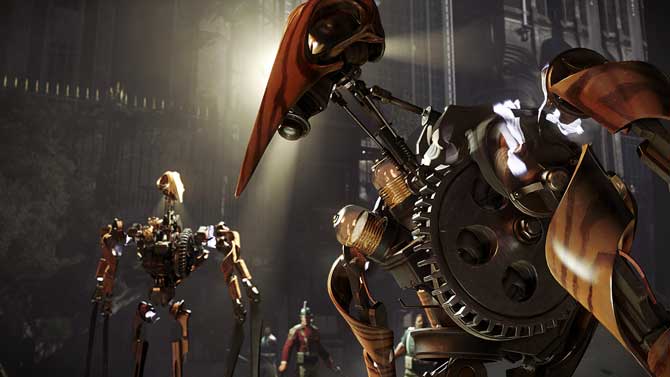 How to change characters in Dishonored 2

Unfortunately, you can’t switch between Emily and Corvo in Dishonored 2. At the beginning of the game, you play as Emily for a few minutes, and after the inciting incident you will get to choose between Emily and Corvo at that point. From that point on you will be playing with whatever character you have chosen. We suggest making a save just before, in case you change your mind in the future.Both Emily and Corvo play very similarly, but they have different powers. Either way, both of them are very fun and engaging to play as.

Emily has a different set of powers compared to Corvo. Using the far reach ability, Emily can pull herself rapidly across a distance. Domino is a great ability, you can link multiple targets that will share the same fate. Knocking down one of them will make all of them fall at the same time. Mesmerize can be used to quickly stun your enemies while you slip pass unnoticed. Doppelganger will summon a shadow of Emily that attracts the enemies. An upgraded doppelganger can attack, you can swap places with it, or even summon 2 shadows at once. The last one is Shadow Walk, where Emily assumes a stealthier form for a short amount of time.

Corvo’s powers haven’t changed from the first Dishonored game. You can still use the blink to traverse rapidly across distances and Dark Vision to see in the dark and through walls. Devouring Swarm will summon a group of rats that will attack enemies on sight. Bend time will allow you to manipulate time, you can slow or even stop time completely. Possession will allow you to take control of another body while windblast will shatter doors and deflect projectiles.All the powers can be upgraded in multiple ways to suit your needs, so choose carefully.