Masks are appearance customization items in The Division 2. They’re very rare, and there’s only a handful of them. They’re like hockey masks of various colors, with pictures and ornaments on them. You’ll get them by fighting secret bosses called hunters, which can only be summoned if you follow certain steps. Our Division 2 Mask locations guide will show you where to find ghould, death, diamond, cross, crimson, midas, revenant, demon and wraith masks.

Where to find Ghoul mask?

To get the ghoul mask, you’ll need to go to the sewers beneath the National Mall. The manhole is near the Lincoln Memorial, on the west side of the park. Drop down and follow the tunnel until you reach a big room. Head up the stairs and to the left, and you’ll see a laptop by a wall. Interact with it, and a light will shine on the map hanging on the wall.

The location marked on the map is in the middle of the reflecting pool up in the park. Go there during the night, and you’ll see some scaffolding rising up from the debris. There will be a flickering light bulb on it – shoot the bulb and you’ll summon the hunter. 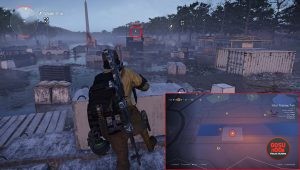 How to get Diamond, Cross, Death, Phantom masks?

You can get these four at the same spot, by defeating a group of four hunters. They’re in the park north of East Mall, the one where the Pavillion cafe is. Go into the cafe and a approach the counter. There will be a lever on the side, by the green coffee maker. Pull it, then head outside and down the steps, to the Christmas tree. The hunters will ambush you there, and each one will drop a mask.

Where to find Crimson mask?

The crimson mask is on a hunter in the National Portrait Gallery. It’s the big building with the collonade and a holiday market stand out front, a block northeast of the Theater settlement. Go into the courtyard, then head to the lobby on the south. Interact with the phone there, then return to the courtyard and go into the lobby on the north side. Interact with the counter and head back into the atrium – the hunter will be waiting for you.

How to get Demon mask?

Go to the building on the southern edge of the Downtown East district, halfway between the White House and the Theater settlement. Go through the metro to get to the territory control event. Once you’re in the building, climb the stairs and turn right immediately twice. Climb up to the grassy platform and look up at the windows across the hall. You’ll see four shooting range targets, which you need to shoot, going from the highest to the lowest one. The hunter will appear below once you do.

These two masks can be found at the Potomac Event Center, in the West End area. Approach the building’s entrance, and you’ll see several small pools in front of the field hospital. Get into the one on the right and start doing jumping jacks (using the emote). Two hunters will spawn nearby, and each will drop one mask.

Where to find Wraith mask?

This one can be found southwest of Capitol Hill, in the southeastern corner of the map. There’s monument there, a big stone slab with names of fallen soldiers on it. There’s a pool and a flagpole in front of it. Go there during the night and use the salute emote in front of it until the hunter spawns. It may take more than a few tries. Most people report success with around six – if he doesn’t appear, try moving around the flag.

How to get Specter & Ghost masks?

In order to get these two, you’ll have to go to the Washington Monument, on the east side of West Potomac Park. Go into the base of the monument at night (some say you need to be there at 20:05), and rappel down the elevator shaft. You’ll see a console there. Interact with it, and the screen’ll show you three locations nearby.

Each of these is a grave – you’ll have to visit all three and salute them. After you’ve done that, go back to the basement and interact with the console again. When you leave the building, you’ll see a red circle on the floor – enter it, and the first hunter will spawn. The other one will appear randomly in the area around the monument – watch your UI, as it’ll flicker when he’s nearby.