Tom Clancy’s The Division is an upcoming cover based Third Person Shooter Massive Multiplayer Online Role Playing Game made by Ubisoft. I know, that’s a lot of words to describe a game, but hang in there, I’ll go through each segment. The closed beta build of the game has been available to the public this past weekend and we’ve spent some 20+ hours with it to give you some of our initial impressions and tell you what you can expect to see once it’s fully released. 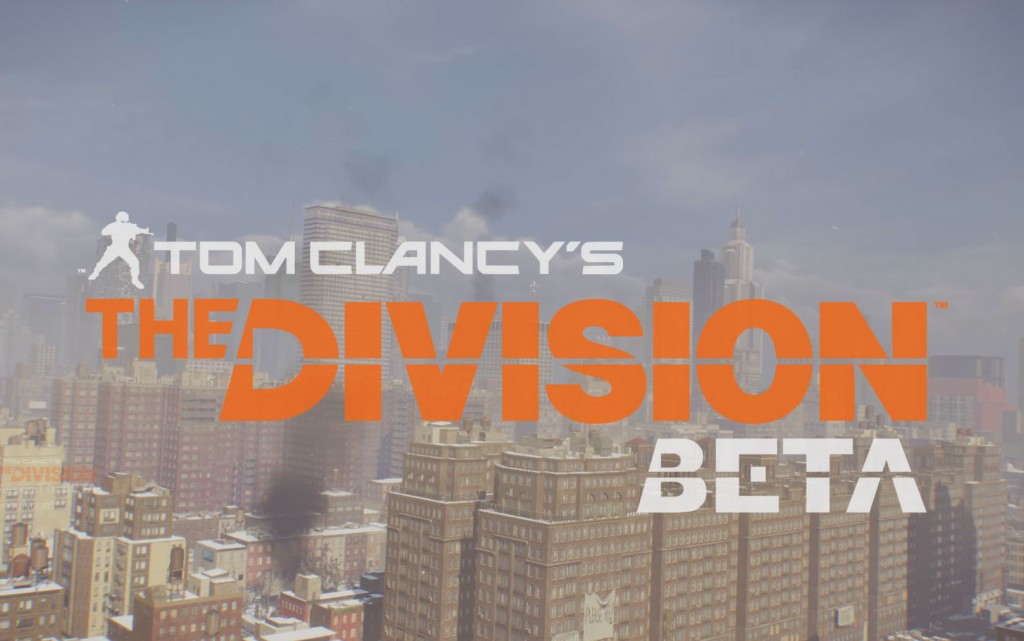 The Story so far

New York has been hit with some sort of virus and the streets are in disarray. Both civilians and the military are in a complete mess and you seem to be a member of a special group called the Division, which was kept in secret for just such scenarios. The beta begins several hours into it (the final release will certainly tell us the proper story) as you are dropped into Camp Hudson in New York. This is where you’ll first encounter the MMORPG aspect of the game. There are vendors about, NPCs that will give you side quests and a Notice Board (the hallmark of many a RPG). You will also notice a multitude of other, live players going about their business and you can even interact with them to invite them to a group or inspect their gear and rank.

Once you venture out into the streets of New York you will be blown away by the details with which it’s depicted in the game. There are civilians staggering about asking for help, fighting each other or discussing their worries and troubles. The streets are littered with junk and each corner and building is just full of stuff to look at. There is a day and night cycle and the weather can change from time to time (it is winter, so expect to come across a blizzard or a foggy morning) which just helps you completely immerse yourself into the surroundings. Graphically, the game is done very well. On PC, you can adjust a lot of settings to get the detail level just right, without sacrificing performance. To run the game on the highest settings smoothly you will need a monster PC, but even with lowered details it looks and feels just right. We initially played the Xbox One version, where graphics details aren’t in line with what can be done on the PC, and it still looked pretty darn good. What I noticed is that The Division is very taxing on your CPU. With an Intel i7 and GTX970 in our test rig, I had trouble doing anything else (like streaming) when running on Ultra settings. 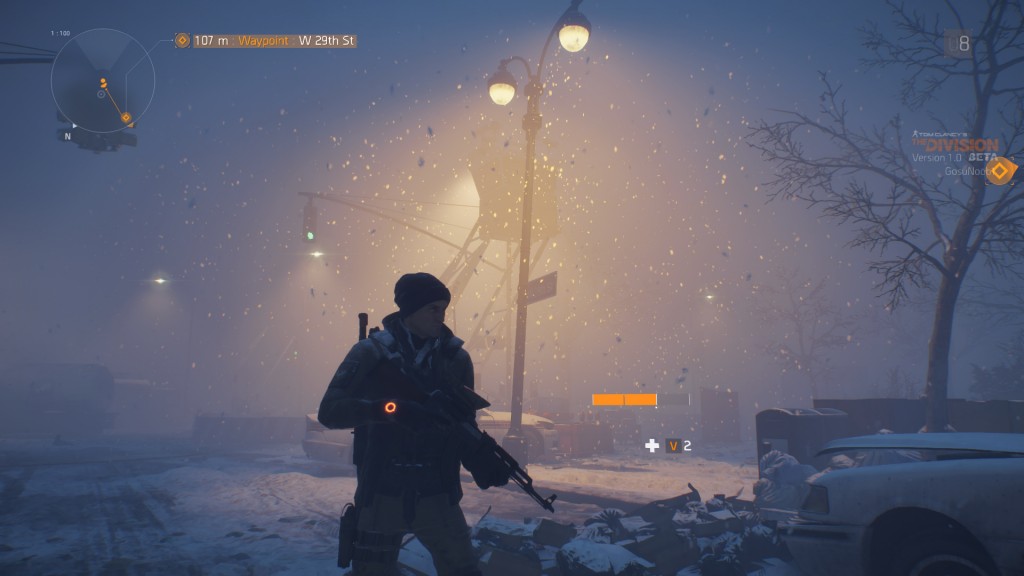 The fighting is based on you moving into cover and waiting for a good opportunity to shoot back at your opponents. This is all very familiar to anyone who’s ever played a similar game (I had strong flashbacks of Watchdogs and Prototype at times). You can use two special skills at a time, from a selection of many. Skills are unlocked by doing side mission and upgrading your base of operations. Nothing we haven’t seen before. The major difference here being that you can actually invite your friends and go through the city in a group. Even if you don’t have any friends currently online, you can use the matchmaking system to find other people to play with. This culminates when you get a chance to play the first group mission (Maddison Field Hospital). You can play it solo, but you can use the matchmaking system on the spot and change the difficulty of the mission to hard and play it with a group. This makes the enemies much harder (elite enemies for you MMORPG fans there), but gear and monetary rewards are much higher once completed. I’ve seen people look for farming groups to get the best gear this beta had to offer by farming the Hospital instance.

The star of the game are the Dark Zones. These multiplayer areas have their own set of rules. You can enter them alone or in a group. Everyone and everything in there are targets. Killing NPCs or other players produces Dark Zone currency, XP and gear! To actually be able to use this gear, you will have to go through the process of extraction. It is done by calling a helicopter, and everyone in the zone is alerted that someone called for the extraction chopper. You then have to wait two minutes for it to arrive and once it does, you can attach your looted gear and it will become available in your stash. The trick here is that there could be a group of player griefers coming to your position to kill you, loot your hard earned gear and use the extraction for themselves. Even if you are lucky enough that there are no “bad” players around, NPCs might spawn and they would all be harder than your average mobs. People in your own group can decide to betray you and relieve you of all the hard earned loot. The Dark Zone is a lot of fun to play, because everyone and everything is fair game – only your own moral guidelines will dictate what you’ll do. 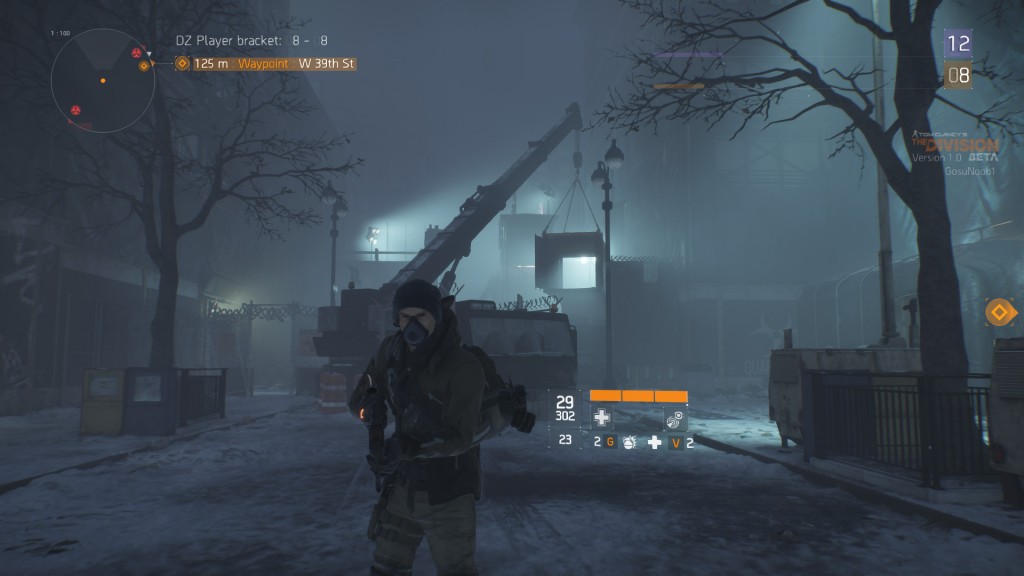 Those two minutes while you’re waiting for the chopper to arrive can be a very intense experience. Even when there are a lot of “friendly” players in the extraction zone (you can talk to them through proximity voice chat) you’ll always fear that one of them will decide to go postal, throw a bomb and take your precious loot for themselves. I had snipers camping on the roof opposite the extraction area kill me and pick up my stuff. On the other hand, I had groups of friendly people protect smaller groups as they extracted the loot. This was the most fun I had in the game. The only thing that worries me is that I came across a guy that discovered an exploit in the game that made him invisible. He just went around murdering everyone and everything without consequence (if you decide to attack other players and kill them, you become marked by the game and other players can hunt you down). I am glad this happened in the beta and that Ubisoft has time to fix such game-breaking bugs by the time of the final release.

The Division has a lot to offer. The shooting mechanic is fun and action packed. MMORPG enthusiasts will find all the familiar hallmarks of the genre as well. They can keep themselves busy by doing various side missions, craft gear (it was not available in the beta), hunt for equipment in PvE dungeons or PvP Dark Zones and do all of that alongside friends. At one point, you unlock your home base and by doing side activities you get resources with which you can upgrade it. This will unlock new skills, perks and abilities. The RPG progression is tightly connected to the content of the game that way. I am glad that you can change your skills and build your character pretty much anyway you want. That way you can play any role you want: if you want to be a DPS machine – get that sticky bomb and blow some faces; if you want to help your group – equip the healing skill; if you need someone to scout for enemy players in PvP – use the scanner skill to discover them. 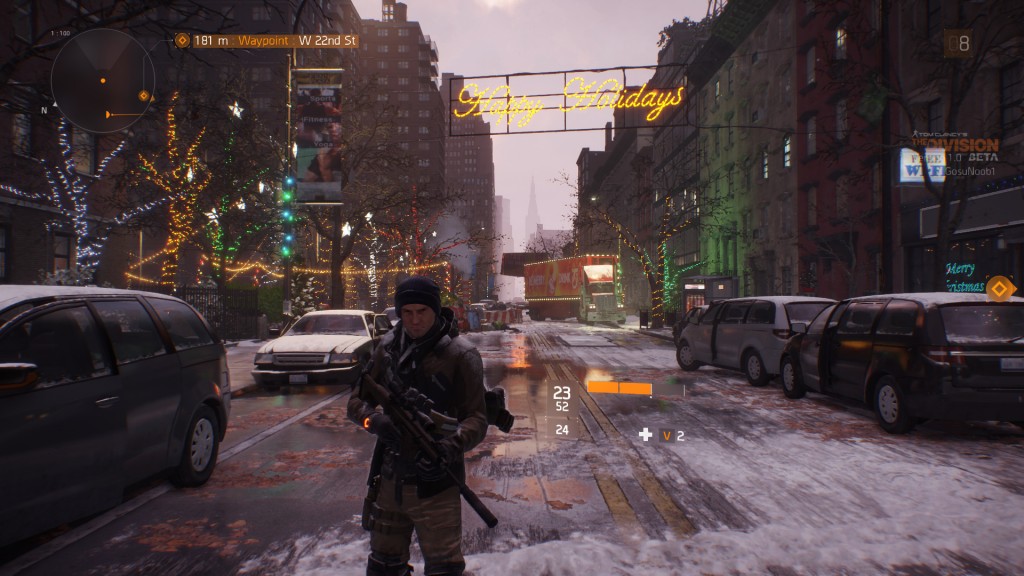 The content available in the beta could be consumed in about 10 hours with additional 5 hours to really get the gist of the Dark Zone. We do not know how much bigger the map will be in the final game, but the beta build promised that you will see at least another 12 zones and 4 Dark zones. This looks like it might end up being anywhere between 70 and 100 hours of gameplay, with the potential to extend indefinitely through multiplayer activities. I had fun with the game and enjoyed traversing the marvelous looking streets of New York. I wish the enemy AI was better, and there were bugs/exploits that I found to be very worrisome, but all in all I can’t complain about my experience with the Division. As a veteran of many MMORPGs I may not be as excited about grinding through another 300 quests until the level cap, but the shooting section of the game and the Dark Zones had me playing into the night. If Ubisoft manages to keep a tight grip on the exploits and bugs, and handles the standard caveats of the MMORPG genre, players interested in this type of action oriented game should get their friends and take a journey through the chaotic New York streets of The Division.